CAUSE AND COROLLARY (some text hidden)

The Toyota Corolla was for a very long time something of an enigma. How could this car land the title of World's Best Selling Car whilst at the same time being thoroughly dull? The 1997 generation Corolla started to put a bit of substance behind the sales, but it wasn't until the Mk 10 model appeared in late 2001 that Toyota genuinely had a car to be proud of. With excellent build quality and a range of top-notch engines, the Corolla put up a worthy challenge to cars like the Ford Focus and the Honda Civic. With three and five door hatches, a saloon, a compact estate as well as Verso mini-MPV models, four trim levels and six engines to choose from, choice isn't a problem for Corolla buyers. Used car buyers benefit from Toyota's peerless reputation for reliability and a market that hasn't quite realised what a great car the Corolla is.

It has long been a Toyota tactic to carpet bomb the market with Corolla variants and the Mk 10 car was no exception. Bar perhaps an open-topped roadster, Toyota seemed to blanket every possible corner of the family hatch sector possible with the Corolla from three-door hot hatch right up to five-door mini-MPV. What was different this time around was that the Corolla was a genuinely attractive car, a car which needed to appeal to both private buyers and the increasingly demanding corporate user-chooser. A new system of model designations was introduced when the car first appeared in late 2001. Out went the usual S, GS, SR and GLS trim levels a number of old Corollas had campaigned with and in came a ladder that went T2, T3, plush T Spirit and dynamic T Sport. Four petrol engines were offered starting with a 96bhp 1.4i, followed by a popular 110bhp 1.6-litre powerplant. Two 1.8-litre engines were offered, either in 'conventional' 133bhp guise or in manic 189bhp T Sport tune. A pair of D4-D diesel engines were also offered in either 90 or 110bhp form. Verso mini-MPVs hit the dealerships first, quickly followed by three and five door hatches with estates and saloons hot on their heels. Summer 2004 saw a major facelift brought to bear across the Corolla range. A 89bhp 1.4-litre D4-D diesel replaced the 2.0-litre D4-D engine with the same output and styling revisions served to freshen up the exterior. The larger teardrop shaped headlamps were the most prominent addition. The 189bhp T Sport model never really caught on in the face of competition from exciting alternatives like Honda's Civic TYPE-R and in 2005, Toyota introduced the 215bhp T Sport Compressor to try and redress the balance. The Corolla dynasty was ended early in 2007 by the arrival of the Auris family hatchback.

What You Getword count: 273

Designed in France, this Corolla was created with European tastes very much in mind. Like its rival, the Fiat Stilo, the Toyota's styling does little to betray the parent company's nationality, instead opting for the sort of clean, global village look that many pundits would pigeonhole as Germanic. Not so. Yes, there's more than a hint of Audi A3 in the rear three-quarter view of the three-door variant and the interior is Teutonically dark: but then, such features were firmly in vogue at the time. Modern car design now transcends national borders, and the Corolla was prima facie evidence. Quality was the first area of improvement. Toyota quite unashamedly used the Volkswagen Golf as its quality benchmark and the cabin therefore features silicone-damped grab handles, soft-touch plastics on the fascia, enough rubber-lined recesses to put a twinkle in the eye of a back-bench Tory MP and doors that say thunk rather than ding when they close. Closer inspection shows little evidence of corner cutting. Although the steering wheel only adjusts for height, it's easy to obtain a comfortable driving position and the sheer ease and intuitiveness of all the minor controls is a testament to Toyota's understanding of how we interact with a car. The Verso mini-MPV variant is interesting, with the usual five seater slide/tilt/remove capability for the rear seats, although some will doubtless baulk at the rather strange 'broken back' styling previously seen on the Alfa 75. It also features a different fascia to the more mainstream models with a dash-mounted gearstick in the style of the Honda Stream. Predictably, it also includes a good deal more cubbyhole and stowage space. 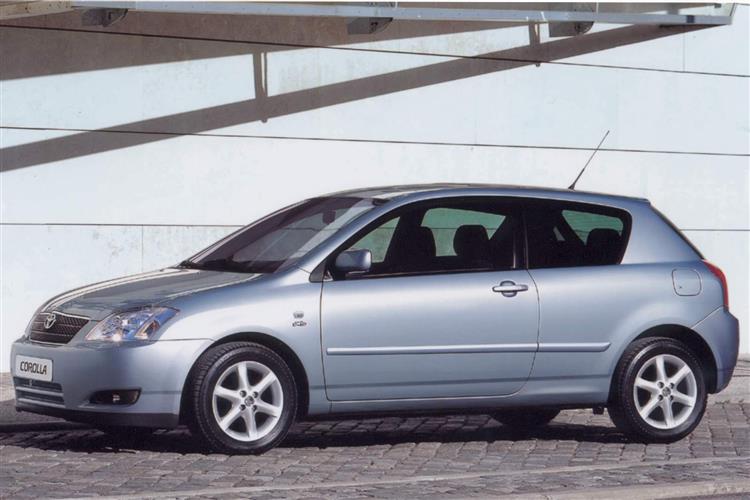