Lexus, the luxury arm of Toyota, has never been afraid to go its own way. While most of the prestige marques decided that the cleanest and most economical approach to powering big cars was through diesel, Lexus thought otherwise. They decided instead to shun the diesel option and stick with a big petrol V6 but added a secret ingredient - an electric motor aiding the petrol unit. The result was the GS450h. Today there are hybrids aplenty and it's a challenge to think back just a few years to a time when this technology was still the province of relatively small cars. Lexus showed how it could be done, blending proven but still advanced technology with classic V6 petrol power. The result is model that delivers all the merits of luxurious executive saloon motoring and highly respectable performance, along with admirable fuel economy and emissions. The Lexus reputation for excellent build quality has only been underscored by the hybrid's track record.

The launch of hybrid technology in this GS back in May 2006 was not a gamble or a marketing ploy. The technology adopted on the GS450h had been tried and tested on the Toyota Prius so beloved by California celebs. While the Prius is seen as the ecologically sound way to motor, the result of adapting the technology for the much bigger Lexus is a car powered by a 335bhp 3.5 litre V6 petrol engine (there's no diesel) that is not only relatively frugal and green (emitting no exhaust fumes at all slow speeds) but which is stunningly fleet of foot as the electric motor gives the car immense acceleration. A top speed of 155mph may be limited but 0-62mph in just 5.9s will outdrag a Porsche Boxster while also delivering only 180g/km of CO2 and fuel figures nudging 40mpg. It's quite an accomplishment. This car enjoyed a mild cosmetic facelift in 2008 with the introduction of revised door mirrors featuring integrated indicators, and blue hybrid logo badges. In 2010 Lexus announced a recall affecting the GS450h after concerns were raised about the engine valve operating system in some models and fears that degraded springs could break, causing engine misfires and rough engine performance.

What You Getword count: 370

The GS is distinctive as the rear windscreen is steeply raked with just a hint of hatchback about it and there is a purposeful, grounded, low attitude on the road. Inside, this Lexus comes loaded with equipment. There are pre-crash seatbelt and brake assist functions with pre-crash brake technology, front, side, curtain and knee airbags and ABS. Front seats get active headrests to restrict whiplash injury in a rear-end shunt. The "smart" key is standard to automatically unlock the car as you approach. Standard too are electrically adjustable front seats and a steering column which retracts as you remove the ignition key and returns to pre-set position when you start up. The clever climate control is another standard fit item and "sniffs" outside air to measure its quality and automatically switches to recirculating mode if traffic fumes get too bad. Entry level cars get automatic climate control, a six disc CD player, wood trim and electric folding door mirrors, while the SE models add leather upholstery, rear parking camera and sat nav. Find a used SE-L and you will also get adaptive cruise control which brakes automatically when the radar-based system detects you are getting too close to the car in front. Your garage will need to be on the large side if it is to cope with a car that is more than 4.8metres long, 1.8 metres wide and 1.43 metres tall. One thing you don't get with the car is a big boot. Other Lexus models like the GS300 and GS430 offer 420-litres of room in the boot but the space-stealing battery in the hybrid leaves a boot of only 280-litres, nor can you fold down the rear seats should you need more space. This affects rear passenger comfort. The GS hybrid is a genuine four-seater but the sloping roof, space-stealing battery and large transmission tunnel, all mean legroom and to a lesser extent headroom are not quite as generous as they should be. Given the car's performance, fuel economy is very good. The GS450h returns combined fuel figures of 35.8mpg and a carbon dioxide emissions figure of 180g/km. The car falls into the Group 17 or 18 insurance bracket with service intervals every 12months or 10,000 miles. 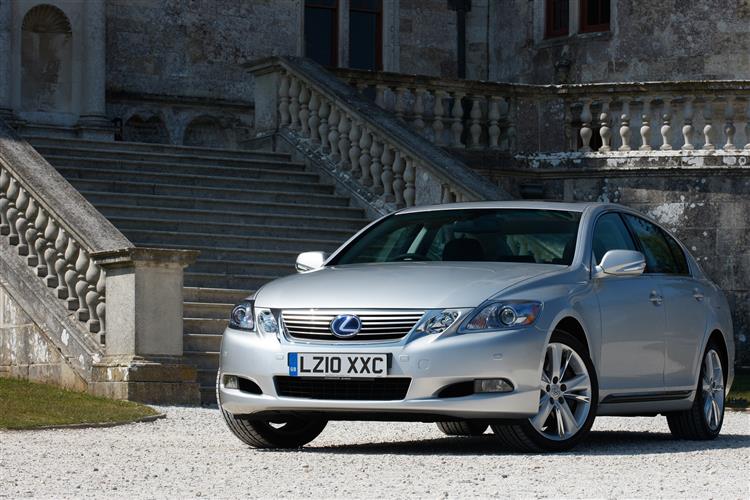