SECONDS OUT, ROUND TWO (some text hidden)

Improving on the Boxster has to be one of motoring's toughest assignments but that was the position Porsche's designers and product planners found themselves in at the turn of the millennium. The first generation car had massively exceeded even their most optimistic sales projections and was the car responsible fro taking Porsche from the edge of financial meltdown to a position where it could afford to buy 20 per cent of the Volkswagen Group. The second generation Boxster was a surprisingly restrained item, nudging the car in the right direction in myriad ways without significantly altering the basic proposition. A used example won't be cheap but it will definitely be enjoyable.

It shows just how far Porsche has come that the predecessor to the Boxster was the 968, itself a facelifted 944 which, in turn, was a beefed up 924, a car that first appeared in 1975. Therefore the 1996 Boxster was replacing some very creaky architecture. To understand the Mk2 Boxster, a quick primer on the Mk1 is probably in order. This model started out as a 2.5-litre car, the big change coming in 1999 when the base engine grew to 2.7-litres and a punchy 3.2-litre S model was introduced. Not a lot changed for the following five years. It didn't need to. The Boxster ruled supreme. When the changes did come, Porsche was clearly wary of killing the goose that was laying golden eggs quicker than it could shovel them into a basket. The second generation car appeared in dealers in November 2004 and the basic recipe was much the same. The silhouette was almost identical: again there was a 2.7-litre entry-level car and a 3.2-litre S, but the detailing had cleaned up considerably. The side vents grew shaper, the headlamps rounder and interior quality was much improved. Summer 2006 saw some more detail changes, the most substantive being a power upgrade to correspond with that of the newly-introduced Cayman coupe - effectively a Boxster coupe that Porsche somehow had the chutzpah to charge a premium for. Whereas the models once made 240bhp and 280bhp respectively, power was eased up to 245bhp for the 2.7-litre car and a 295bhp for the Boxster S, a car which also saw its capacity rise from 3.2-litres to 3.4. In early 2009, Porsche was at it again. The 2.7-litre engine was replaced by a 2.9-lkitre unit while the 3.4-litre in the Boxster S received 310bhp and Porsche Direct Fuel Injection technology. The PDK double clutch gearbox was introduced as was a launch control function. A year later, the Boxster Spyder arrived with a 320bhp version of the 3.4-litre engine, weight saving measures and extreme styling modifications that included doing away with the electric roof.

What You Getword count: 197

The Boxster is an astonishingly capable car. Traditional Porsche design cues are everywhere, belying the car's position in the range. The dashboard is now 911-style as is the breathy wheeze of the flat-six engine behind you. Whichever Boxster model you choose, it's a car that makes you feel a million dollars, especially with the hood down and the engine at full chat. The hood mechanism is almost worth the price of admission by itself. Pressing a single button will electrically raise the rear deck and unfold the hood until it tautens before it can then be latched onto the windscreen header rail. In all it takes just 12 seconds and although rivals such as the Mercedes SLK have taken this trick and refined it still further, the Boxster's hood still draws admiring glances. The Porsche is also surprisingly practical. The front and rear boots can actually swallow a surprising amount of bags, and the Tiptronic cars make town driving painless. This sort of car, often having lived its life gently perambulating suburban high streets, makes the best used buy. Watch out however, for the example you come across every so often that has been treated far harder. 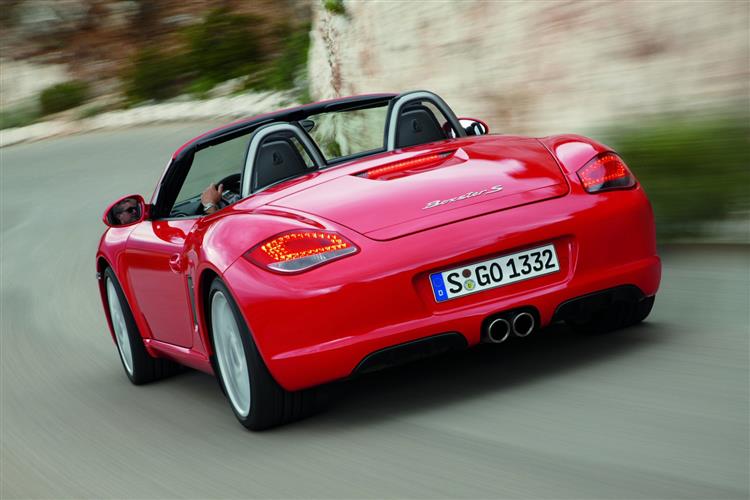