As a nation we like a bit of grief. Hand wringing sometimes seems to be a national pastime. Those looking forward to getting all dewy-eyed and nostalgic over the passing of Citroen's massively successful Saxo model weren't given much of an opportunity to get the black armbands on. With the launch of the C2 model in September 2003, Citroen showed that it was straight back with its 'A' game. Used examples are currently doing the round at very attractive prices.

After the mild disappointment engendered by the cuddly C3 model, Citroen knew that they had to produce a more sporting and youth-oriented car to sate the appetites of those weaned for years on a steady diet of Saxos. The C2 was just that car, released in the UK in September 2003. The styling took a little getting used to, at first looking like a C3 front grafted onto an entirely more angular rear end but, like many bold designs, what initially looks a little odd can bed in nicely. The range consisted of a budget 1.1-litre model and mainstream 1.4-litre petrol and diesel versions. A VTR sports model with a 1.6-litre 110bhp engine and a sequential paddle-shift gearchange was also introduced and was an instant hit. More sports models soon followed. For those who were less than enamoured with the sequential gearbox, Citroen introduced the C2 GT in December 2003, a car mechanically similar to the VTR but fitted with a standard manual box. This too sold very well but rumours of a forthcoming VTS model were causing some customers to hold their horses. When it did appear in summer 2004, younger buyers had no excuse. With 130bhp on tap, a manual gearchange and an insurance rating fully six groups lower than the old Saxo VTS model, Citroen dealers were besieged by younger drivers falling over themselves to find a dotted line on which to sign. Alterations to the car introduced in Autumn 2005 saw an all-new dashboard introduced with square buttons replacing the previous round efforts, higher grade plastics and silver detailing. The Sensodrive gearbox was also improved and a 1.4HDi Furio model became available. These C2 derivatives can be spotted by the clear section in their tail light clusters. The C2 Stop & Start was introduced in Spring 2006. Equipped with the 1.4-litre petrol engine and the Sensodrive automatic gearbox, it switches its engine off to save fuel when the vehicle is stationary, restarting it automatically when it's time to move off. The autumn of 2007 brought a new range topper to the C2 line-up. The 110bhp VTS HDi delivered 64mpg and punchy performance. In Summer 2008, there was a minor restyle which brought what Citroen hoped was a smarter and more 'distinctive' front radiator grille and an 'imposing' one-piece front bumper. There were also 'cooler' trim colours and equipment upgrades that now included lateral airbags on many models and features like an MP3-compatible stereo even on the entry-level C2 Vibe. To make the purchase decision easier, the C2 line-up was simplified to four trim levels - Vibe, Rhythm, VTR and VTS. The clever 'Stop & Start' model was now more affordable too, thanks to this technology's availability in budget Rhythm trim.

What You Getword count: 469

Although it shares its chassis, drivetrains and a number of body and interior parts with the C3, don't think of this car as merely a scaled down version of Citroen's spherical supermini. The styling marks a different direction with a C3-style bulbous nose allied to a far edgier, angular back end. Although to some it might look like the results of two design studies fused at the door pillars, it's certainly distinctive. The side windows adopt a staggered line while the rear haunches blister out in a purposeful fashion. The VTR might be over shadowed by the VTS but it certainly looks the part with colour-keyed bumpers and a subtle sill'n'spoiler kit, although if you opt for the 1.4i Furio model, you'll get the cosmetic addenda without the punchier engine. Whichever C2 model you opt for, you'll find a car that maximises its use of available space very effectively. Despite being even shorter than a Saxo, it's easily able to seat four in comfort. Lessons have been learned from the reception given to the C3 interior and the C2 adopts many of the funkier styling touches such as the ventilation system and the bar rev counter and introduces a few of its own. Interior materials quality has been improved where possible and there's a wide range of trim choices from sober monotones right up to the most extrovert two-tone designs. The steering adjusts for rake and reach in all versions while plusher trims also get a height adjustable seat. Few will have any cause for complaint given the amount of space in the front of the cabin as it feels no smaller than the C3, a car already renowned for its spaciousness. Like the C3, the C2 gets a can holder ahead of the gear lever as well as generously proportioned door bins that can accommodate a 500ml bottle of pop. Access to the rear isn't bad and Citroen have displayed admirable pragmatism in failing to pretend that the C2 is anything other than a four seater. So many small cars cram three belts in across the back and end up trussing occupants up like a leg of lamb but the two rear seats of the C2 are well sculpted and respectable in terms of knee and shoulder room although taller passengers may feel the sloping roof impinges on their coif. Opt for upspec models and the rear seats individually slide, recline, fold and tumble. This allows the owner to optimise luggage or passenger space by sliding the seats on runners but in order to fold the rear seats fully flat, the front ones need to be run a long way forward, precluding this possibility for long legged drivers and front passengers. All versions nevertheless get a tailgate that splits into two sections to ease loading in tight spots. 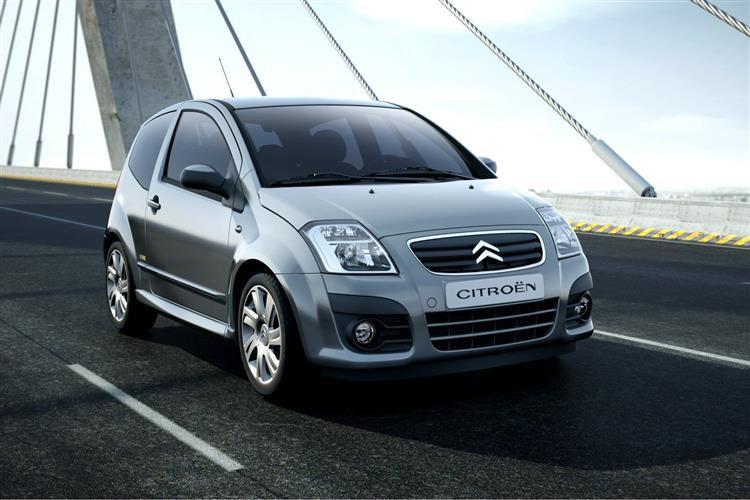