If the idea of a mini-MPV fills you with dread fear not, for SEAT have a stylish solution. The Altea may not be the biggest or even the cleverest mini-MPV in its class but it's definitely one of the most fun to drive and makes a tempting ownership proposition. Low pricing from new tends to make bargain used buys but the word is out on the Altea and low mileage bargains are thin on the ground. Here's what to look for.

Launched in May 2004, the Altea was the first SEAT to adopt the styling cues of the Salsa show car. Although the Toledo and the Leon would soon follow suit, it took the public some time to get to grips with the new direction and sales were initially rather slow. Before too long, however, a favourable press and some aggressive pricing pushed the Altea into the limelight and it's now one of the Spanish company's most popular lines. At launch, there were four engines, a pair of petrols in 1.6 and 2.0-litre capacities and two turbodiesels. Buyers got to choose either the rather old fashioned 1.9-litre unit or the rather more modern 2.0-litre. In the middle of 2006, the range became a whole lot sportier with the introduction of the FR trim level. This added spoilers and bigger alloys to the Altea package but, more significantly, it also delivered a 170bhp version of the 2.0-litre TDI engine and a 2.0-litre turbocharged petrol unit with 200bhp. The extended Altea XL version was announced late in 2006. At 18.7cm longer than the standard car it boosted luggage capacity from 409 to 532 litres. The DSG paddle shift gearbox was available on the sporty FR model from late 2006. The Freetrack 4x4 variant was introduced in 2.0-litre petrol TSI and 2.0 TDI 170 guise in September 2007. Revisions in mid 2009 saw the 2.0-litre turbo engine axed along with the FR trim level. The other trims were renamed S, SE and Sport while the range-topping diesel engine was replaced by another 2.0-litre 168bhp unit, this one using common-rail injection technology. The interior materials and design were improved and the front of the car got sleeker headlights with a reshaped grille and a smaller SEAT badge. The Freetrack 4x4 remained untouched.

What You Getword count: 319

First shown at the 2003 Frankfurt Motor Show, the reaction to the Altea was so positive that SEAT's paymasters, the Audi Brand Group (Audi, SEAT and Lamborghini), threw everything into turning the car into a production reality. Just five months after its debut under the tungsten lights, it was ready to roll into dealerships. It's a significant precursor of what's to come from SEAT. The huge radiator grille with prominent 'S' logo, the almond-shaped headlamps and the 'dynamic line' that runs from the front wheel arch over the doors to the rear wheel are all styling traits that SEAT's design director, Steve Lewis, proposes to incorporate into all the marque's forthcoming models. The Altea unashamedly offers five spacious seats rather than seven cramped ones but weighs in with some innovative thinking. The side profile has the same 33:66 glass to metal ratio that features on so many sports cars and gives the Altea a far higher waisted and more dynamic look than, say, a Volkswagen Touran. Inside, there are more than thirty places to stow and stash goodies, including a supersized glove compartment, big storage bins on all four doors, drawers under the front seat and even a storage area under the boot floor. Even the parcel shelf has a storage cubby incorporated within. The two-tiered boot has a capacity of over 400 litres. The rear bench is a 60/40 split affair with a fold down armrest incorporating cupholders. As befits SEAT's position within the sportier Audi side of Volkswagen's empire, the seats are supportive and the steering is meaty, the multi-adjustable wheel making it easy to find a decent driving position. The trim and build quality, whilst maybe not the most exciting in terms of colour choices and materials, is nevertheless of a relentlessly high quality. The Altea's greatest party trick is definitely the windscreen wipers - spot them if you can. Clue: they're hidden in the A-pillars. 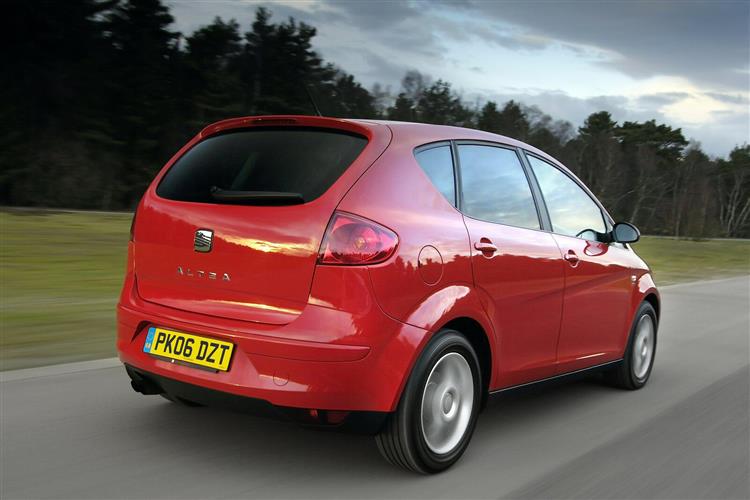