THE LEON KING (some text hidden)

Although the British public hasn't warmed to this version of the SEAT Leon in quite the way they did its predecessor, there's little doubt that it's a very competent car and one that's well worth tracking down on the used market. Reluctant take up from new often spells used bargains and this Leon is an excellent example of these market forces at work.

It's no exaggeration to say that the MK1 SEAT Leon, especially in Cupra guise, developed into a cult car in the UK. I can remember that this car was my pat answer for a good few years for any of my colleagues looking to spend around £15k on a new car. Unfortunately, I've never come close to that stage with the Leon's second generation iteration, launched in this country in late 2005. Although there is very little wrong with the car in an objective sense, the styling didn't cut the mustard for many and the value proposition no longer seemed quite so special with Skoda having upped its game. Cars like the Renaultsport Megane and the Ford Focus ST arrived to rule the hot hatch roost and standard Focus models as well as increasingly aggressively priced Golfs make big numbers among the family hatches at the Leon's expense. Competition even came from within SEAT with quick and capable Altea models more than justifying their existence. SEAT took their eye off the ball rather by failing to launch a sporty FR model until July 2006 and delaying the launch of the red hot Cupra variant until December 2006. Quite why it took them so long to bring these key models to market (the old Cupra accounted for over half of all UK Leon sales) is down to VW Group internal politics but it robbed the model of crucial momentum and both the FR and Cupra were unfairly overlooked when they did arrive. In the Spring of 2008, SEAT introduced the 122bhp 1.4-litre TSI turbocharged petrol engine in to the range. Then a facelift was introduced the summer of 2009 which involved a redesign of the lights and front bumper, improved trim materials and an enlarged rear windscreen to improve visibility. The 2.0-litre TDI 170 FR model got a common-rail diesel engine in place of the old direct injection unit.

What You Getword count: 304

It's worth reminding ourselves what a SEAT Leon actually is. We've become very taken with hotter Cupra versions of the Leon over the years, but Britain is a special case, and in mainland Europe, it's the more prosaic models that plump up SEAT's profit margins. Therefore, there's a slight disconnect between how we perceive the Leon and how our European neighbours do. To us, a Leon is a snorting hot hatch that offers terrific value for money and Germanic build quality all wrapped up with a strong sporting pedigree. Think Jason Plato doorhandling Yvan Muller out of the way in his SEAT touring car. That's only a small segment of what the Leon represents to SEAT. In reality, it must go head to head with some of the class best in the shape of the Ford Focus, the Vauxhall Astra, the Renault Megane and the Honda Civic. Therefore it was with some disappointment that the first pictures of the 'cooking' Leon models dropped across my desk sometime in 2005. There had already been quite some controversy at how similar looking the Altea and Toledo models were, and now here was another model that would require serious scrutiny to establish exactly what SEAT we were dealing with. To make things worse, it wasn't clear exactly what advantage a Leon had over an Altea. All three cars were born from the same Salsa concept car under the aegis of SEAT design chief Steve Lewis and all three, rather unsurprisingly, run on the same platform. Although the tape measure shows that the new Leon is only around an inch taller than its predecessor, the base models have a definite MPV look and feel to them. It's only with the sportier FR and Cupra models that the Leon begins to look convincingly racy. Perhaps that was the point. 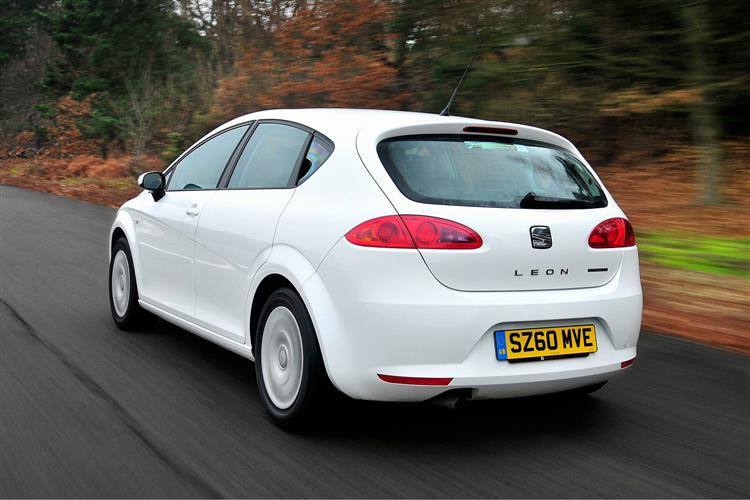