AN OPEN AND SHUT CASE (some text hidden)

Even though the original C70 was launched way back in 1997, it's still something of a novelty for many to see a sleek and curvaceous Volvo product. The post '06 C70 remains one of the best looking coupe-convertible cars around, its lines doing a good job disguising the long boot that's required to house the roof in cars like this. In fact, it's tough to believe that the C70 rides on Ford's C1 platform, the chassis that it bases the Focus range on. As a used buy, it makes a lot of sense as the only real point counting against the C70 is that its price from new is stretching the limit of what a car of this size and provenance should ask.

Some cars were never particularly good yet somehow wormed their way into the national affection. Just such a car was the MK1 Volvo C70. The first spy shots were seen in 1994 and they were enough to get letters of intent flooding into Volvo dealers. It was good looking and solidly screwed together and this, along with the other Volvo corporate values, were enough for most customers. The fact that it wasn't particularly great to drive was beside the point. Sales were strong and the car lasted right through to 2006. Its successor is, by any objective measure, a massively superior proposition. Melding the coupe and convertible versions of the old C70 into one car, the 2006 C70 features a folding hard top roof and a sharp chassis. It has also singularly failed to capture the imagination of the market in the way its less able predecessor did. Perhaps this is as a function of improved competitors or the fact that savvy car buyers realised that there wasn't a vast amount of difference between the C70 and the Ford Focus CC in their basic architecture. Nevertheless, the Volvo remains a well respected product. Perhaps aware of the premium pricing issue, Volvo took steps to reduce the C70's perceived cost by introducing keenly-priced 2.0-litre diesel variants in autumn 2007. In late 2009, the car was facelifted with more stylish headlamps, reshaped front wings, in-vogue LED tail lamps, a redesigned instrument panel and plusher fabrics.

What You Getword count: 296

Unveiled at the 2005 Frankfurt Show, this C70 retains the sleek good looks of its predecessor, but augments the offering with a folding hard top and improved driving manners. With the hood in place, you probably wouldn't guess that the C70 is capable of flipping its lid. The rear deck isn't overly long (the usual giveaway) and the roofline is smooth and beautifully integrated with the rest of the bodywork. The old C70 coupe used to sell within five seconds of customers clapping eyes on it and this generation model has proved similarly successful. After all, many of the basic ingredients are much the same. The stance and proportioning are similar, it'll still sit four adults in comfort and it still adheres to Volvo's impeccably high safety standards. Volvo developed this C70 to offer new standards of preventive and protective safety in the convertible market, the car including an advanced body structure, greater torsional rigidity and several innovations that make it unique among open-top cars. An example of this is the door-mounted Inflatable Curtain (IC), part of the C70's integrated Side Impact Protection System (SIPS). As the IC cannot be fitted in the roof, as with the rest of the Volvo range, it has been innovatively fitted in the door to inflate upwards instead of downwards. Volvo's safety engineers have also fine-tuned the IC to be extra stiff, so it can stay upright and help protect the head more effectively. In addition, the curtain then deflates more slowly to provide additional protection if the car rolls over. Also adding to the safety of the car is a torsionally rigid body. Improving the driving experience is another benefit of a stiff chassis and the C70 is stiffer than its predecessor by between 10 and 15 per cent. 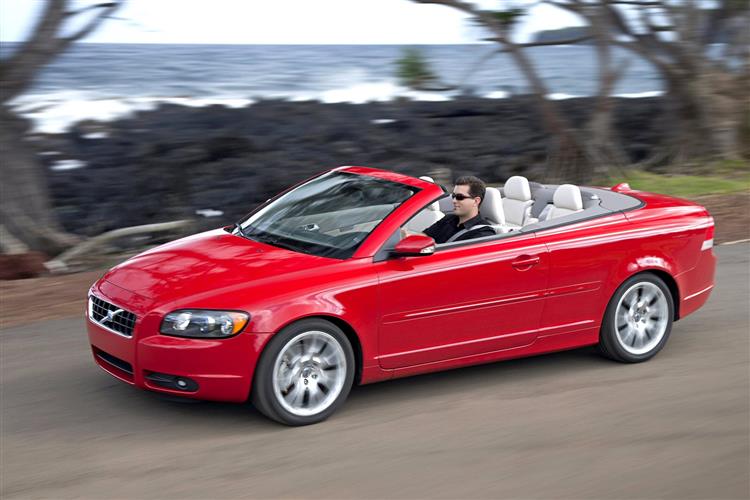