CREDIT WHERE IT'S DUE (some text hidden)

Jeep held out a surprising amount of time before gingerly bringing its first soft-roader to market. Here was a brand built on uncompromising reliability and dauntless prowess in the rough stuff but it knew only too well where the money was. Staying out of the burgeoning market for compact road-going 4x4 vehicles would have been a difficult one to justify at the shareholders meeting so Jeep clamped its gnashers around the bullet and unveiled the Compass. By no means was this a case of a manufacturer selling its heritage up the river in its entirety. The Compass is clearly a 4x4 vehicle and with Jeep's "Freedom-Drive I" 4x4 system, it's a far more capable proposition in the mud than many of its contemporaries. It's just that the Compass probably went a little further down the path to being a road car than the Jeep purists would have liked, especially in the US where it was available with (gasp!) front-wheel drive.

The die hard Jeep fans may not like the Compass very much but a fair proportion of these people buy their vehicles from army surplus scrap yards and drive around in combat fatigues smoking cigars while barking orders at pedestrians. That's while they're not re-enacting the Battle of the Bulge in a field just outside Guildford. Things have to move on. The Jeep Compass arrived in April 2007 meaning that it predates its Patriot sister vehicle by a good couple of months. The Patriot is a slightly more rugged-looking affair based on identical underpinnings, the same underpinnings that also gave rise to the even more road orientated Dodge Caliber. The basic mechanicals were sourced from Mitsubishi so they also crop up on the Mitsubishi Outlander and, as a result of a tie-in between the Japanese marque and PSA Peugeot Citroen, on the Peugeot 4007 and Citroen C-Crosser. The Compass hit the showrooms with a modest range of two engines and a single trim level which was aptly called Limited. At least there was a choice of manual or CVT automatic gearboxes. By 2007, the compact 4x4 boom was in full swing and the Compass was launched into a crowded marketplace where the oxygen of publicity was tough to come by. Things only got tougher over the next few months as more and more mainstream brands brought small 4x4 vehicles to market. At least the Compass had the heritage of the Jeep name to lend it some credibility in a sector where the commodity was often lacking. The axe fell on the Compass late in 2009.

What You Getword count: 340

Although the Compass shares its fundamentals with some other vehicles, it did undergo Jeep's own durability testing and the MacPherson strut front suspension and multi-link rear set-up apparently proved well up to the most demanding tests. Power is deployed using 'Freedom Drive I', a full-time active four-wheel drive system that can squirt up to 60 per cent of power to the rear wheels when needed but in most conditions is operating with virtually 100 per cent of available torque going to the front pair of wheels. The electronic stability control can be disabled if required by holding the dash-mounted button for four seconds. The Compass drives like a Jeep but does it look like one? From straight ahead it does, the characteristic grille and lights making it look like no other marque's product. Move round to the rear three-quarter view and things aren't so cut and dried, the tapered C-pillar looking pretty generic. Nevertheless it's a smart piece of styling albeit one that looks slightly under-wheeled. Bigger alloys would definitely give the Compass that bit of edginess that it needs and will doubtless be the first change many used buyers make, assuming a previous owner hasn't done the deed already. Owning a genuine Jeep rather than an obviously limp-wristed soft-roader from one of the wannabe 4x4 manufacturers will also be a big draw for many. What's quite remarkable about the Compass is how small it is when you get up close. Despite the beefy styling cues, it's not a lot bigger than a Ford Focus, sharing the same wheelbase as the Dodge Caliber but riding a little higher. The approach and departure angles (ie the car's ability to climb onto and descend off steep inclines) are also a good deal more aggressive than you might expect - in the time-honoured Jeep tradition. The interior is a little plasticky but seems very durable with a decent amount of rear leg room. A particularly nice touch is the compass point detailing on the bezels of the main dials in the instrument cluster. 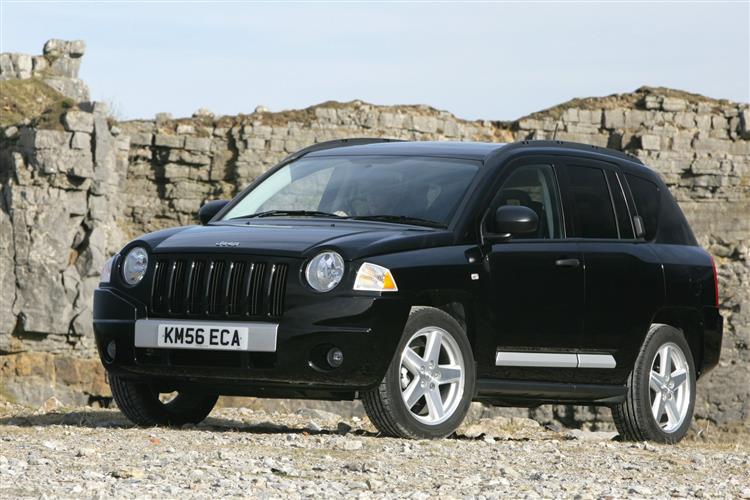