BUILDING THE LEGEND (some text hidden)

Honda didn't make life easy for themselves when they turned their fire on some of the biggest names in the prestige car market and pulled the trigger with the four-door Legend saloon. When launched, the near £40,000 price tag and hoped-for customer profile put the car up against well established and favoured names like the BMW 5-Series, the Lexus GS300, the Audi A6 and the Mercedes E-Class. In the eyes of some, Honda also tied one arm behind their back by only offering one engine, albeit a highly accomplished 3471cc 24-valve V6. The Japanese brand added to the car's armoury however with a vast array of technology making it as simple and easy to drive as possible. Headlines were a five speed sequential shift gearbox operated by steering wheel mounted paddles and a highly sophisticated SH-AWD (Super Handling All Wheel Drive) system. While it was a package that, brand new, suffered in the shadow of the German and Lexus marques, for used car buyers it all translates into an awful lot of car for the money, underwritten by Honda's exemplary record for reliability and build quality.

Despite their great success at producing and selling excellent smaller cars, Honda is not alone among the Japanese manufacturers in having struggled to make any significant impact in the higher-end luxury car market. Not that they haven't tried. In fact, the Legend executive saloon has been around for a while in various guises. The original version was launched in the mid 1980s as part of a joint project with Austin Rover that also gave birth to the Legend's sister car the Rover 800. Honda's thinking was that their partners Rover, with a history of luxury mid size cars like the P6 and SD1, could help them break into the UK and America with a bigger, upmarket model. It didn't really work, even though a coupe version was also offered. So Honda tried again in 1991 with MK2 saloon and Coupe Legend models, now with even smoother 3.2-litre V6s. They even carried an early form of sat-nav (admittedly only in Japan) called the Electro Gyrocator. These enjoyed moderate success, certainly more than the saloon-only MK3 model which arrived in 1996 and eventually petered out in 2004. Hence the low expectations which greeted the launch of this MK4 model in 2006.

What You Getword count: 360

The Legend is not the easiest car to spot in the supermarket car park. The styling is pleasant enough, the front end dominated by the H badge and the three horizontal bars of the grille, along with large headlights that look almost retro compared to some of the jewelled creations that adorn more recent vehicles. The flanks lack any creases or detailing and the rear end features large, effective, but again unremarkable light clusters. When new, the Legend probably didn't have the charisma or badge-appeal of similarly priced offerings from Jaguar, Audi or BMW. Second-hand, the story is entirely different and the value-for-money argument is a lot stronger when you can overlook bland styling for the attractions of superb build quality, advanced technology and affordable pricing. The Legend makes choosing easy as there's only one engine, the 3.5 litre V6, and only the one transmission set-up, the five speed sequential auto. Seek out the SH-AWD models and you'll also get the Collision Mitigation Braking System (which slows the car should it detect an accident about to happen) and Advanced Driver Assist (with adaptive cruise control which keeps a constant gap between you and the vehicle ahead). Inside, the cabin isn't as big as the outside dimensions suggest. Nor is the available boot space, which at 452-litres is smaller than its Accord sister. Build quality though, is of the highest and the equipment levels are downright indulgent with adaptive headlights, a reversing camera, adjustable heated front seats and a BOSE sound system as well as sat-nav and Bluetooth compatibility. Safety equipment includes front, side and curtain airbags, anti-lock brakes with Brake Assist and vehicle stability control. The Legend comes with a V6 3.5-litre petrol V6 with automatic transmission, all of which, along with the weight penalty of the 4WD system, means this is not a light car at around 1900kilos. As a result, expect fuel figures of around 24mpg (combined) and carbon dioxide emissions of 280g/km. It falls into the Group 17 or 18 insurance bracket and the three year/90,000 mile warranty offered when new gives some idea of Honda's confidence in the car to do big mileages without major worries. 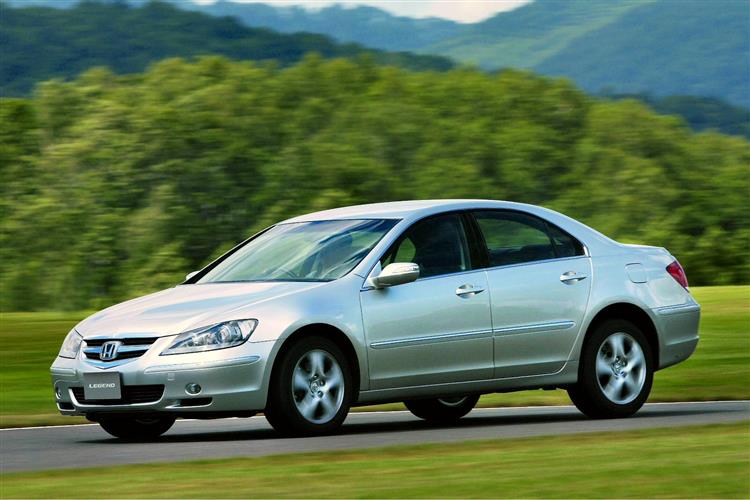