By the time Honda launched its third generation CR-V towards the latter stages of 2006, its task of remaining at the top of the compact 4x4 sales charts was looking massively more difficult. Not that Honda had taken its eye off the ball with the product: the CR-V was better than ever. The problem was that so many other manufacturers were now pulling out all the stops to cash in on the compact 4x4 boom. It wasn't long before virtually every single big name car brand had a small off-roader on its books. The CR-V had been one of a select breed: now it was going to have to fight it out amongst the masses. The CR-V had established a profitable position for itself in the marketplace since the first generation car arrived in 1997. If anything, Honda's offering was ahead of its time in that it made little pretence of being any good in the rough stuff. Instead, it concentrated on providing customers with a high level of ride and handling on the road plus a family-friendly interior design. The second generation model of 2002 barely deviated from this formula and neither did this Mk3 model. It's just that by 2006, the public were far better catered for with regard to small road-biased 4x4s. The CR-V had a fight on its hands.

The CR-V arrived in December 2006 with a pair of engines, one petrol and one diesel, and a trio of trim levels. Its key rivals were the Nissan X-Trail and Toyota RAV-4, two models that had been major players in the compact 4x4 market for a long time. Before too long, however, CR-V customers also had the likes of Citroen's C-Crosser, Peugeot's 4007, Mitsubishi's Outlander, Vauxhall's Antara, Chevrolet's Captiva, Renault Koleos, Volkswagen's Tiguan and the Ford Kuga to consider. Choice for the compact 4x4 customer had reached a zenith.

What You Getword count: 378

If standing out in amongst a crowd of similar compact 4x4 models was the CR-V's toughest task, it got off to a good start on the styling front. The coupe-like window-line isn't what you expect to see on a compact 4x4 and the way it parts company with the roof-line towards the rear of the car is certainly novel. The stance is low slung and hunched while the front end is very distinctive, with an unusual 'smiling' grille section that fits flush to the projector-style headlamps. A choice between 17 and 18-inch alloy wheels also underscored the Honda's on-road mission. Other 4x4 cues were also ditched, one by one. The tail-mounted spare wheel was excised, replaced by one that sits under the load compartment floor. The tailgate also opened like a conventional hatchback - side openings obviously having been deemed a little passe. The internal dimensions aren't far removed from the Mk2 CR-V, a car which always was one of the more spacious compact 4x4s. Load space was increased, despite the internally housed spare, while access was improved by bigger doors that open wider. The interior features metallic elements on the dash with soft textured black trim, while the front seats cater for this nation's ever-expanding posteriors, being larger and more comfortable than on the previous model. The CR-V features a gear lever at the base of the centre stack, brought closer to the steering wheel, creating more floor space. Equipment levels are generous with an eight-way powered driver's seat, leather upholstery, front and rear parking sensors and a rear-view camera offered according to trim level. The rear seats split 60:40 at the base and 40:20:40 at the back and slide back and forth to maximise either leg or luggage room. They even recline to really let rear passengers flake out on longer trips. When not required, the rear seats can be tumbled forwards and stowed upright to create a space big enough for a pair of mountain bikes. You won't even need to remove the front wheels. Extra versatility is served up with the 'Double Deck' luggage storage system created by a shelf that sits just over a foot off the load floor. This hinged slab allows luggage below to remain easily accessible but out of view. 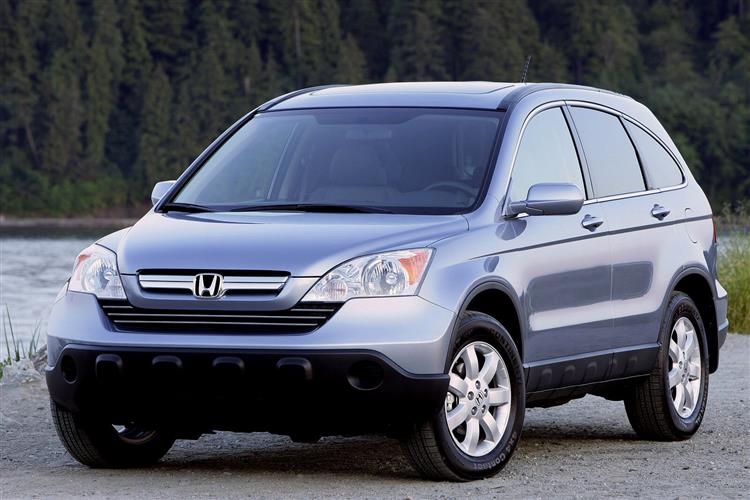