Although it has taken some time for the Suzuki Grand Vitara to divest itself of the wide-wheel and bodykit image Vitaras were saddled with in the early nineties, it's now a far more mature proposition. In fact, most would hardly believe it was spawned from the same bloodline. Whereas most budget compact 4x4s do nothing particularly well, the Grand Vitara is a true dual purpose tool, mixing a modicum of off-road ability with reasonable blacktop manners. Used examples are still very underrated.

The post '98 generation Grand Vitara was an okay junior 4x4 but was never going to set the world alight. It was starting to feel very old by the mid Noughties and should have ideally been replaced a couple of years earlier. Still, better that Suzuki got its successor right than rush something to market that was half baked and the 2005 model year Grand Vitara was a revelation. More mature, better built and far bigger than its predecessor, it was a massive step forward. Available in both three and five door guise, the only fly in the ointment was a rather mix and match approach to body styles and engines and it wasn't until March 2007 that Suzuki teamed the 1.9 DDiS diesel engine with the chunky three-door body. Sales have been strong, many buyers realising that here is a vehicle with capabilities beyond the compact 4x4 norm.

What You Getword count: 291

Don't let the more sophisticated angular styling fool you. Beneath the sheet metal there's a proper ladder framed chassis that will eclipse rivals such as the Hyundai Tucson or Toyota RAV4 when the going gets tough. In that regard, you're getting the best of both worlds - a vehicle that doesn't look like something that's just picked up a stray ewe but which can still cut the mustard during the occasional 'off piste' foray. The neat, minimal front end styling is very appealing, while the sculpted wheelarches and clever use of curves and angles in the car's glasshouse gives it a very contemporary look. Longer, taller and wider than its predecessor, it improves on its packaging still further, offering decent space for taller rear seat passengers. Suzuki claimed at this car's launch that there were no plans to replace the seven-seat variants of the post '98 generation Vitara but both three and five-door five-seater models were offered from the beginning. A side-hinged tailgate features a separately opening rear window section so you'll be able to sling a couple of bags in if space is tight in the multi-storey. The interior was given a radical rethink in this generation model. Gone were the acres of black or grey plastics as seen in the post '98 Grand Vitara and in their place came a far more stylish duotone finish to the dashboard. The three-spoke steering wheel is an attractive design and could be configured with wheel-mounted controls for the stereo. The centre console features clean design and effective ergonomics while the instrument binnacle contains the speedometer in the middle ringed by a metallic finish. The rev counter sits on one side and the minor dials on the other, creating an interesting three-dimensional effect. 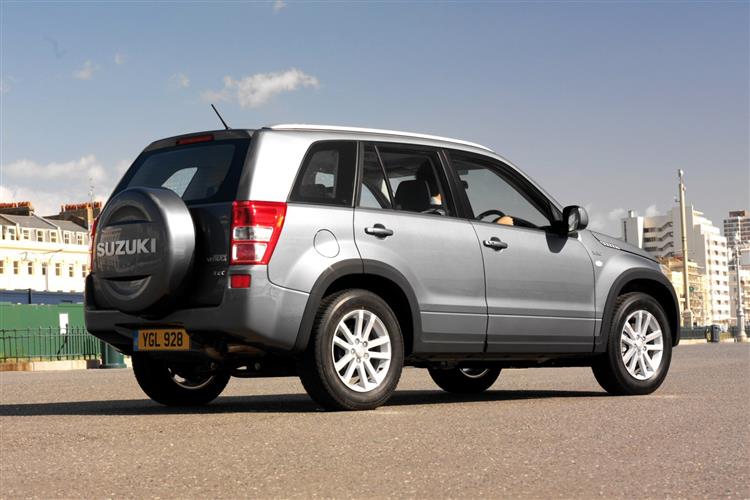