There's a lot to be said for the Kia Sportage. In offering the cheapest compact 4x4, Kia would appear to have cornered the market amongst budget buyers and the Sportage is a very decent car. Unfortunately, this is a market that's notoriously badge conscious and, as Kia discovered, many customers would much rather drive a three year old Freelander than a brand spanking new Sportage. That's as maybe but if you're not too worried about your golf club kudos points, a used Sportage makes a very canny buy.

We were given a quick sneak preview of what to expect from the Kia Sportage when sister company Hyundai brought their version of the vehicle, the Tucson, to market a few months earlier. While being the cheapest is often advantageous, there aren't often too many prizes for being second cheapest and the Tucson has struggled. The Sportage has fared a little better, and if you shop around you should be able to find the car in the specification and colour of your choice. What hasn't helped the Sportage is the fact that its predecessor was so underwhelming. Perhaps Kia should have completely rebranded what is a very capable little car. The initial range offered buyers a choice between either 2.0-litre petrol or diesel powerplants, plus a 2.7-litre petrol V6. In early 2006, the diesel was upgraded to Euro IV-compliant status and power was upped to 138bhp. 2WD versions of the Sportage were introduced for the 2008 model year at the same time as a facelift brought a mild re-style to the front end, firmer suspension and sharper steering.

What You Getword count: 480

The underpinnings of the Sportage are the same as those of Hyundai's Tucson 4x4, so with two companies to share the development costs, you'd expect a fairly decent result: so it's proved. Kia's credibility when it comes to building 4x4s was boosted enormously with the addition of the excellent Sorento and the Sportage has augmented this reputation. It's a vehicle with a very different focus to its predecessor. That car was rather undervalued in this country but sold well in many other markets on account of its rugged off-road capability. The 'Fulham Farmer' focus of 4x4s in this country ensured that the old Sportage was seen as a bit of a rough and ready Far Eastern curio that didn't have the sophistication and ride quality to cut it in a rapidly expanding market. The MK2 Sportage set out to be a lot more user-friendly, adopting a few MPV-style practicality features. The rear seat cushion and the backrest are a case in point, adopting Kia's 'Fold and Dive' system. Whilst it may sound like a tactic taught by Argentinean football coaches, it is in fact a method of creating a spacious, square-sided and completely flat cargo area. The front passenger seat backrest can be folded flat to house extra long loads and at the back there's even a flip-up rear window which means that items can be dropped into the luggage area without having to open the tailgate. Not that opening the tailgate is overly difficult. Unlike many compact 4x4s, the Sportage is big enough to keep the spare wheel in its proper place - under the luggage bay floor - instead of mounting it on the rear tailgate. This means that the tailgate is pleasantly light to open and doesn't whistle at motorway speeds - a problem that afflicts cars with hatch mounted spares. The cabin is styled in a broadly inoffensive manner with far more attention paid to ergonomics than its rather haphazardly styled predecessor. If only Kia could have prevented themselves adding icky plastic wood to the dashboards. The MK2 Sportage's interior waves goodbye to the acres of featureless elephant-grey plastics and instead offers a neat cluster of instruments on the centre console, mounted high so that you don't need to go fishing about at shin level to adjust the air conditioning. On the other side of the steering wheel assembly are the switches for the four-wheel drive system and the ESP stability control while the fascia itself features a metallic bezel around the main instruments. The exterior styling is neat without offering too much in the way of signature detail. The chunky wheelarches give the car a rather over-inflated look but the overall effect is not unpleasant. It just blends into the background a little. The only change we'd suggest would be the fitment of wider wheels to fill out those chunky arches a little more convincingly. 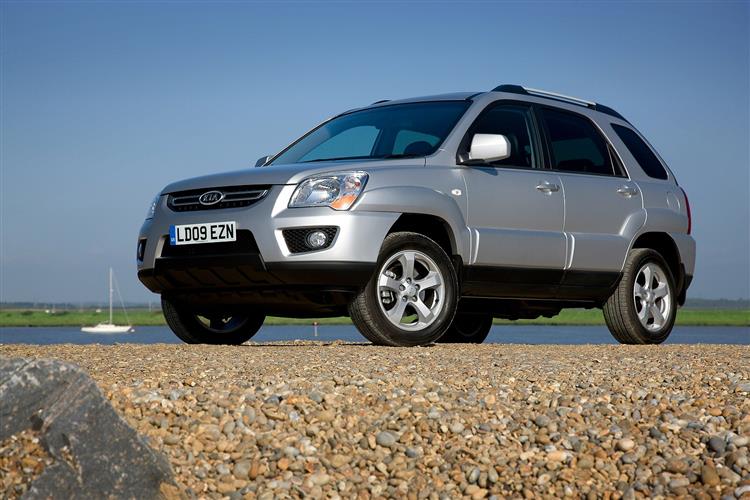