Unmistakably German: that, believe it or not, was the advertising strap line devised for the big promotional push of the 2008 Citroen C5. In the TV ad a blonde businessman drives the car through a German landscape backed by a Wagner soundtrack. Boris pauses only to eat some Bratwurst in a bier keller before parking up at Berlin's Brandenburg gate. The Citroen C5, a heavily accented voiceover tells us, is "unmistakably German - made in France". The intention was to underline the supposed Germanic quality of the C5, positioning it as an alternative to the increasingly popular saloons from BMW and Audi. The effect was to undermine a century of Citroen heritage, diverting attention from the reasons that people might actually buy a C5. The car is big, comfortable, well equipped and not German. It's also distinctly affordable on the used market.

There was a time when car buyers with families trooped down to dealerships in their droves and bought medium range family cars. Sales levels for this category of vehicle were then swelled further by company car user choosers and fleet managers who selected this kind of vehicle with blinkered diligence. Times were good for big four-door cars with mainstream badges but it wasn't to last. The choice available to family buyers exploded with the advent of compact 4x4s, MPVs and the growing fondness for German compact executive models amongst the fleet fraternity. Earlier Citroen C5s had been around for the boom times but the 2008 model, despite being a vast improvement on those, was going to have to work far harder for every unit sold. The C5 launched early in 2008, arriving with 1.8 and 2.0-litre petrol engines plus a wider line-up of HDi diesels of 1.6, 2.0, 2.2 and 2.7-litre capacities. Trim levels were SX, VTR+ and Exclusive. The handsome Tourer estate model came a few months later and the 2.7-litre V6 diesel was replaced with a 3.0-litre diesel unit a while after that. The diesel engines sold far more strongly than the petrols and were upgraded at various intervals to improve the economy and emissions which were so important to the fleet and business customers that the C5 relied upon.

What You Getword count: 348

The C5 definitely has a more classically handsome look about it than its bulky predecessor. It follows the broad conventions of the medium range car market but uses some expertly conceived detailing to mark out its own personality. In Tourer estate form, it's even more of a stunner but the saloon bodystyle still has the capacity to draw admiring glances. The large Citroen double chevron badge that extends right across the nose suggests a car proud of its parentage, while the heavily contoured flanks draw the eye along to the neat rear end with its small boot lid spoiler. In the cabin, claims to Germanic standards of fit, finish and materials quality do fall a little flat but if by German, you mean BMW, Audi and Mercedes, that's hardly surprising. Cars from these marques that match the Citroen C5 in size operate in the compact executive sector and are substantially more expensive: The fact is that the C5 is competitive with its family car contemporaries if you're evaluating the way the cabin looks and feels. There are too many small buttons clustered together on the steering wheel and the centre console to make the control interfaces easy to grasp but the lines are clean and that hint of quirky Citroen design is in evidence. Would a German manufacturer fit a fixed-hub steering wheel? Of course it wouldn't and Citroen's one works very well. The centre section of the wheel remains stationary so it's easier to locate all those buttons and, importantly, so there's a stable platform for the driver's airbag to deploy from. The big comfy seats in the C5 don't feel very German either. They might lack a little support if you're going to fling the C5 round a corner but they're a superb place to sit out a motorway marathon. Space for rear seat passengers is helped by the flat floor. Go for the Tourer estate and the 439 litres of boot space offered by the saloon rises to 505 litres with all the seats in place and nearly 1500 litres with the seats flat folded. 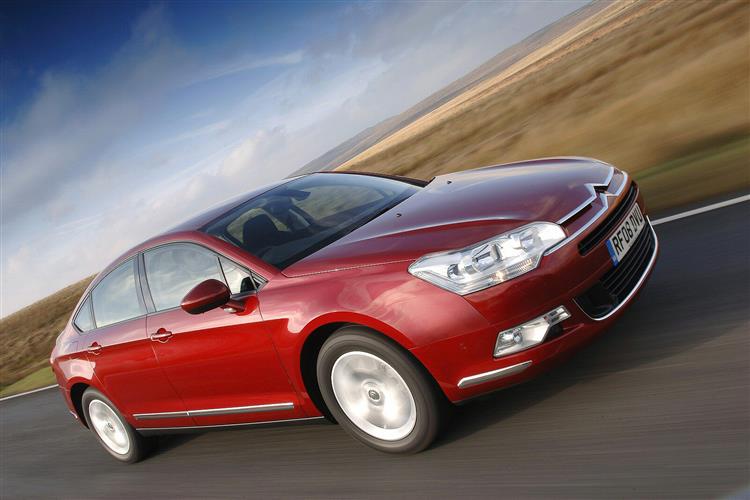