We're constantly being encouraged to tighten our belts, cut our cloth according to our means and erase extraneous items from our budgets. But how far would you go to save a few quid on a car? Some practise the art of 'bangernomics' which involves buying a car for under £1,000, running it until it becomes uneconomical, scrapping it and sourcing another. While this can make financial sense, you're usually driving about in a car with poor safety provision and third-rate electronics. There has to be a smarter way and in the unassuming shape of Kia's Magentis, an answer might have sneaked in from left field.

The Kia Magentis? That big one only a few minicab drivers bought? Spot on. A stranger to the sales charts, despite being well equipped and priced aggressively, it neither tickled the fancy of fleet managers nor snared the affection of private buyers presumably put off by its hefty depreciation. I still haven't worked out who was buying the Kia from new, so if you find out, do let me know. It's been around in the UK for longer than you might think, the first cars being sold, or rather offered for sale, in 2001, with an all-new model arriving in 2006. The car we deal with here is the facelifted version of that second generation car, launched in 2009. Rather sagely, Kia decided to ditch the petrol versions and focused its attention on the 2.0-litre diesel, offered in just one trim level, the TR, with a choice of manual or automatic gearboxes.

What You Getword count: 192

The goggle-eyed front end that adorned the 2006 Magentis was consigned to the history books by a far slicker piece of penmanship. There are hints of Honda Accord about the way the headlights and grille merge into a visor across the front of the car and there's no doubt that it's a big improvement. Similar attempts were made to raise the game of the Magentis interior but they've been less successful. The hard plastics and forgettable design remain but at least the fixtures and fittings seem sturdily assembled. The Magentis is a decent size, measuring 4,800mm from nose to tail and 1,805mm from side to side. This bulk has been well translated into interior space and there's plenty of room for a pair of adults in the rear with a 425-litre luggage space behind. Of course, the car is very well equipped. There's only one trim level, so all versions have climate control, an MP3-compatible radio/CD player, electric windows, electric mirrors, remote central locking, leather seats, alloy wheels, parking sensors, driver's seat height adjustment and a tilt-adjust steering column. Safety isn't neglected, either, with ABS brakes, twin front airbags and side airbags. 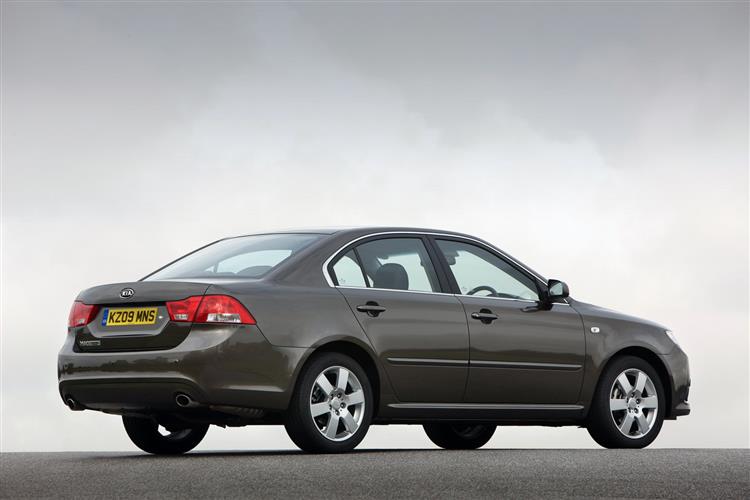