AV IT (some text hidden)

I'm not sure whether I've yet fully embraced the environmental benefits of recycling. I once watched the collections of my carefully sorted glass, paper and plastics all being tipped into the same bin truck and figured that perhaps my local authority wasn't quite up to speed with it. One company that most certainly is on the money when it comes to recycling is Chevrolet. Rather than bin the old Chevy Kalos model, it facelifted and retrimmed it and in 2008 launched it as the Aveo. As with any recycled product you'll need to accept a few rough edges but you'll get a rosy glow of contentment in the process. Here's how to save even bigger by bagging a used bargain.

The Chevrolet Kalos? The one that was previously the Daewoo Kalos? Yes, that one. If this was a German car you'd be paying more for a distinguished bloodline, so don't get too superior about the fact that the design has been around a while. The Aveo campaigns at the budget end of the supermini range and by buying used you're getting a big slice knocked off an already inexpensive car so it seems churlish to grumble that some of the interior fittings aren't exactly state of the art. Launched in UK dealers in 2008, the Aveo had already been on sale for some time in Eastern Europe where it is an absolutely huge seller. That this unassuming little hatch was the most profitable vehicle in the whole of Chevrolet Europe's product portfolio will have escaped many but at a time when General Motors will take whatever's going, the Aveo was a beacon of light in the darkness. The Aveo's successor was shown at the 2010 Paris Motor Show. Retaining the name, it's bigger, sportier in appeal and features a more efficient array of engines.

As makeovers go, the Aveo is one of the cleverest we've seen. In profile it doesn't look too much different to the Kalos, the five-door car's rather odd drooping swage line being instantly familiar. Move round to the front and the impression is utterly different. The Kalos' rather unhappy looking face has been replaced with something a whole lot bolder. The upswept headlamps and enormous double grille are punctuated by a serious Chevy cross logo. It's got about twice as much attitude as any other small car you could care to mention. The three-door model is even smarter, with the flanks being sculpted to incorporate pronounced flared rear wheel arches. At the back, there's one of the neatest rear lights clusters around. The interior lacks the self-assurance of the exterior and, rather inevitably in this corner of the market, feels somewhat built down to a price. The same can be said of the Aveo's key rivals though and Chevrolet has specified and trimmed the interior wisely, giving it a sensible equipment count, fairly decent materials and as much space and versatility as the design constraints allow. It's not the biggest car in its sector, but the compact torsion beam rear suspension means that there's plenty of useful room in the back. With two engines and three and five door body styles to choose from, Aveo customers also benefit from a decent level of standard kit. "Plenty of car and equipment for a fair price" is part of Chevrolet's corporate philosophy and the entry-level Aveo adheres to that maxim with driver and passenger airbags, an MP3-compatible CD stereo and wipers with intermittent facility. Plusher trim levels add tinted glass and electric front windows. Options include 15-inch aluminium wheels, leather trim for the steering wheel and gear knob, an onboard computer, steering wheel-mounted audio controls and automatic climate control. The Aveo's biggest markets to date have been Spain and the Ukraine, followed by Russia. Italy is in fourth place, followed by Germany. More than 90 per cent of these sales go to the five-door car and statistics show that in Western Europe, the Aveo is usually a second car whereas in Central and Eastern Europe it's usually the family's sole vehicle. 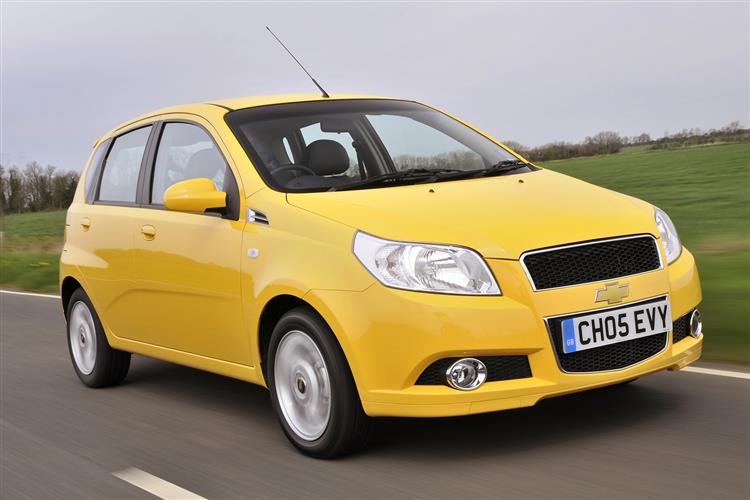