FIVE OF HEARTS (some text hidden)

Manufacturing a product that amounts to more than the sum of its parts isn't easy but if you can pull it off, it's like being handed a golden egg laying goose that can forge licences to print money with its beak. The trick is to harness the strange, unpredictable forces of fashion to render the item in question cool, desirable and trendy, at which point you can pretty much charge what you like for it. Fiat had looked on while BMW delivered a master-class in this process with its new MINI. Figuring that it would like a piece of the action, the Italian firm set about remaking the Cinquecento for the twenty first century.

The second generation Fiat Panda was widely regarded as a first rate citycar but it wasn't particularly cool and was barely registering on the style radars of youthful trendsetters in the UK's urban centres. Then Fiat took the Panda platform and used it as the basis for a modern version of the classic 500 or Cinquecento of the late 50s. With its retro design, lively colours and cute shape, it had obvious similarities to the hugely successful BMW MINI and quickly had motorists taking notice. The original 500 debuted in 1957 but Fiat was still producing versions of it in 1975. Today, these original models look almost comically small but they were hugely successful as practical and affordable transport, ultimately becoming something of a design and evolving into numerous different versions. The modern 500 closely adheres to the original car's design themes but on a considerably larger scale. It arrived at the start of 2008 with a choice of petrol and diesel engines but equally important was the wide range of trim levels and accessories that customers could use to personalise their vehicles. This was a trick employed with great success by the MINI and it made for a large degree in variation between 500 models seen on the road. In the early stages of 2009, the high performance Abarth model was introduced powered by a 1.4-litre turbocharged engine with 135bhp. Around the same time, Fiat also introduced a Start&Stop model based on the 1.2-litre petrol car which cuts its engine when stationary to save fuel. The 500C convertible arrived a little later in 2009.

What You Getword count: 307

The car is packed with delicious design details. There's a very well-judged blend of retro chic and ruthlessly modern contemporary design inside, with circular head restraints and iconic 500 badging on the Panda-sourced dashboard. The exterior treatment is cool and clean with only the front grille and door handles differing significantly from the Trepiuno show car. Hats off to Fiat in this regard. So often we see cars that look fantastic as prototypes on a show stand only to arrive in production form virtually unrecognisable. The 500 is significant in more than the obvious ways. Built at the Tychy plant in Poland alongside the Panda, the chassis also formed the basis for the Ford Ka. At 1.65m wide, 1.49m high and 3.55m long, the 500 doesn't take up a great deal of space. For reference, a MINI is 1.91m wide, 1.40m high and 3.68m long: in other words much wider, a little lower and a fair bit longer. Even Renault's second generation Twingo, at 3.60m, won't fit into some parking spaces the 500 will be able to squeeze into. The flipside of this is rear seat space that's rather limited but the boot is more useful than that of a MINI with 185 litres to play with. Like the Panda, the 500 uses simple MacPherson strut suspension up front and a basic torsion beam at the back. A few centimetres were added to the width of the car's track, giving it a foursquare appearance and Fiat claims that body rigidity is around 10 per cent better than the Panda. Entry-level Pop models feel quite basic and lack air-conditioning so it's far better to seek out a Lounge derivative. The huge range of styling options means that used buyers will be confronted with a wide variety of different specifications and many of the cars will feature exterior graphics. 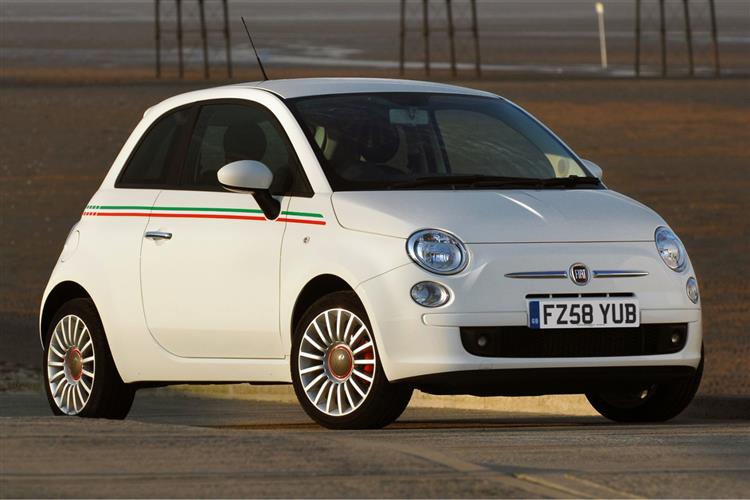