WONDERS OF THE MULTISPACE (some text hidden)

It's something of a French tradition to transport the family around in a vehicle of commercial origins, and while the Citroen Nemo shifts big numbers as a light panel van, its people carrying version, the Nemo Multispace, takes an old theme and gives it a modern twist. It's an inherently good idea. Van-based MPVs are built tough so kids can't do too much damage, there's acres of space inside yet they're easy to see out of and park. Here's what to look for when shopping for a used one.

The Nemo van was developed to sit below the big selling Berlingo van in Citroen's light commercial vehicle range. The first generation Berlingo just happens to be the vehicle that did most to popularise the van based MPV concept in the UK market with its Berlingo Multispace derivative. Since then, Citroen has never really looked back, bringing us low cost people carrying versions of its second generation Berlingo and the larger Dispatch van. It always looked likely that the diminutive Nemo would get the same treatment. Launched in 2009 with either a 75bhp 1.4-litre petrol engine or a 70bhp 1.4-litre diesel, the Nemo Multispace lasted a year before it received major underbonnet surgery. In September 2010 the 1.4-litre units were replaced by a far more efficient 1.3-litre diesel good for 75bhp. Where the 1.4-litre car was available with a Sensodrive automatic gearbox as an option, the 1.3-litre successor gets a choice of manual or sequential EGS transmissions.

What You Getword count: 224

If you thought a van-based people carrier would be a utilitarian thing in look and feel, the Nemo Multispace should exceed your expectations. The chunky exterior styling has more than a hint of 4x4 about it with those large protruding bumpers and flared wheelarches. The bumpers and the side rubbing strips also serve as useful protection for the kind of parking knocks that vans and MPVs have a habit of picking up. The front and rear light clusters are also mounted high up out of harm's way and the Nemo Multispace benefits from the Nemo van's convenient access points. A larger tailgate opens up the whole rear of the vehicle revealing a 360-litre boot with a very low loading lip, and that's below the parcel shelf. Stack your goods to the ceiling and there's lots more capacity but the Nemo really shows its commercial vehicle origins when you fold the rear seats and there's 890 litres to play with. The back seats can be lifted out too, returning the vehicle to something approaching its original cargo-carrying state but most of the time, buyers will have that rear bench occupied by passengers. Access to it is through the twin sliding side doors and although the aperture isn't particularly wide, the sliding design does stop your offspring re-sculpting the bodywork of adjacent cars when they exit. 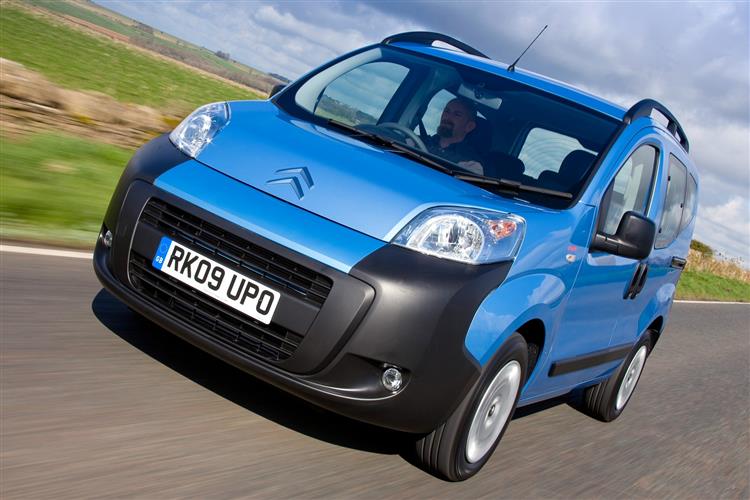