Citycars don't have to be cheap and cheerful. Some manufacturers make them trendy. Others concentrate on a higher quality look and feel. Both approaches take asking prices of these diminutive sub-superminis dangerously close to what you'd pay for a properly-sized supermini from the next class up. Still, buyers don't seem to mind and cars like this one, Suzuki's Splash, have proved quite popular in the small car sector over the last few years. Though it comes from the higher-quality rather trendy standpoint in its approach, it still struck a chord with plenty of new car buyers, if not quite as many as its design stablemate, Vauxhall's Agila. So what's this Suzuki like as a used buy?

The Splash arrived in March 2008 to sit between the Alto citycar and the Swift supermini in the Suzuki model hierarchy. It's smaller than supermini-based MPVs of the period like Vauxhall's Meriva and Nissan Note. In terms of size, it has more in common with the likes of Peugeot's 1007 or the roomier citycars like Fiat's Panda but the most obvious comparison is with the MK2 Vauxhall Agila with which the Splash shared a platform. The car definitely has MPV tendencies with its tall shape but it's best thought of as a citycar for owners who need to carry passengers on a regular basis. The Splash initially offered a pair of engine options. There was a 1.2-litre petrol unit and a 1.3-litre diesel obtained by virtue of the link-up with Vauxhall. The 1.2-litre engine was available with an automatic gearbox and although GLS and GLS+ trim levels were offered, the diesel was badged DDiS and came with its own specification. The engine line-up was extended early in 2009 by the addition of an entry-level 1.0-litre petrol unit. This had the desirable effect of lowering the entry-level price of a car which had looked pricey next to basic versions of full-size superminis.

What You Getword count: 372

A diminutive five-door car, the Splash was the fourth model to be created under Suzuki's "Way of Life!" design philosophy. Following on from the Swift, Grand Vitara and SX4, the aim was for it to excite customers with a youthful vibrancy that previous small Suzukis had sorely lacked. The car also needed to retain the spaciousness, high seating position and good all-round visibility that a supermini-MPV needs and that the Splash's Wagon R predecessor actually did rather well. The Splash has a 30mm shorter wheelbase than the Swift supermini and is just 3.72m long overall. Despite this, space inside is quite generous with the mass of headroom adding to the roomy feel. The boot is very pokey but when the rear seats are unoccupied, you can fold them down to make room for the shopping. The exterior styling owes much to the Project Splash concept car that had the covers whipped from it at the 2006 Paris Motor Show. Certainly, this finished production Splash is a pleasantly styled thing. Chunky and high-roofed in the best MPV traditions, it's also significantly different in appearance to its Vauxhall Agila sister vehicle. Compared to the Vauxhall car, the Splash exhibits a different bonnet, wings, bumpers and light clusters as well as a different tailgate. The switchgear inside is similar to that in the Swift with big, simple controls that are extremely easy to use. The build quality seems to be robust even if some of the plastics are a little low rent. The rev-counter sits in a little pod on top of the dash, looking like an afterthought: certainly, it can be difficult to glean the required information from the thing. All Splash models are equipped with a CD tuner with MP3 player and steering wheel-mounted audio controls, a leather-trimmed steering wheel, remote central locking, front electric windows with driver's auto-down, air conditioning, electrically adjustable and heated door mirrors, height-adjustable front seats, a tilt adjustable steering wheel and an information display. ABS with brake assist and electronic brakeforce distribution is included, as is ESP stability control. Six airbags are dotted around the interior, plus there are seatbelt force limiters and pre-tensioners for the front seats. That's a good quota of equipment for a small car. 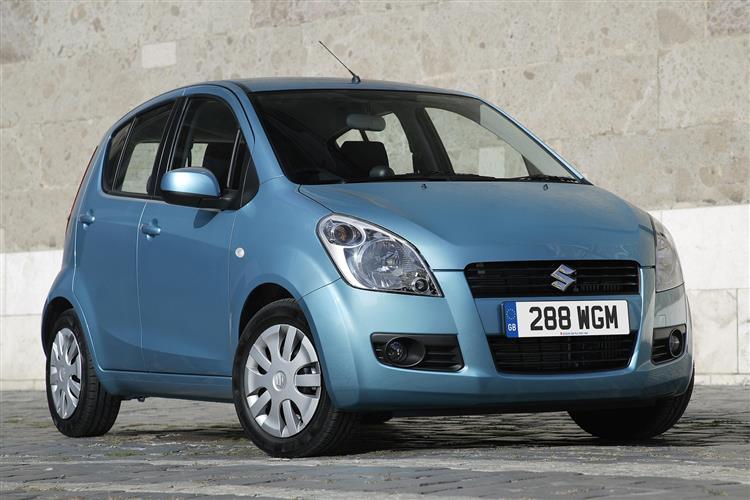