BETTER BY DESIGN (some text hidden)

Toyota's Yaris used to have things very easy. It was the default small Toyota. Then the company squeezed it from below with the Aygo and from above with the increasingly accomplished Auris. Suddenly the Yaris wasn't such an obvious choice. It's still a great used buy, offering excellent reliability and modest running costs. Choose one of these post 2009 cars and you also get the much improved 1.33-litre petrol engine which endows the Yaris with a reasonable turn of pace. Here's what to look for when shopping for a used Yaris.

Peering into the world of the car designer reveals some fascinating insights. Take the Toyota Yaris, for example. The second generation car was introduced in December 2005. A couple of years after this car was launched, work would begin on the third generation car which made landfall in late 2011. While this was going on, a separate team of Toyota designers was tasked with planning and designing a refreshed version of the second generation car, call it Mk 2.5 if you will, to arrive in dealerships in 2009 which was tasked with giving a vital kick to sales in that platform's autumn years. This is the car we look at here and, to be honest, if you track down a decent used example, it'll still feel tight and fresh and anything but an exercise in dollying up an ageing idea, the facelift bringing a neater integration of the bonnet and bumper. The T3 trim level was dropped giving buyers the choice of T2, TR, SR or T Spirit. The major news was the arrival of the 1.33-litre engine with Stop & Start technology and the wider Yaris range also took a more committed approach to lowering economy and emissions with a series of weight saving, efficiency and aerodynamic tweaks made under Toyota's Optimal Drive banner. The SR level was dropped a few months later. In fact, so good were the powertrains fitted to this 'Mk 2.5' car that they were carried over into the all-new third generation vehicle in 2011.

What You Getword count: 313

Aesthetically, the look of this version hasn't changed much in its time on the market, though a few detail improvements have been made. Smarter rear light clusters on the outside. And a return inside to conventional instrument dials after the digital clusters was deemed a little 'Buck Rogers' for conservative Yaris customers. The MPV-like forward placing of the windscreen makes the driving position seem a little more commanding than it is on some small cars (though it's a pity the steering wheel doesn't adjust for reach as well as height) and all-round visibility is very good. The cabin itself has plenty of stowage space -18-litres in all - and, though unremarkable in terms both of style and plastics quality, is screwed together beautifully. The double-sealed doors, for example, feel thick and weighty and shut with a thunk rather than a clang. You can see why this car continues to do so well in customer satisfaction surveys. In the back, there's comfortable room for two adults but, as usual in this class of car, three would be a bit of a squash. At least headroom is less of an issue in this generation of Yaris thanks to an increase of 30mm in height over its predecessor. Really tall passengers can even recline the backrest by up to 10 degrees, a feature that aids comfort on longer journeys - or simply helps to send the kids to sleep. The seat is split 60:40 and you can slide both sections of it independently backwards and forwards by up to 150mm to prioritise either legroom or luggage space. Luggage-wise, there's 257-litres of luggage room with all the seats in place -and extra space under the boot floor. If you need more, fold the EasyFlat rear seats down and you're treated to one of the larger stowage areas of any supermini - 696-litres - and it's perfectly flat. 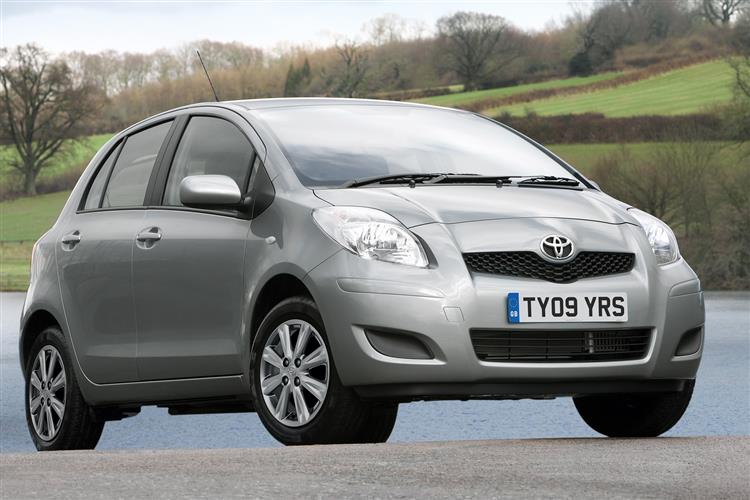