Although Fiat's Doblo wasn't the first van-based MPV to hit the shores it has developed into one of the best. Functional rather than flashy, the Doblo answers the need for those motorists who want space and a lot of it. Although sales to date have been unspectacular, the right used Doblo offers a lot of car for the money.

Launched in the UK in June 2001, the Doblo was some way behind the likes of the Citroen Berlingo Multispace and the Renault Kangoo. Nevertheless it offered a pair of robust engines and styling that was a little more adventurous. Although the 65bhp 1.2-litre petrol and 63bhp 1.9 diesel engines were an honest, if unspectacular pair of performers, it wasn't until the arrival of the 1.9-litre JTD engined Doblo in late 2001 that the Fiat really competed fair and square with the Renault and the Peugeot. In a growing market sector Fiat had somewhat hobbled the Doblo from birth and the message that this was a vehicle well worth consideration subsequently became lost. This, more than any other, is the reason the pool of available used examples is so small. In spring 2004 the Doblo received an interior facelift, the main addition being a new two-tone dash. At the same time, the 1.9D engine bit the dust and a 1.3-litre Multijet unit arrived. The 1.2-litre petrol soldiered on and the 1.9JTD remained at the top of the range. A new Doblo arrived in 2010 with smarter styling and more efficient engines.

What You Getword count: 497

To get a perspective of where the Doblo fits into the marketplace, it's probably best to consider its rivals. These include the Renault Kangoo and Citroen Berlingo Multispace. Whilst these are by no means common sights on UK roads, sales in this class have rocketed by nearly 300% over the last four years. In many ways, this is good business for Fiat. Built using low-cost labour in Turkey, the Doblo is the last Fiat to utilise a conventional steel chassis rather than the more advanced 'spaceframe' system used for the Multipla. As such, it represents rugged and, above all, cheap engineering that keeps the basic costs down. Two variants of the Doblo design are available: the Doblo car, as we have here, and also the Doblo Cargo, a commercial van with no fewer than 154 different body permutations. To further emphasise the Doblo's status as a 'world car', a factory in Brazil will start producing Doblos to cater for the huge South and Central American markets. If you are trying to build a reliable, bulletproof mode of transportation, you need low maintenance, dependable workhorse engines. This is both the Doblo's greatest asset in emerging markets and its Achilles heel in the eyes of more sophisticated Western European consumers, accustomed as they are to more refined fare. What will be of more relevance to prospective purchasers is the cavernous load bay. That rudimentary rear suspension comes into its own here, as it allows for a near perfectly flat floor, and the almost vertical sides of the Doblo help to create a 750 litre load space with the seats in place and a gargantuan 3000 litres with the seats folded. Fiat claim the Doblo can carry five mountain bikes and their riders, but without recourse to a junkyard compactor, this seems difficult in practice. Fiat's Multipla paved the way for wacky MPV styling, and won a crop of awards, but how many do you see on the roads. It seems that UK buyers preferred the more conservative lines of the Vauxhall Zafira, and it's entirely possible that the same will happen to the Doblo. The strange amalgamation of curves and that monstrous front grille are both striking and challenging, although lacking the cutesy appeal of the Renault Kangoo. The interior styling is more conservative, with high-mounted seats giving a commanding driving position, whilst never fully concealing the Doblo's van-based origins. It certainly represents a cost effective and modern way to haul the family about in something less than limousine levels of comfort. Nevertheless, the Doblo includes some thoughtful touches such as front and side airbags, pop-up roof rails and a swivel-opening roof hatch, two big sliding side doors and a cargo shelf above the windscreen. The seats are trimmed in a suitably hardwearing fabric for transporting young families about and all surfaces are made of sturdy materials which are intensely practical. As well as the high level shelf, numerous cubbies dot the interior, including some genuinely vast door bins. 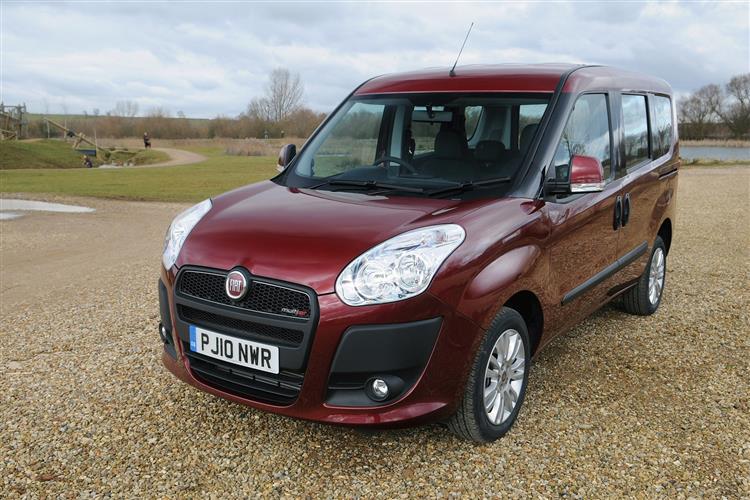