There's a rule of thumb that states that if you want a great Fiat, buy the smallest one possible. The bigger Fiats get, the less class competitive they seem to be. So when Fiat launches a supermini class car, it's fair to say that expectations are high. Fiat's Punto Evo was a supermini that didn't always play by the established rules. It was bigger than most cars in this class but was priced aggressively and looked a good deal classier than most boring shopping hatches. There are some cars that make great new buys but poor used selections and there are also vehicles that are quite the opposite. Choose carefully and a used Punto Evo can make a lot if sense. Here's what to look for.

When it comes to writing the history of Fiat, the Punto Evo probably won't even get a mention. Not because it isn't a good car, but merely because Fiat's naming policy has a lot to answer for. When this third generation Punto first appeared in 2006, it wore the Grande Punto badge, which had an agreeably Ronseal touch to it insofar as it did exactly what it said on the tin. It was a Punto and it was Grande. Fiat developed this model into the Punto Evo, launched in 2010. This was first unveiled at the 2009 Frankfurt Show and it was clear that the Italians had been listening to customer feedback. Buyers loved the Grande Punto's sleek styling and practicality but weren't so keen on some of its interior plastics, its ageing engine range and felt that in-car technology was falling behind. The Punto Evo addressed these issues but was initially sold alongside run-out models of the Grande Punto, confusing the customer proposition, in the UK at least. Then there was the fact that the 'Evo' badge here has connotations of extreme high performance, something the little Fiat never delivered, even in the warmer Abarth version that subsequently appeared. Biggest news with this car was its clever 1.4-litre MultiAir petrol engine, a unit offering the power you'd associate with a much larger unit but the fuel economy of something quite small and feeble. The range was tweaked in Spring 2011, with the MyLife trim level appearing and the Eleganza versions being ditched. Finally, in 2012, Fiat decided to revise the Punto again, ditching the Evo badge and reverting to plain and simple Punto, as it should always have been.

The clean, classy looks of the Grande Punto were a definite strongpoint: whether Fiat managed to retain this with the Punto Evo is something you'll need to decide for yourself. Certainly, the Evo's look packs in a shade more aggression, with the indicators relocated outside the main headlight clusters and the grille dropped lower down the nose, but the effect is fussier than before. At the rear, the tail light design is attractive and the bumper insert mirrors the shape made by the grille and intake at the front. Inside, this car made a far more obvious step forward. The quality of the plastics and fabrics used is very impressive and the two tone colour schemes on the plusher models work well. The dashboard is sculpted around the consoles and air vents with chrome and gloss black inserts adding to the upmarket ambience. The control systems are easy to work out and particular mention should go to the nicely shaped steering wheel. The Punto is one of the larger cars in the supermini sector and with its lengthy wheelbase comes a spacious interior. The 275-litre boot isn't outstanding for the class but rear leg and headroom is very good indeed and the rear seat squabs can flip up to provide an almost flat loading bay. Fiat weren't shy in piling technological features into the Punto Evo. All models come with a comprehensive safety specification that includes a full complement of airbags, including a driver's knee airbag. The Dualogic robotised gearbox is available with selected engine options and depending on the trim level, the car can also come with daytime running lights, adaptive cornering fog lights, a hill holder function, the Sky Dome electric sunroof and some tempting infotainment options. Fiat was particularly proud of its award-winning Blue&Me system which incorporates Bluetooth wireless technology with voice recognition, a USB and MP3 compatible stereo and Blue&Me TomTom satellite navigation. In partnership with leading manufacturer TomTom, Fiat also offered a removable satellite navigation unit that integrates seamlessly with the car's other system and can be controlled via voice recognition or buttons on the steering wheel. If you're worried about your used supermini looking old hat, the Punto Evo could be the answer. 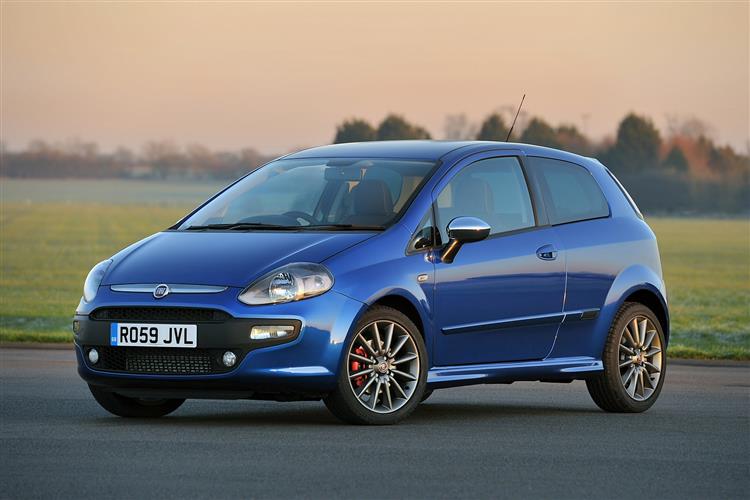