Back in the mists of time, the pick-up truck was devised to do rough fetching and carrying, often away from well-surfaced roads and usually of items that you wouldn't want in the back of your van, let alone your car boot. It was an unassuming utility vehicle but today, certain models have evolved into some of boldest and most imposing cars on the road. Nissan's Navara pick-up has been at the forefront of this realignment and a used version delivers more flash for the cash than you can get almost anywhere else.

When it first cropped up on a Nissan on these shores, Navara was more of a trim level than a model in its own right. Nissan's D22 Series pick-up was sold globally with different names in different markets. Known as the Frontier in America, the Winner in the Middle East and the Hard Body in South Africa, the vehicle was somewhat disappointingly called the Nissan Pickup in the UK. When interest began to grow in using pick-ups as leisure vehicles, fuelled by the tax savings that could be accrued by UK business users, Nissan was one of the first manufacturers to react. It introduced the Navara versions of the D22 to cater for this market. Their aggressive looks and car-like specifications were a big hit in this country and when the D40 Series pick-up was launched to replace the D22, Nissan called the new vehicle Navara in the UK. The Navara was launched in 2005 and instantly felt like a major improvement over the old Nissan Pickup. It was a more sophisticated proposition in most respects and targeted squarely at the burgeoning lifestyle sector of the pick-up market. Versions of the old Pickup continued to be sold as basic working vehicles but the Navara took all the attention and most of the sales. The Pathfinder, a family 4x4 passenger car, rides on the same mechanicals. Initially, there were SE, Aventura and Outlaw trim levels offering higher specifications and more visual drama as you ascended the range. A 2.5-litre four-cylinder diesel engine provided the power and there was a choice of Double Cab or King Cab, the latter offering small rear seats accessed through a pair of rear backwards-opening 'suicide' doors. The special edition had long been a popular marketing device in the pick-up sector with manufacturers dreaming up ever more elaborately named and opulently specified models to attract 'lifestyle' pick-up buyers looking to make an impact. Nissan proved to be a master at this and used buyers will find weird and wonderful versions of the Navara called X-Back, and Mammoth as well as the Long Way Down and Die Hard 4.0 models which were tie-ins with the Ewan McGregor TV show and the Bruce Willis film respectively. In 2010, the Navara received a wide-ranging set of revisions, the most salient being the introduction of a 3.0-litre V6 diesel engine to top the range. There was also a power upgrade to the 2.5-lire diesel and tweaks to the styling inside and out. The standard trim levels changed to Acenta and Tekna at this time.

What You Getword count: 335

The Navara is no shrinking violet in the styling stakes with its aggressive front end and dramatically flared wheelarches. At 5,220mm in length and with a 3,200mm wheelbase, it's a substantial vehicle too, significantly larger than the previous generation Nissan Pickup. That means there's plenty of cabin space, even in the halfway-house King Cab version with its backwards-opening doors and occasional rear seats. The King Cab is a bit of a compromise so nine out of ten Navara buyers went for the Double Cab model. Its wide body and cabin length of 1,511mm means that there's plenty of room for five. The Navara made real steps forward in becoming a more comfortable and luxurious proposition. It's a highly practical vehicle with solid build and materials that are durable without completely forgoing a quality feel. Storage space in the cabin, not usually a strong point for pick-ups, isn't half bad thanks to the inclusion of a 6.0-litre box in the centre console and twin gloveboxes in front of the passenger. There are also specialist spaces for coins, cups and cards along with a neat sunglasses holder which folds down from a console in the roof. It also helps that the seats can be folded into various positions to further boost the capacity. You can flip up the bases of the back seats to access a hidden storage compartment that would be useful to keep valuable tools away from prying eyes. You can also flat-fold the front passenger seat for longish items that won't fit in the pick-up section. The 1,861mm by 1,560mm load deck can support up to 1,045kg of weight and many models will have some form of removable load cover fitted to help protect cargo from the elements. Another popular option that will appear on many used Navaras is the C-Channel system which is comprised of five rails mounted into the loadbay sides and floor. These can accommodate special cleats which slide along and lock into place to provide lashing points for securing loads. 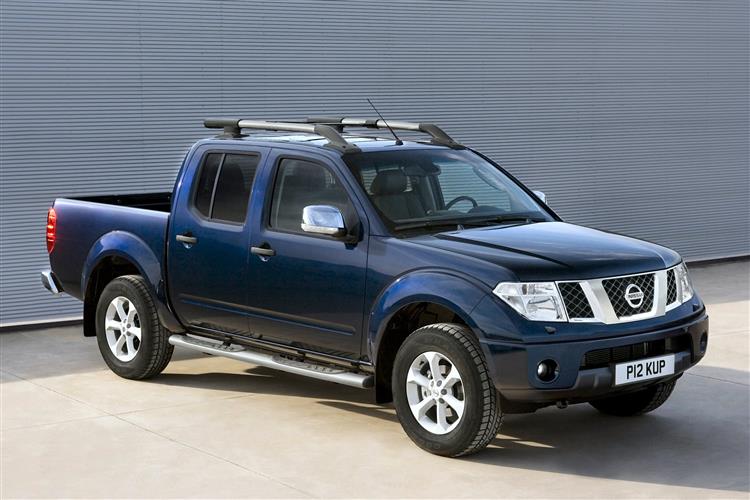