THIS IS OPEN SEASON (some text hidden)

In this country at least, folding hard top roofs are a winning strategy. It's been well publicised that despite racking up a fairly hefty number of rainy days per year, we take to convertible cars in an apparently inordinate way. The folding hard top offers a rigid metal shield for the elements to thwart themselves against and when your car is parked up overnight, there's reassuringly robust protection against Stanley knife-wielding hoodies. On those fleeting occasions that the sun makes an appearance, a single press of a button and the roof disappears into the boot and all the inherent compromises that come with the purchase of a convertible car are forgotten. Lexus has done as much as any to try to smooth those compromises away and in the sleek shape of its IS 250C, it has a car that builds on the already great reliability record of the IS range. Here's what to look out for when you're shopping for a used example.

Lexus has had a folding hard topped car on sale in the UK since 2001 but you'll be forgiven for not knowing much about it. The SC 430 coupe proved extremely effective at slipping under the radar of most buyers and sales were correspondingly modest in the UK where the car's combination of thirsty V8 engine and relaxed driving manners were never going to play as well as they did in the SC's primary market in the US. The IS 250C has been a little more successful, but sales probably haven't lived up to Lexus' expectations. It's based on the chassis of the IS saloon, but where that car has four doors, the IS 250C's re-shell sees it given a sleek two-door coupe profile when the roof is up. The C aims to move the folding hard-top game on while maintaining the brand's traditional focus on quality, comfort and refinement. It first made landfall here in mid-2009, so there are bargains to be had from cars falling off the end of Lexus' three year warranty as buyers trade in for something newer. In that period, not a lot has changed for the IS 250C. The efficiency of the engine was improved for the 2011 model year, with an improvement in combined cycle performance to 30.7mpg and a 6g/km reduction in CO2 emissions to 213g/km. At the same time, the SE-I specification was improved to introduce rain-sensing wipers, an auto-dimming electrochromic rear view mirror and revised leather upholstery with heated front seats. Summer 2011 also saw the introduction of the Advance trim level.

What You Getword count: 392

A few cars invite their owners to leave removable roofs at home in the garage but the changeable UK climate is such that this remains a brave course of action. In a game of Russian roulette with the British summertime, there's only ever going to be one winner but the safe option of taking your roof with you presents its own problems, especially if it's made out of metal and powered by hefty electric motors. The major niggle is styling and Lexus appears to have done a reasonably job of addressing it. The car's rear overhang is 50mm longer than the saloon's to accommodate the folded roof but unlike some of its rivals, the IS 250C doesn't appear overly chubby around the hindquarters. Indeed, the slick looks that make the IS one of the most handsome compact executive saloons on sale are carried over reasonably successfully and also help the C achieve a low drag coefficient of 0.29 Cd. The roof itself folds into three and can lower in a mere 20 seconds. Its compact design, together with the elongated rear, means there's still a usable amount of boot space - enough, claims Lexus, for a golf bag to be squeezed in alongside the folded roof. Lexus interiors tend to be slick affairs and the basic design of the IS cabin has been altered so it functions more effectively in a convertible car. The instruments have been revised so they can be more easily seen when the roof is down and the sun is out, while access to the rear seats has been simplified in this two-door car by elongated door openings. There's also a mechanism that folds and slides the front seat at the touch of a button so passengers can get into the back without too much clambering. Equipment levels are very good and include a climate control system that adapts automatically to optimise its performance when the roof is lowered and speed is increased. There's also a premium Mark Levinson stereo that pulls a similar trick, upping the bass when the roof goes down. This isn't designed to rattle the neighbourhood's windows but to compensate for the escaping sound. Safety equipment includes VDIM Vehicle Dynamics Integrated Control and VSC stability control but there are also redesigned airbags that give better protection than standard items when the roof is lowered. 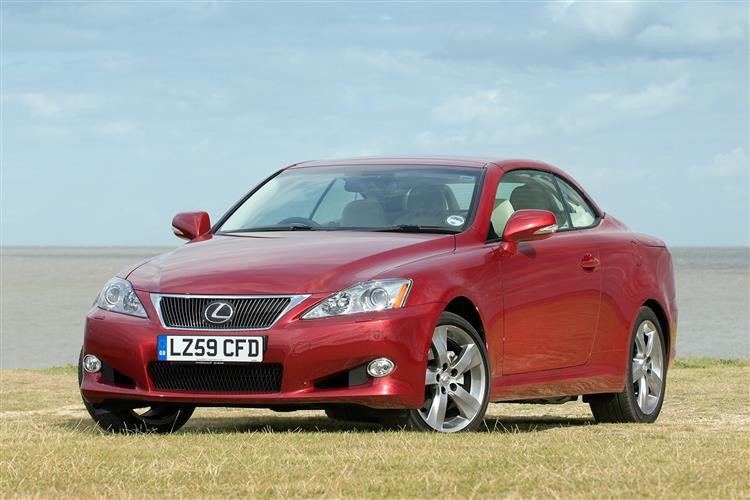