Is there a more underrated car on the market than Toyota's Auris? Think about that one for a moment. The successor to the Corolla is a thoroughly engineered and brilliantly practical thing that's hugely popular across the globe but barely gets a look in here. Are we really that obsessed with sporty handling and image to overlook a car with so many admirable qualities? It seems we are, but when it comes to buying used, reliability is often the key motivator and there's very little that can touch an Auris in that regard. It's got a brilliant record on warranty claims and what's more, previous owners are usually diligent types. If you like the price tag of a used car but don't want the headaches, this could very well be the family hatchback you'll need to look to, especially in the first generation facelifted form we examine here, a car we first saw in 2010.

The sharp-eyed amongst you might well have realised that the Auris actually first appeared in 2007 to a rather muted reception. It was initially available in three or five-door form with an engine range running from 1.4-litre petrols and diesels to the 2.2-litre diesel powering the T180 which was the Auris' offering in the hot hatchback sector. That all changed in 2010 when Toyota took a long hard look at what it was doing with the Auris and pared the range right back. It also enjoyed a facelift, with sharper styling and suspension retuned to better suit British roads. More significantly, a hybrid model was introduced using much the same technology as seen in the Prius. These updates didn't have a massive effect on sales but they turned a car that was, admittedly, a little dull into something that was a bit more noteworthy. The hybrid model in particular is a real grower. We've run one here and it was loved by every staff member who got their hands on it. Maybe not at first, but we were all sad to hand the keys back. There's a lot to be said for inexpensive, discreet and hassle-free utility. The trim structure was also revised, with the Auris getting T2, TR and SR trims while the Auris hybrid got ritzier T4 and T Spirit specifications. Toyota later introduced the Edition and Colour Collection models to the Auris line up to sustain things as the life of this generation design wound to a close at the end of 2012.

What You Getword count: 454

This isn't the kind of car you buy in a bid to get noticed but even given its conservative design brief, the original Auris did champion anonymity to an impressive degree. Hence the tweaks introduced in the first generation model's 2010 facelift that Toyota reckoned went all the way back to the sheet metal. The front end, for example, was completely restyled, the fresh and deeper bumper with its integrated fog lamps sitting below smarter swept-back headlamps, a revised bonnet profile with stronger crease lines and a grille that adopted the Toyota family identity established by the its larger Avensis and Verso stablemates. Turn indicator lights were integrated into the door mirrors, while at the rear, a neat flash of chrome across the top of the number plate complemented revised lamp clusters and further bumper restyling with extended corner sections intended to create what the stylists called a "catamaran" look - whatever that is. And the interior? Well, from the beginning of the first generation Auris model's life, that was always a little more cutting edge than the panelwork. The principle front cabin feature is a dramatic-looking centre console that houses the handbrake and gearlever and arches up and away from the floor to form a kind of flying buttress. The French designers were apparently inspired to create this by a certain Paris cathedral, causing the original version of this car to be dubbed 'the hatchback of Notre Dame'. But I digress, Anyway, there's storage under this thing and its high surface does bring the short gearlever more easily to hand. All of this is common to all first generation Auris models, but if you do find yourself in a post-2010 facelift version, you should notice a general improvement in the perception of quality thanks to the use of nicer soft-touch material across the top of the instrument binnacle and around the glovebox. There's sharper white illumination for the instrument dials too. Perhaps what's most important about the overall Auris design however, is the way that it has been created from the inside outwards, the development team maximising occupant space in one of the biggest shapes in the sector by employing elements such as a flat passenger floor and high window surfaces. That floor's the first thing you notice when sitting in the back. Without a chunky transmission tunnel to get in the way, three adults can be seated in reasonable comfort - which is unusual in a car of this class. Reclining rear backrests for extra comfort on longer journeys are a nice touch too. Out back, though the boot is shorter and narrower than some rivals, it still offers a healthy 354-litres of space before you flatten the 60:40 split-folding rear bench. 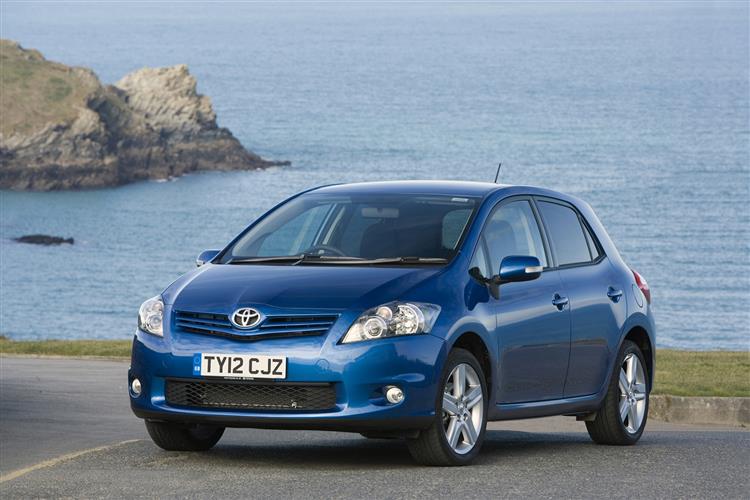