The second generation SEAT Leon was a car that started off slow and got a lot better as it developed throughout its lifespan. There are a number of cars that you could say that about - think Jaguar S Type and BMW X3 as examples - and the one thing they have in common is that they're usually ignored by used car buyers who only remember the first, rather sniffy press reports. Go for a late model year and you get a cracking used car bargain. The Leon is a perfect example.

The original MK1 SEAT Leon was a huge success, becoming for a short while the go-to sporty hatch for British buyers. The second generation car never enjoyed the same success and it's largely down to a rare instance of Volkswagen Group clumsy brand management rather than any inherent fault of the car. When the second generation Leon was launched in 2005, there were no sporty FR or Cupra models available. Without these flagship models and with less aggressive styling, the Leon instantly lost its mojo. SEAT introduced the sportier cars later but momentum had been lost and the damage was done. The Leon subsequently worked twice as hard to impress and the vehicles we look at here are the facelifted models that were unveiled at the 2009 Geneva Show. You'll recognise these cars by the revised grille with a smaller SEAT logo and more stylised chrome surround as well as bigger headlights. We'll cover models right up to when this Leon was replaced by a third-generation model unveiled at the Paris Motor Show in autumn of 2012. Here's how to get ahead of the game when buying used.

What You Getword count: 300

This remains a very good looking car. British designer Steve Lewis has created a shape of sporting simplicity that's all about shapes and curves: the swooping flankline, the almond-shaped headlamps. Then there are lovely touches like the concealed rear door handles that you access via scoops in the polycarbonate rear quarterlights. Tweaks to this revised model are tiny, limited to reshaped light clusters, revised bumpers and a different grille with a smaller SEAT badge at its centre. Inside, perceived quality has been ratcheted up a good few notches over the original MK2 model, with a nicer steering wheel, a redesign for the centre console and instruments and fewer of the cheap plastics that in the very first version of this car, reminded you just why it was so much cheaper than a Golf. Both the front seat and the steering wheel are multi-adjustable, which is just as well since the sloping nose curves so rapidly away out of your view that shorter drivers may want to specify parking sensors. Another practical drawback to beautiful design is found in the chunkiness of the front screen pillars, caused due to the way the wipers park themselves vertically rather than at the bottom of the screen. At least rear visibility is better than it was originally, thanks to a slightly larger rear screen. Back seat passengers will find this Leon slightly bigger than the Focus or Golf family hatchback norm. There still isn't really proper room for three large adults here but two six footers will be quite comfortable, even over very long journeys. The rear tailgate opens wide to reveal a 341-litre load bay that's a little awkwardly shaped for bulky items but is otherwise perfectly adequate for this class of car, particularly if you extend it via the split-folding rear seats. 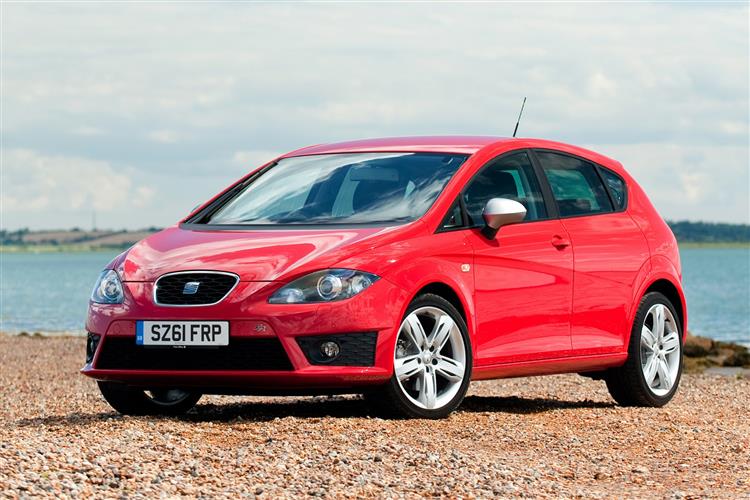