PUT IT ON MY CHARGE (some text hidden)

At its launch in 2010, the Toyota Auris hybrid's importance lay less in the HSD (or Hybrid Synergy Drive) technology it carried - that was simply borrowed from Toyota's existing Prius - and more in the fact that this was the first time we'd seen such a futuristic powertrain so affordably and un-showily deployed in an ordinary family hatchback. Virtually identically to its conventional petrol and diesel siblings, here was a car that didn't shout its owner's green credentials from the rooftops. Here was the first real stage of the Toyota masterplan - to take hybrid motoring mainstream. No more optimistic premium pricing based on buying into vague celebrity-driven notions of eco-friendliness. This was hard-nosed hybrid motoring that confronted the diesel establishment head-on, offering a compelling package too sensible for family hatchback buyers to ignore. That was Toyota's take. But was the market ready for it? Sales weren't exactly stratospheric, but there are some very well looked after used examples on the market. Here's how to track one down.

The Auris took over the mantle from the Corolla back in 2007 but it wasn't until 2010 that the Auris HSD made its very low-key appearance. It marked the first of a new breed of hybrids, namely one that took this mind-bending petrol/electric technology and made it seem an everyday thing. It seems strange to think of it now, but thirty years ago, buying a diesel-engined car wasn't so very different in the statement it would make to the neighbours as buying a hybrid model is today. Buying a diesel back then marked you out as someone for whom low running costs and high efficiency were clearly priorities over performance. But diesels became commonplace, unremarkable and an obvious option on every mainstream family car. That's the direction the Auris HSD pointed us in back in 2010. And it was prescient too. Fast forward to today and you can buy all manner of hybrid vehicles that are identifiable only by a discreet badge on the back. The technology has truly been democratised. Toyota only sold the Auris HSD in the top T4 and T Spirit trim levels, recognising that someone really looking to cut costs would always be better served smoking about in a poverty-spec diesel model. So you're not going to go shy on equipment. The other upside of that is that most owners have the funds to look after their cars properly. This model Auris HSD wasn't actually on sale for too long, the replacement arriving at the end of 2012.

What You Getword count: 94

Whichever Auris Hybrid you choose, you should find equipment levels to be reasonable for the money being asked. Expect to find a 6-speaker MP3-compatible CD stereo with steering wheel-mounted audio controls and USB connectivity, alloy wheels, hill-start assist control, an ant-glare driver's rear view mirror, air conditioning, a trip computer and daytime running lights. Safety-wise, you can expect to find anti-whiplash head restraints, twin front, side and curtain airbags (plus a 'bag for the driver's knee), ISOFIX fittings for rear child seats, as well as the usual braking aids, plus stability and traction control. 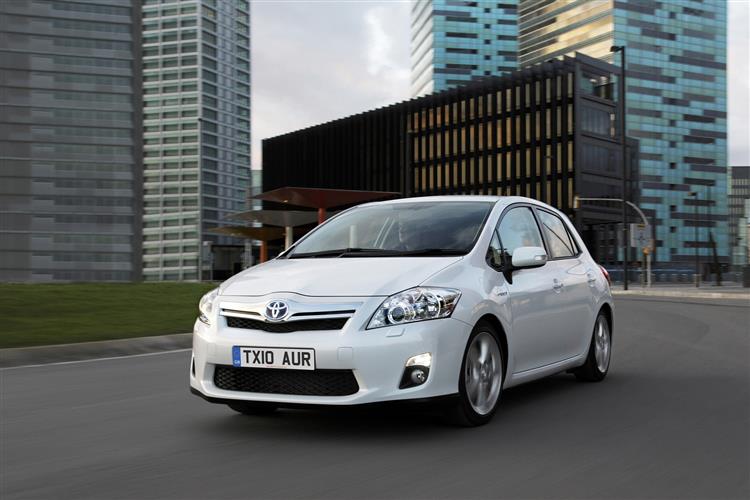