For all their history of developing cars that can drive across ploughed fields while wearing a hat, the French haven't actually achieved too much when it comes to building 4x4s. Those with long memories will remember the Citroen Mehari while in more recent years there have been cars like the Renault Scenic RX4 and Kangoo Trekka. When it came to capitalising on the phenomenal growth of lifestyle 4x4s, however, it's fair to say that the French had comprehensively missed the bateau. The Citroen C-Crosser is one example of France belatedly making good. Here's how to track down a decent used example.

Citroen's SUV blind spot came to an end in 2007 when the company teamed up with Mitsubishi and sister company Peugeot. Mitsubishi's Outlander was restyled and badged as the Peugeot 4007 and the Citroen C-Crosser. Sharing the costs of a joint venture made a lot of sense. PSA Peugeot Citroen got a cut price entry into the lucrative SUV market and Mitsubishi got access to some of the best diesel engine technology around. Although building a 4x4 with no real heritage to fall back on might have seemed something of a gamble for Citroen, the way that the company dipped its toe into the water was really very smart. And indeed the C-Crosser turned out to be a really good vehicle, although slow sales suggested that the British public didn't really twig. It was probably the best looking of the triumvirate and as a used proposition you're looking at bargain Citroen pricing with renowned Mitsubishi reliability. A 2.4-litre petrol model was introduced in summer 2008 although sales were predictably slow. Citroen also debuted a C-Crosser commercial vehicle at the 2008 London Motor Show. At the end of 2009, Citroen introduced the DCS robotised manual gearbox for the diesel car, and also improved the interior finish. Bluetooth connectivity was now standard specification on Exclusive versions, allowing for compatible mobile phones to be connected to the integrated hands-free kit. Automatic windscreen wipers were specified as standard across the range and all versions benefited from an updated dashboard design with chrome inserts around the dials and vents, plus an improved finish on the door panels.

There's only so much that Citroen could do with a piece of engineering with firmly established 'hard points' and the rear three quarter view looks decidedly Japanese, the tapered C-pillars and bold wheelarches betraying the car's Oriental origins. Likewise, the interior has a distinctly Eastern feel to it as well. There's none of the trademark Citroen lateral thinking, the fascia being rather conventional. Two cowled dials house the major instruments and the centre console is sparse and rather plasticky it has to be said. Despite this, there isn't too much you can finger as being wrong with the ergonomics. The ventilation controls are easy to fathom and the multifunction controls on the steering wheel are a nice touch. Citroen's penchant for functionality and innovation is clearly visible in the C-Crosser, with its flexible 5+2 seating configuration. For ease of use when exiting the third row seats, or when reconfiguring the boot lay-out, the second row seats can be electronically folded forwards using the buttons located internally next to the rear wheel arches. The two occasional use seats in the rear can be simply folded away under the floor, while the second row of seating also slides and reclines for greater comfort. The C-Crosser also offers plenty of stowage space throughout, with over 20 individual storage compartments. All five rear seats can be folded away easily to provide a flat floor and vast load space of up to 1,686-litres, while the boot capacity is up to 510-litres when the second row of seats are in use. To help loading items into the huge boot space, there's a split two-piece tailgate. Folded down, the lower section drops the sill by 64mm allowing heavy goods to be easily loaded, while doubling as a handy bench, capable of supporting up to 200kg. 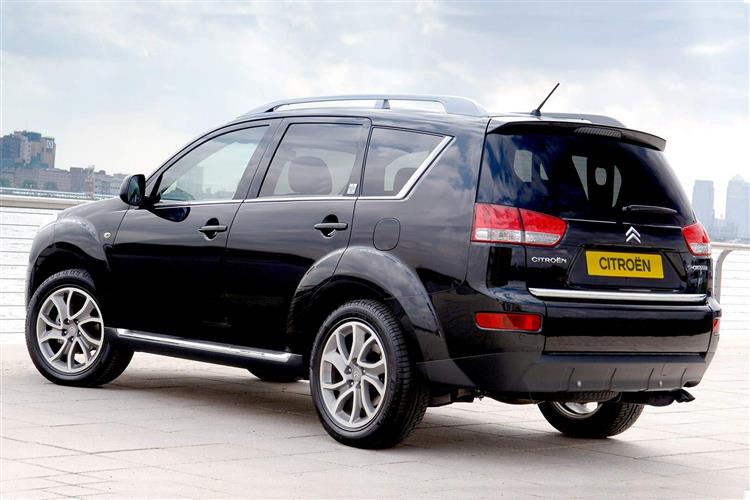