BLINK AND YOU'LL MISS IT (some text hidden)

The Aston Martin Virage had to be one of the most puzzling vehicles launched in the last decade. The fact that it was only on sale for a year probably tells you all you need to know about the public reaction to this vehicle. Slotting between the existing DB9 and DBS models into a gap that was imperceptible to many, the Virage was always going to face an uphill task and so it proved. That doesn't make it a bad car and, if anything, makes the few used examples you can find even bigger bargains. Although the marketing may have been questionable, there was precious little wrong with the hardware.

It's fairly common knowledge in the motoring world that Aston Martin enjoyed the considerable largesse of the Ford Motor Company, who bought a 75 per cent stake in Aston Martin in 1987, before the Newport Pagnell firm became wholly owned by the Blue Oval in 1994. This tenure lasted until 2007, when the company was sold to a consortium led by Prodrive chairman Dave Richards. During the Ford years, cars like the DB9 and Vantage were developed and in the subsequent years we've seen several spin-offs of these themes, with the updated DB9, DBS, Vanquish and Virage all based on much the same chassis and engine technology. The Virage had a tough start. Unveiled at a Geneva motor show that saw the limelight stolen by the Lamborghini Aventador, the Ferrari FF and the E-type Jaguar's 50th birthday, the Virage was overlooked by much of the world's press. Compound that problem with a cramped stand, a show car in an unflattering colour and with styling that most found virtually indistinguishable from the DB9 - a car that continued in the Aston Martin line up - and it was a low-key launch. Things didn't get much better with initial reviews that were broadly positive about the car but questioned what the point of it was when the DB9 and DBS models were also on sale. It was, perhaps, the ultimate manifestation of Aston's hidebound 'Russian Doll' styling philosophy and its short lifespan told of a certain customer weariness of this policy. The Virage was deleted quietly in 2012, replaced by an updated DB9. The DBS shortly followed it.

What You Getword count: 258

Aston Martin CEO, Dr Ulrich Bez countered criticism of the Virage's lookalike styling by pointing out that "100 years of automotive history has demonstrated that evolution delivers the best solutions in time." As we've seen, evolution can also branch off into dead ends though. The front wings feature side strakes each housing six LEDs forming the side repeaters. Custom side sills carry the simplicity of the front bumper through to the rear diffuser which houses a body-coloured blade accentuating the width of the car. Open the swan wing doors and you'll find hand-stitched Bridge of Weir leather with a pinstripe welt that flows down either side of the fascia and along the seat and door, drawing your eye through the car. Aston regulars will be relieved to know that here, the clunky Volvo-sourced satellite navigation system was replaced with a fully integrated system developed in conjunction with Garmin, operated via a four-way joystick and outputting mapping information to a 6.5 inch high resolution display. Equipment levels are as good as you'd expect for a vehicle carrying this price tag and which features a grand touring remit. A full-grain leather interior with alcantara headlining, walnut fascia trim, iridium silver centre console and electroluminescent displays set the tone and there's a whole host of electronics to play with, chief attraction being the 700W Dolby Pro Logic stereo system with integrated iPod connection. Customers also receive a tracking device, a hard disk for the sat nav, cruise control, front and rear parking sensors, a glass key and even a boot-mounted umbrella. 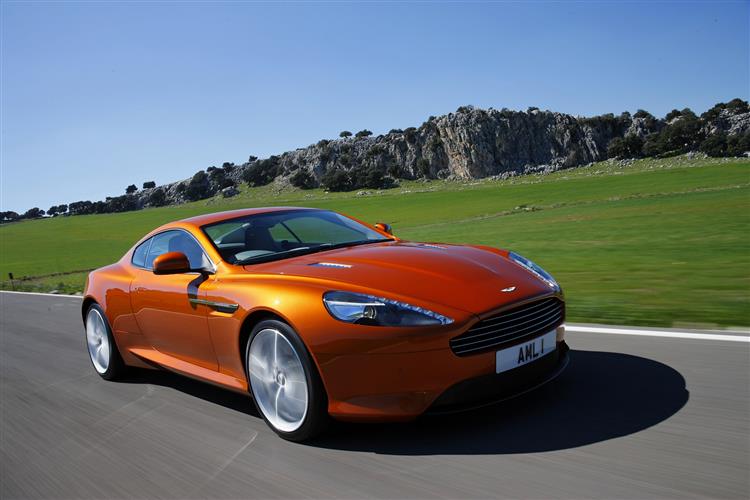