At first glance, the Subaru XV looks like a nailed-on winner. Chunky good looks underpinned by typically rugged Subaru engineering, a very good diesel engine option, engaging driving manners and a cool left-field image. Here's a car that should have been a far more common sight than it is. If you're looking for a used version, you're not going to have a lot of stock to choose from and you'll probably have to travel a fair way to get your hands on a car that's in the right trim, colour or condition. For a number of reasons though, the XV has turned into one of those cars that makes better sense used than it did at first when new. Want to know why? Read on.

To understand the XV, you first need to understand the effect external forces beyond Subaru's control had on its chances. Unlike Toyota, Honda and Nissan, who all have fairly extensive construction facilities within the EU, Subaru's product is built exclusively in Japan. When exhange rates started working against Subaru, its only option was to ask more for its cars. Of course, the company could have done a Daihatsu and decided Europe was a busted flush, but instead Subaru tried to tough it out. The XV received favourable reviews when it was announced with one huge proviso. A car that should have been priced against a Toyota RAV4 or a Nissan Qashqai was instead priced against the BMW X3 and the Audi Q3. It didn't take a genius to figure out how that would end. The savage exchange rate situation eased somewhat in 2013 and Subaru was able to slash £1,300 off the price of its entry level XV models, as well as offering interest-free deals on 2.0-litre diesel variants, sparking an upturn in sales. Outright victory in 4x4 Magazine's 'SUV of the Year' also clued in those who'd previously thought of buying something a bit more mainstream.

What You Getword count: 417

The XV's basic shape is a fairly faithful representation of the crossover norm but it's got a purposeful, chunky stance and some very interesting details. We love its five-spoke silver and black alloy wheels, if only because they remind us of Matchbox cars from our youth. The front end is very neatly finished with shapely headlamp pods, a gaping air intake below the number plate and a recognisable Subaru grille. Moving back, you get Audi allroad-style wheelarch extensions that look agreeably rugged and at the back end, a tidily finished rear bumper with dark cladding extending back from the rear wheel arch. You lose a lot of the contrast if you go for a dark paint shade, although some may baulk at the 'Tangerine Orange' finish which was used as the XV's launch colour but dropped from later cars. Inside, the cabin is a step up from the rather plasticky efforts that Subaru has managed in recent years - but it still doesn't quite have the quality feel you'd find in the best of this car's European rivals. Some of the ergonomics are a little haphazard too, such as the temperature controls at the bottom of the centre stack and the digital readout at the top. Or the way that the seat heater switches are hidden away behind the handbrake. There's some compensation to be found in the build quality though, which matches the rugged, built-to-last feeling that pervades across the rest of the car. There are some nice details too. Like the way the heater controls are large and chunky enough to be used by a gloved hand. And the way that the USB and AUX-in points are nicely stashed away in the closable compartment between the seats. Accessibility to the back is helped by doors that open wider than those fitted to an equivalent Impreza model. Once inside, Subaru talks of room for three adults, but the high centre transmission tunnel will make that difficult to achieve on all but the shortest journeys. It'll be fine for three children though. On the plus side, the XV's comparatively long wheelbase gives a decent amount of rear legroom, the space available helped by front seats that you can get your feet comfortably under. Out back, the 380-litre boot capacity is less than most rivals offer, but there is a small under-boot floor compartment and of course you can extend the capacity by pushing forward the rear bench - to 1270-litres, though the seats don't fold totally flat. 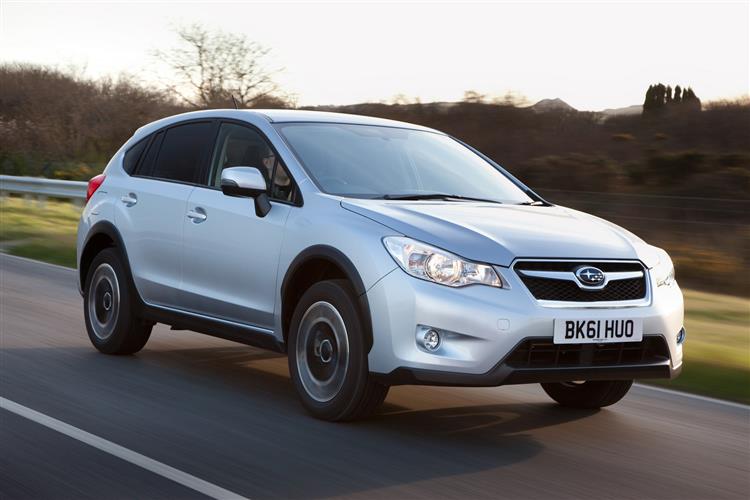