NO LEAFING IT TO CHANCE (some text hidden)

One of the big manufacturers had to be the first to take the plunge with a properly-developed all-electric car and it just so happened to be Nissan with its intriguing LEAF. While the car was the darling of those who wanted to make an environmental statement, was it ever any good as a practical everyday proposition? What's more, does it have what it takes to stand up as a credible used buy? Here's what to look for if you're considering something a bit different to the norm.

We'd had electric cars before the Nissan LEAF first made landfall in summer 2011 but they were rather half-baked things; quadricycles that didn't pass mass manufacturer safety legislation and converted citycars with little in the way of design flair. The LEAF was the first pure electric car developed from the ground up by a major manufacturer and it surprised more than a few people with the way it drove and the way it was marketed. Despite many industry commentators predicting it to be the thick end of £40,000 at launch, the asking price of £23,350 undercut many more prosaic diesel hatchbacks and brought electric motoring within the reach of many. To understand quite what a breakthrough this was, consider that this undercut the tiny Mitsubishi i-MiEV, the converted kei-car that was previously the state of the EV art. The LEAF was massively more sophisticated. For a start, it could seat five in comfort with a decent-sized boot. Its styling was modern, but it didn't look like something from toy town. It was based on the EV-11 electric car prototype which was in turn developed from the Nissan Tiida, but the LEAF was very much its own thing. The first wave of customers were the predictable contenders of organisations and local authorities looking to make a green statement, but after that a more diverse set of buyers started looking to the LEAF. Sales were hardly massive, with less than 1,500 cars shifted in the first two years on sale. The reasons were easy to identify. Although it was well priced for a specific EV, it was too expensive to compete with similarly-sized cars and the range of the car in real world conditions rarely matched up to Nissan's claims. The payback period over a petrol model was so long that unlike a Toyota Prius hybrid, the LEAF could rarely, if ever, be bought as a hard-nosed financial decision. Still, Nissan listened and brought out a substantially improved model in 2013. This had a better range, revised styling, more luggage space and better equipment provision. It drove better than ever too.

What You Getword count: 207

If you weren't clued into the fact that the Nissan LEAF was an electric car, you might not at first guess. The silhouette looks much like any other car in the Focus/Astra class and although the exterior detailing looks modern, it's far from wacky. There's plenty of front overhang to comply with European pedestrian protection regulations and the air intake in the front end even fools you into thinking there might be some sort of internal combustion engineering under the bonnet. The lack of a tail pipe will be the main giveaway that here is something not altogether conventional. There's decent space inside, with a bright and airy cabin, decent quality materials used throughout, respectable rear legroom and okay rear headroom. The boot is a reasonable size too, given the need to package the battery packs. In the later revised model, the luggage capacity went up by 40-litres to a respectable 370-litres. The rear seats do fold if you need more space, the later car moving the charger from the rear of the LEAF to under the bonnet. Doing this turned the LEAF into a far more practical proposition as there was now no obstacle in the middle of the boot floor when the seats are folded. 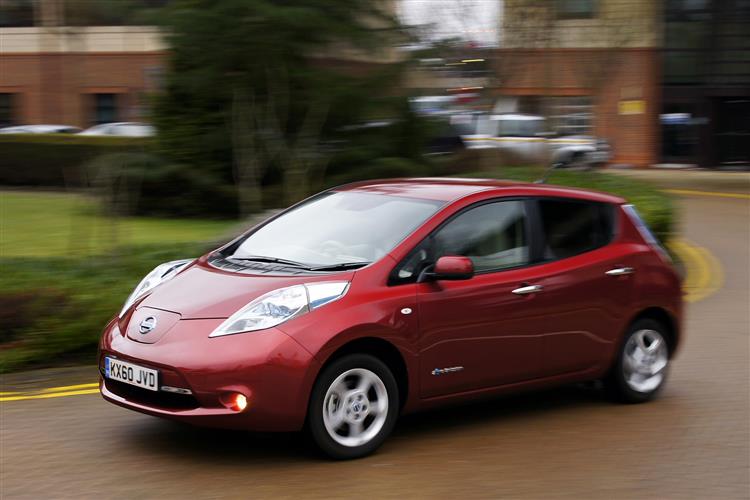