ALL CHANGE (some text hidden)

The Subaru Impreza carries with it some formidable heritage. Most will remember it as the car that blitzed all before it on rally stages, Colin McRae or Richard Burns engaged in sideways heroics that brought many fans to the marque. That was the mid-Nineties though. After more than a decade living off the back of this image, Subaru decided it was time for a change. Few were ready for quite how big the change would be and in chasing mainstream sales, Subaru took a massive risk. Here's how to track down a good early example of the post-'07 Impreza and separate the diamonds from the duffers.

Back in September 2007 when the Impreza range as launched, Subaru had yet to have the wind knocked out of it quite so savagely. It launched the Impreza five-door hatch in 1.5R, 2.0R, and 2.0RX guises, all with petrol engines, all with four-wheel drive. They even had low-range gearboxes as standard, a move which hinted at the fact that Subaru was still a company that prided itself on its engineering rather than its glitzy marketing. With either 107 or 150PS on tap, these cars weren't setting enthusiast's trousers on fire.The 230PS WRX arrived at the start of 2008, this time powered by a 2.5-litre flat-four engine. A whole host of even fast WRX variants followed, including the WRX STI, S Special Edition, Type UK four and five door models, as well as 330S and the eye-wateringly expensive Cosworth SC 400 models. Subaru even dropped the Impreza badge for the WRX, so keen was it to change the image.

What You Getword count: 248

Early examples of the post-'07 third generation Impreza range were split between maniac performance models and sensible family cars. The single conventional five-door bodystyle inevitably saw this design compared with the leading family hatchbacks of the day. This was in contrast to previous generation saloon and estate Impreza models, cars that had always resisted classification because there was nothing else quite like them. Few seemed to take account of the fact that, with its 4x4 transmission, the Impreza remained still quite unlike most other family hatchbacks. The specification from new was fairly generous. Aside from the all-wheel-drive, all models got alloy wheels, climate control, a CD stereo, a height and reach adjustable steering wheel, fog lamps, electric windows and a vehicle information display. There were also twin front, side and curtain airbags on all models. The 2.0-litre variants were available in RX trim which added various exterior styling accessories, including larger 17" alloy wheels. It also enhanced the equipment list with keyless entry, a starter button, cruise control and a 10-speaker stereo system. The WRX sports version features all of the above plus xenon headlamps, a six-disc auto changer and more aggressive styling. Despite the extensive kit list, the interior still felt rather workmanlike, with hard plastics used throughout and no concerted effort at a cohesive look and feel. This was where Subaru lagged most markedly behind mainstream marques like Ford, Vauxhall and Peugeot, who had passed through this phase and were now offering more elegant interior styling. 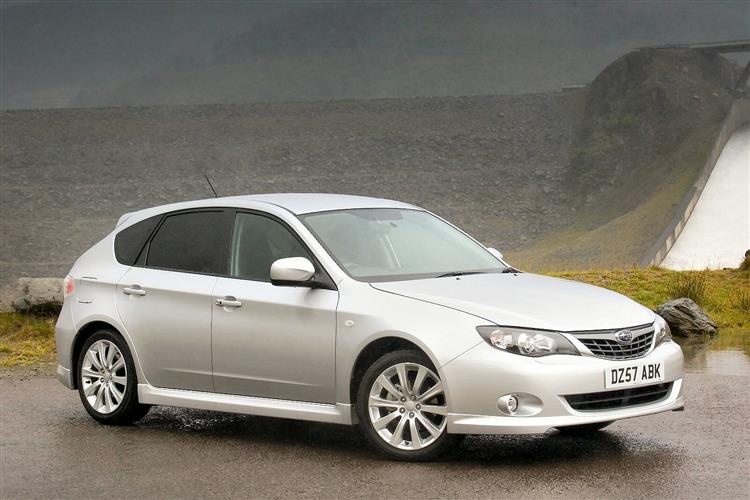