The first generation Kia Soul was a car that proved you didn't need to spend a lot to buy something individualistic. Perhaps the Soul was Kia's coming of age, the moment when it realised that it could build interesting design-led models and that these cars would be bought by people who weren't put off by what had previously been a bargain basement badge. As a used buy it makes a lot of sense. There's plenty of stock to choose from, the Soul has proven reliable and although residual values have held up fairly well, the car was cheap to begin with and is an affordable used proposition. If you're going to get a MK1 model, best to hunt for one of the later mildly facelifted versions which appeared from 2012 onwards. Here's how to find a good one.

Such has been the popularity of the Kia Soul that it's hard to believe that the car was originally launched as recently as 2009, but the car we look at here is the facelift version which appeared in UK dealers in 2012. That model was first displayed at the 2011 New York Auto Show with freshened up the styling and a punchier 138bhp direct injection petrol engine. The range comprised 1,2, Hunter and Quantum model upon introduction, with Echo and Shaker variants subsequently added. Despite the updates, the profile remained much the same, the inspiration for the original design coming from the Soulster concept car revealed at the North American International Auto Show in Detroit at the start of 2006. Styled by Kia's North American design studios in California, it demonstrated that square needn't be, you know, square. The Soul's done well for itself, offering a rugged-looking profile which isn't a 4x4 but which nevertheless offers the sort of practicality benefits supermini drivers have come to expect. The big issue in building a fashionable-looking car is that fashions come and go and the refreshed first generation Soul didn't have the longest lifespan, its 2014 replacement announced in summer 2013.

What You Getword count: 562

The thinking behind this car isn't too hard to fathom. Take the standard platform that Kia uses in its other Rio and Venga supermini models (the same one Hyundai has for its little i20) and get the guy who did the original Audi TT (stylist Peter Shreyer) to create a funky body to sit on it. In this case, a tall, almost military-style square-cut stance with a high bonnet, a vertical rear hatch and bulging wheelarches. Then simmer the whole thing in the Kia US design studio to give it a bit of surfshack attitude. Understand the back story and you won't wonder at a result that still gets other school run parents doing a double-take. Just how far you'll want to pique their interest will probably depend on just how far you've ventured up the range or into the options list. Entry-level versions look relatively conventional but go for one of the colour-coded interior options or jazz up the bodywork a little and you'll really be ready for a street cruise. All the classic 4x4 styling cues are here present and correct, from the chunky bumpers and flared wheel arches to the roof bars and the setsquare rear end. There's even a plastic vent behind the front wheel that houses the side repeater and could have been lifted direct from a Land Rover. Self-consciously funky? Perhaps, but it certainly makes a statement. And a more contemporary one in the case of the improved MK1 model we're looking at here which was updated in 2012 with minor changes to the front grille, the lights, the front bodywork and the wheels, plus trendy LED daytime running lights on plusher variants. A restyled front bumper gives the car a wider stance, while smarter LED rear lamps use the same trendy light pattern as that on the 2006 Detroit Auto Show Soul prototype that inspired this design in the first place. Enough on the attitude. What about the practicality? Well, this car may be only four metres long (only a fraction lengthier than a Fiesta) but its boxy shape bodes well here. Kia reckons that this design offers even more passenger space than a Nissan Qashqai which is 200mm longer and competes with far larger models. Don't get carried away though: three adults would struggle to comfortable occupy the back seat for long periods, but there is decent room for two, with head and legroom both good for what is essentially a stylish supermini on stilts. Older buyers will also like the high-set seats and wide-opening doors - though what they'll make of the bad boy styling is anybody's guess. At the wheel, all the controls are easy to find and straightforward to use - and the materials quality seems to be a little better than before. Changing the angle of the seatback is still fiddly though and the checked seat trim on many up-spec variants won't be to everyone's taste. Out back, there's plenty of luggage space - 340-litres with the rear seats in place. They do 60/40 split-fold rather half-heartedly (the backrest folds forward but the seat cushion stays put), which means the resulting load platform is high and well above the level of the boot floor. However, there is up to 818-litres of load room once you've freed up the space and top-spec Souls get a removable false floor for extra versatility. 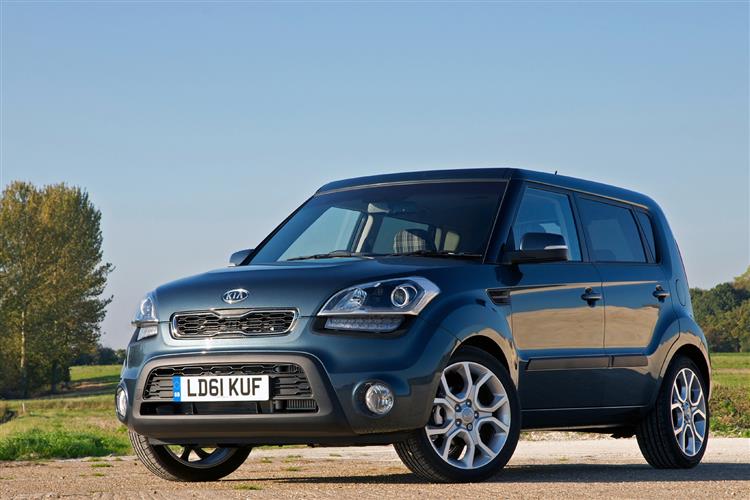