The SsangYong Korando is a vehicle that's been easy for the British public to overlook. After all, if you're in the market for a compact SUV, you could choose as Toyota RAV4, a Honda CR-V, a Mazda CX-5, a Hyundai ix35, a Kia Sportage or any one of a vast array of competitors, many of whom have bigger research and development budgets and all of which have deeper pockets with which to promote their products. So why would you choose a used Korando of all things? It's a rugged thing, and offers decent choice regarding trim, chassis setups and engine choice. Best of all, because there's such little public recognition, you can pick a solid used Korando up for much less than you'd think. All of which makes it a worthwhile used bet if you pride yourself on not following the pack.

Remember the old Korando of the Nineties? Probably not. That was a distinctly unlovely thing and SsangYong would probably have been better advised to rename this vehicle to bury memories of that car. Still, we did get an all-new Korando launched in 2011 and a very pleasant surprise it was too. Of course, a cynic could say it didn't have much to live up to, but the 2011 Korando looked good, featured a powerful but vocal diesel engine and wasn't too badly finished inside either. It could have been a contender but for some wholly optimistic pricing that ruled it from most people's shortlists. SsangYong tried to spark interest with the introduction of a special edition LE model in early 2012, introduced with a low interest finance deal and the carrot of five years free servicing and warranty. It barely caused a ripple, so it was just as well that bigger changes were to come. The following month saw a revised Korando appear at the Geneva Motor Show. Both convenience and safety specifications were improved, while CO2 emissions were also driven down. A newly added 2.0-litre 148bhp diesel engine brought emissions down to 147g/km (2WD, manual) and 157g/km (AWD, manual). The Korando also got a chrome-coated mesh radiator grille, while inside, the trim was upgraded to a carbon grain pattern with a high gloss finish applied to the switchgear and an improved LED illuminated instrument cluster. SsangYong's engineering team also strove to reduce the Korando's NVH (Noise, Vibration and Harshness) with revised gearing along with a new engine casing to reduce diesel engine noise. This generation Korando soldiered on until late 2013 when the car was revised again with a more extensive facelift. Most importantly, SsangYong managed to slash the asking price. What You Pay (used_pay)

What You Getword count: 128

The interior is cleanly styled, albeit a little shy of toys for those who expect Korean cars to come with more buttons and gadgets than a branch of PC World. Hide the badge on the steering wheel and few would be able to identify quite what car they were sitting in. Come to think of it, few would be able to identify the vehicle even with the help of the SsangYong badge on the wheel, but the build quality feels reasonably good, even if some of the materials have clearly - and justifiably - been built down to match the car's price. Rear legroom is generous, although the flipside of this looks to be a luggage capacity of 486-litres which is some way off the best in class. 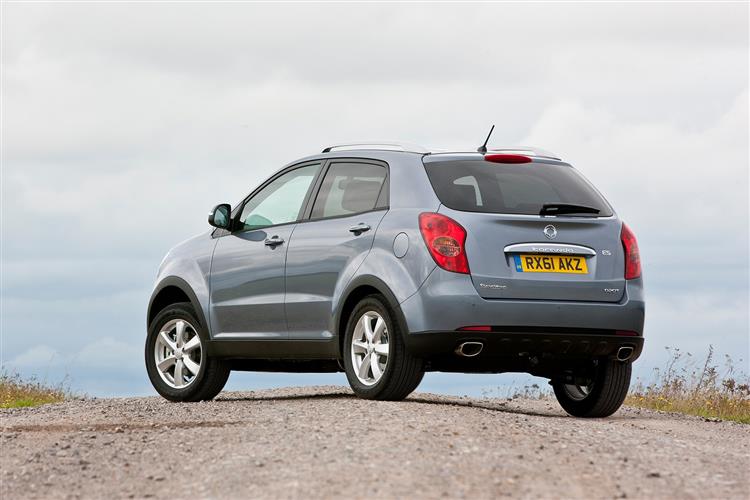