SUITED AND BOOTED (some text hidden)

You tend to know what you're getting when you buy a used Volvo saloon. Something solid, sensible and safe is the usual prescription. Staid too, if older models are anything to go by, but the S60 changed that script. The first generation car was surreptitiously sassy and the second generation car we look at here got even more adventurous. Does a Volvo saloon outside the usual comfort zone work as a used buy? Find out here.

The first generation Volvo S60, introduced back in 2000, has come to be seen as a real used car bargain. You can get a racy T5 model in fairly tidy order for a couple of grand, and it's a car that attracts very little in the way of attention to itself. But what of the second generation car? Could that move the S60 a little more upmarket? After all, the sight of banger-priced first generation cars probably wouldn't fill you with confidence as to the residual values of the second generation version. That model appeared in 2010 and it was soon joined by an estate variant, the V60, which seemed to make a bit more sense for most people, outselling the saloon by nearly three units to one. Six engines were available from launch; two diesels and four petrols. Entry into the range was the 163PS 2.0-litre D3 diesel model, while further up the line-up was the 205PS 2.4-litre D5 engine, offered with either manual or Geartronic transmission. Petrol engines entered the range with the 150PS 1.6-litre T3, then there was the 180PS 1.6-litre T4 variant, the 2.0-litre 240PS T5 and the flagship all-wheel-drive T6 petrol model with Geartronic gearbox. Featuring a 304PS 3.0-litre engine, the high-performance T6 remains a relatively uncommon sight. In February 2011, Volvo launched the 119g/km DRIVe 1.6 diesel model, while in December of that year, an automatic gearbox was offered with the DRIVe engine, keeping emissions and economy unchanged. In March 2013, Volvo revamped the R-DESIGN trim level, offering a more aggressive front end, smarter wheels, better seats and a more customisable digital display. R-Design models could be combined with all the engines available for the standard versions. Opt for the T6 and you could optionally boost performance to 329PS by opting for the Polestar software that charged the cars with an extra 25PS. The S60 range was replaced by an upgraded line-up for the 2014 model year.

What You Getword count: 192

That the old S60 was barely missed is testament to the success of the later car, a model that improves on that design in every conceivable way. In profile, the 'four-door coupe' shape has more than a passing resemblance to the Ford Mondeo that shares the same platform but the S60 emphasises its elevated position with more sinewy lines and upmarket detailing. The straight edges that used to characterise Volvo are banished in favour of gentle curves that ease into one another. The double headlights at the front and large brake light clusters at the rear mean you should be able to spot an S60 day or night. The cabin is an area where this car is able to leverage an advantage over the German compact executive models it competes with on price. The Volvo is simply a bigger thing and this car increases rear passenger space over the previous generation model. The Swedish brand's interior design has been impressing for a while and the S60 features company trademarks like the floating centre stack with storage space behind, while adding more of a sporty flavour with its metallic trim and supportive seating. 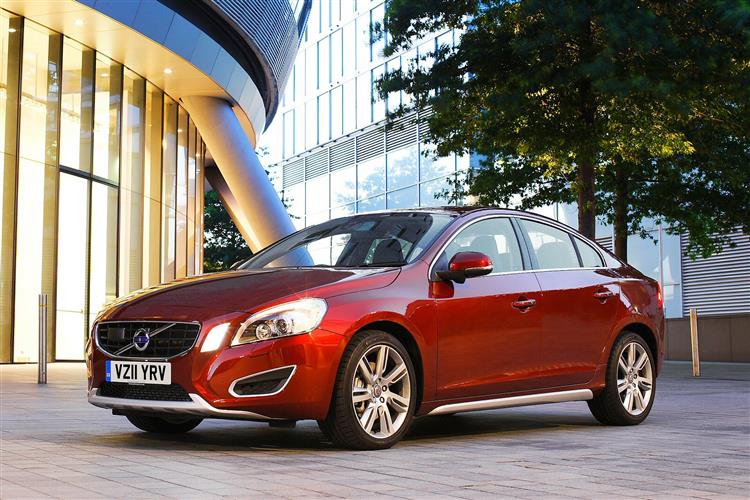