GUILTY AS CHARGED (some text hidden)

Jaguar has brought us some great, and indeed some not so great, coupes down the years. Right now, the company is on a great run of form and has been for quite some time. Perhaps the moment when Jaguar really came into its stride and started building the sort of cars we always hoped it might was in 2006 when the XK coupe and convertible models hit the market. These were followed a year later by the supercharged XKR, a car that embodied everything the company stood for. Here's how to track down a decent used example.

The Jaguar XK8 was a car that touched greatness in a number of ways but never quite made the grade. As the years roll by, the styling just looks better and better but the packaging, dynamics and efficiency measures of the car were never really anywhere approaching class competitive, let alone class-leading. Its replacement was a very different vehicle. Although the 2006 XK looked like an XK8 that had spent a bit of time in the gym, it was a radically improved car. The cabin was more spacious, the handling livelier and so much weight had been taken out of the chassis that economy was much improved. The supercharged XKR variants appeared in August 2006 with high-spec Portfolio models of the XKR debuting in March 2007. Since then, we've had quite a few special edition models come and go, but the big change occurred in 2009, when the old 4.2-litre V8 was swapped for a more powerful and efficient 5.0-litre unit. The racy XKR-S model was first seen at the 2011 Geneva Motor Show and landed in showrooms later that year. The suspension and steering modifications, as well as the Vulcan alloy wheels from the XKR-S, were later made available as the Dynamic Pack for the standard XKR and an XKR-S Convertible was launched in 2012. The pinnacle of the XKR line up, the racy 550PS XKR-S GT, was announced in 2013 with ten units being sold to the UK market at £135,000 each.

What You Getword count: 241

The earlier 4.2-litre XKRs are the most popular used trades so we'll concentrate on these here. It would be tempting to think of a car of this sort as an evolution of the old pre-2007 XK8-based XKR model. Tempting but wrong. This 'X150' generation car is built from entirely different stuff. The advanced aluminium construction and massively superior technology embodied in the latest XKR raised its game enormously. There was also a welcome injection of practicality to the XKR. The high hipline remained but Jaguar worked at making the interior feel a good deal airier, with a low scuttle and clever use of colour combinations. The wheelbase was increased by 162mm and rear occupants noticed the difference immediately. Up front, there was way more room around the pedal box and beneath the steering wheel. Gone was the rather mean boot of its predecessor - unforgivable in a car with Grand Touring pretensions - and in its place came a more versatile hatchback arrangement. Unlike many premium convertibles, the XKR drop top model relied on a fabric roof rather than the voguish folding hard top, but there are valid engineering reasons for doing so. Folding tin tops require a whole host of heavy electric motors to operate and the ethos of the XKR is clever design and light weight. This version may be a mere 1.5cm longer than its predecessor, but thanks to that advanced aluminium construction, its weight plummeted to 1,635kg. 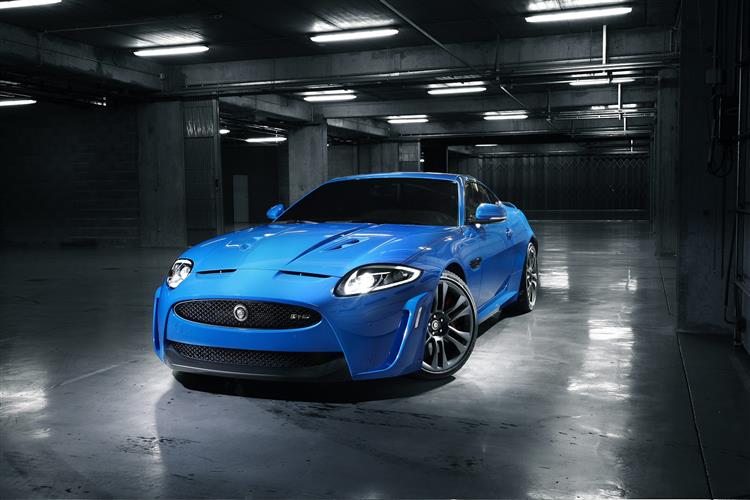