Buying a used car can often be a bit of a punt. The time when you could bring a mate who was handy with a spanner along to give a vehicle the once over doesn't really work with modern cars that feature a number of ECUs, multiplex wiring, complex mechanical self-protection strategies and such forth. Yet despite all that, the most technically complex small car in a number of years might also be the most reliable. The Lexus CT 200h features much the same hybrid underpinnings as the metronomically reliable Toyota Prius, just wrapped up in a far plusher package. If used car purchases give you the sweats, here's one that removes a lot of the risk.

Hybrid power may be a trendy thing to have in the compact executive segment right now but it certainly isn't a cheap option. You'll need a budget of around £40,000 for the BMW 3 Series or Mercedes C-Class options and even Lexus' own IS300h is a £30,000 car. Hence the appeal of the brand's entry-level CT200h model, which in 2011 was introduced at well under £25,000. That was possible because this car runs on the sunk investment of Prius underpinnings - mechanicals which are awarded more of a premium sheen with the adoption of the Lexus badge. 'CT' stands for 'Compact Tourer', Lexus-speak for 'Premium Hatchback', the class of car that sits below the 3 Series and C-Class segment that Lexus attacks with its IS model. Think models like Audi's A3, BMW's 1 Series, Mercedes' A-Class - maybe even Alfa Romeo's Giulietta and you'll get the idea. Cars that are no bigger than something Focus or Astra-sized but sit a world apart when it comes to perceived driveway cred. The first CT200h's arrived at the very start of 2011 but it didn't take too long for Lexus to start fiddling with the offering. At the end of 2011, the original line up of SE-I, SE-L, SE-L Premier and F-Sport were replaced by a new trim line up. The F-Sport badge survived the cull, but it was joined by S, SE, Luxury and Premier models. At the same time, the emissions of the entry-level car went down to 87g/km. A heavily revised version of the CT200h with the firm's now trademark spindle grille was shown at the end of 2013 for a 2014 model year launch.

What You Getword count: 396

Lexus talks of the shape of this CT being the 'latest interpretation of their L-Finesse design language'. If that's true, then it's a very different interpretation from that we've seen before, most notably with the sharp and shapely IS series saloon. The existence of that car meant that this one had necessarily to be a five-door hatchback to avoid product conflict, an unfamiliar shape for Lexus and one that some observers feel could do with a little more L-Finessing. That said, it's beautifully finished and well thought out in detail, clearly a quality product you'd be proud to have on your driveway. And be proud to sit behind the wheel of. Let's be clear about this: the cabin of this car embarrasses rival premium German efforts to a considerable degree. The equipment-adjusted price saving you'll enjoy over a BMW 1 Series or an Audi A3 may well mean that you can afford to specify leather and if you do so, you'll find that the hide is tactile and beautifully finished, complemented by aluminium inserts, satin wood trim finishing and carefully-crafted soft-touch plastics. We love the cockpit-like feel of the low-set, perfectly-sited driving position and the way all the controls fall neatly to hand and operate with a quality click - even the clever mouse control that operates the 7-inch LCD multi-display information screen. £25,000 doesn't often mean much in terms of real luxury any more - but it does here. But we haven't yet touched upon practicality, something you'd expect to be compromised by the need to find somewhere to stow the hybrid system's nickel-metal-hydride battery pack. As it turns out, clever packaging of this unit between the rear wheels means that it takes up very little bootspace, the 375-litre luggage bay actually being larger than that offered in a BMW 1 Series. Push forward to 60:40 split-folding rear seats and up to 985-litres of space is freed up. As for rear seat room, well if you're tempted to complain, then you clearly haven't sat in the back of a rival BMW 1 Series or Audi A3 very recently. Though it suffers from a high waistline which restricts the airiness of the cabin somewhat, this Lexus offers slightly more passenger space than either of these cars, with comfortable room for too adults (as long as they're not too tall), and space at a pinch for three. 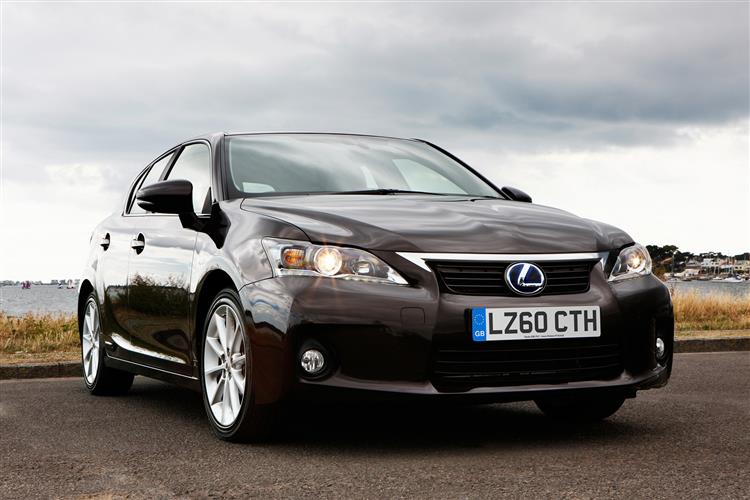