Renault's Twingo has carved a reputation for itself as possibly the most fun and irrepressible of all citycars. We didn't get the original one-box model that established the badge in Europe but we did get the second generation car and British buyers took it to their hearts, its introduction coinciding with a golden generation of Renault hatches. Here's what to look for when tracking down one of the facelifted second-generation Twingos, available between late 2011 and mid-2014.

The second-generation Twingo had already been on sale for four years by the time it was finally revised by Renault. Opinions differed at the time as to the effectiveness of the exterior styling work, but it certainly changed a car that was starting to look a little old into one that was hard to ignore. With great bulging auxiliary lighting pods sitting inboard of the main headlamp units, the somewhat frog-faced Twingo couldn't ever be mistaken for its far more conventional predecessor. When it first appeared, you had the conundrum of deciding which model to choose. Fortunately this wasn't the most taxing assignment as there was only one car; a 1.2-litre Dynamique version that would set you back the princely sum of £10,350 on the road. To help augment its chances, its importers threw in the Renault 4+ programme which offered retail customers a comprehensive four-year/100,000 mile warranty, free routine servicing for four years/48,000 miles, four years roadside cover and up to four years finance (lease or PCP, subject to status). A Renaultsport Twingo 133 model arrived in UK dealers in June 2012. By August 2013, Renault UK were putting the word out that they had just six new cars left in stock and these were rapidly snapped up ahead of an all-new rear-engined replacement arriving in 2014.

The Twingo was treated to quite a radical piece of cosmetic surgery in updated MK2 guise. The rather bland face of the old car was replaced by something a lot busier. The massive sidelights that bulge from the edge of the front grille are almost Nissan Juke-like, while the headlights got a set of eyelid-type mouldings that give it a sleepy-eyed look. At the back, there was a new bumper and light clusters and Renault's wheel designers must have been caning the overtime with 17 different designs for alloy rims and wheel trims. The front end of the Renaultsport model is quite a piece of work. It looks as if three separate proposals have all been incorporated. Less can be more. The cabin demonstrated Renault's aim to improve perceived quality with some interesting uses of colour and material. The seats feature smart patterns, with edging picked out in contrasting colours. All stitching, like the leather and side panels, is coordinated. The colours also feature on the door inserts and climate control and heater system controls. It gives the car a more considered and upmarket feel than the surprisingly bland finish of its predecessor. The two rear seats can slide 220mm fore and aft to prioritise space for either people or luggage and they also fold flat and then tumble forwards, offering up to 959-litres of space in this guise. The Renaultsport version got a smarter four-light front grille design and a front bumper incorporating what Renault calls an 'F1 blade'. At the rear, this hot Twingo featured a revised double-cluster light arrangement and is set apart by its black spoiler, a bumper design that builds in a diffuser and aerodynamic wheel arch extensions. 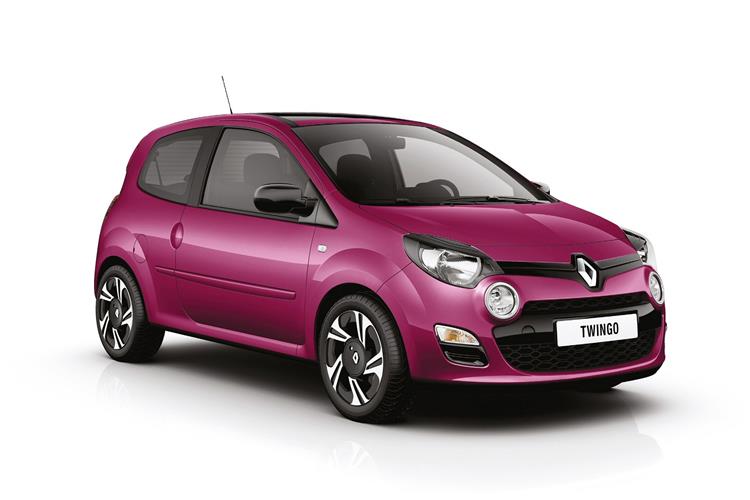