There are certain ideas that seem to gain real traction with the car buying public and then there are ideas like the Honda CR-Z. On paper, it seemed to have a lot going for it. Launched at a time when wasteful, costly to run sports coupes were apparently going out of fashion fast, strangled by the global economic crisis, the CR-Z was a lightweight hybrid that ought to have cleaned up. Trouble was, it was roundly ignored by the British public and catching sight of one these days is a rare treat. While it was a flop as a new car, does the CR-Z make the grade as a used car buy?

Talk about a long gestation. Way back in 2006 we'd seen the CR-Z at motor shows under the 'Remix' badge. By the time the first generation car arrived in UK dealerships in June 2010, it seemed overdue and underbaked. With a power output of just 121PS, it wasn't a particularly convincing sports car. Honda attempted to keep us interested, showing a Mugen model with 197bhp that didn't actually make production but graced the pages of the enthusiast press and acted as a showcase to the potential of this car. Honda's response was the car we look at here, the revised and more powerful CR-Z, announced at the tail end of 2012 for a 2013 model year launch. Styling updates, an increase in peak power to 137PS and a series of tweaks to make the car more exciting to drive ought to have piqued some interest but to many the CR-Z was still yesterday's news. The model only lasted until 2014, with Honda tailing off sales of all its hybrid cars.

What You Getword count: 459

Smartening tweaks to this improved model include revisions to the front bumper and grille, while at the rear, there's a more aerodynamic diffuser design with aluminium flakes embedded in the plastic to give it a bit of extra presence. Larger 17-inch alloy wheels too on the GT variant, though these do lose you a couple of tenths on the 0-62mph sprint time and add a fraction to your running cost figures. Under the skin lies a platform loosely shared with Honda's other Insight and Jazz hybrid models, but it's shorter and lighter with a wider track and a wheelbase that positions the wheels right out at the corners of the car for extra poise and balance. The interior is almost exactly as before, apart from the addition of this prominent 'S+' button on the steering wheel for extra acceleration when you need it. But then, vast changes weren't really needed here. Yes, it would be nice to see the cabin built from higher quality soft touch furnishings, but then Honda designers are rather good at building great cabins from pretty average materials: and this is a great cabin. You sit in big, winged sports seats and are faced with a resolutely modernist fascia. It ought to be all rather daunting, but somehow it isn't. Air conditioning and driving mode controls are grouped into two pods which sit either side of the main instrument binnacle and fall easily to hand just behind the wheel. Everything's perfectly positioned and feels just right, the chunky controls nice to use and displays with bold white fonts shining out from glossy black backgrounds. Lots of practical storage too, with three cupholders, plus big bins and boxes. The driving position's low and racy, so it helps that the nose is too. Only the rearward view is flawed, the back window intrusively bisected by a bar that divides the two-part rear screen. Back seat accommodation is for small children only, unless you've some particularly accommodating friends who need a lift home from the pub. The boot's reasonable though, with 225-litres on offer despite the necessarily raised height of the floor to accommodate the new lithium Ion batteries beneath. Fold down the rear seats and you can extend this to 401-litres, enough for a couple of suitcases or two golf bags. Original pricing for this CR-Z started from around £17,000 when it was first launched, but since then, Honda reduced the range of models on offer to only the two plushest Sport and GT variants. Which means that you needed a budget of around £21,000 for the Sport and around £23,000 for the GT with its leather trim and larger 17-inch wheels. There were also Sport-T and GT-T versions which got features like sat nav and Bluetooth. 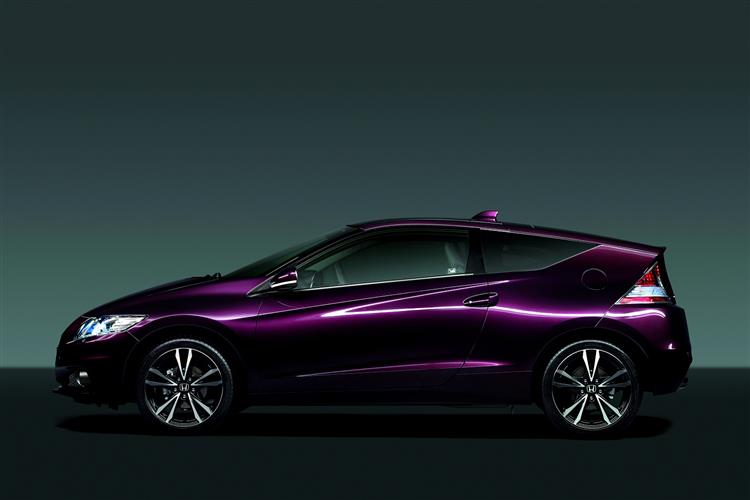