If ever you wanted to find a case study of a vehicle that didn't make a lot of sense when new but came into its own as a used buy, look no further than the Toyota Yaris Hybrid. When it was new, it was undercut on price by both petrol and diesel Yaris versions and it didn't take the processing power of Stephen Hawking to figure out that you needed to drive the thing absolutely huge mileages to get a return on your investment. That's not really going to happen with a car that does its best work in cities. So why not buy used, letting some other poor sap take the big financial hit? Here's what to look for when tracking down a used Yaris Hybrid.

As you're probably aware, Toyota has some history with hybrid cars. It's been selling Priuses since 1997 and applied its technical genius to the Lexus marque too, with hybrid limousines and SUVs. It was only a matter of time before it turned its attention to the big-selling supermini Yaris. On paper, a hybrid Yaris made all sorts of sense. They were mainly used in cities or for shorter journeys where the hybrid motor would have the biggest benefit, so it seemed a natural fit. The Yaris Hybrid duly arrived in summer 2012 and straight off the bat the numbers didn't really add up. For those averaging 7,500 miles a year, the conventional 1.33 petrol-engined car made much more financial sense. The only way the Hybrid made a convincing case for itself was when it was used in the London congestion charging zone on a fairly regular basis. Otherwise, you were around £650 down per year. Sales were slow as a result, with Hybrids accounting for just one in every 16 Yarises sold. Toyota persisted with the Yaris Hybrid through the 2014 model update.

What You Getword count: 212

The styling of the Yaris morphed from the old rounded and cuddly theme to a more chiselled and assertive look with this third generation car. In the words of Chief Designer Dezi Nagaya, the exterior has a "keen" appearance, witnessed particularly in the front end with its slim, horizontal headlights and prominent, deep lower air intake that anchors the car's wide stance, broadcasting a low centre of gravity. Shorter front and rear overhangs, a 50mm increase in the wheelbase and more prominent wheelarches gave the car a sportier look. The cabin feels solidly screwed together. That said, apart from the multi-function steering wheel and Touch & Go multi-media system, the interior remains much as with the previous second generation Yaris - which is to say unadventurous in its styling, with the exception of some heavily grained dash top plastics. The controls are sensibly positioned and the dash features an eco gauge to help you drive more economically, but with rival superminis offering some highly intelligent and charismatic interior designs, this little Toyota falls a little short. It's a shame because the car does the hard work so effectively and may lose sales due to that last one per cent of interior tinsel that's often all that's needed to swing a buying decision. 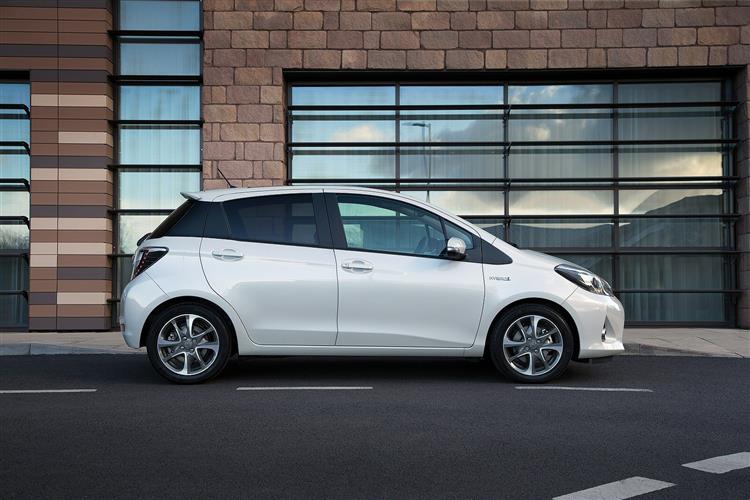