One of the perpetual pitfalls in buying a used car is that something will happen that will suddenly render it obsolete. Not utterly unusable, such as petrol no longer being sold, but subtly obsolete; 'people-don't-want-to-buy-it-anymore' obsolete. You see this in the luxury car market, where older designs without sat nav and Bluetooth really don't cut it as modern-feeling vehicles anymore. The same goes for sports cars that can't make decent fuel economy figures - they just seem hopelessly old hat. In contrast to all of that, we have the little citycar under consideration here as a used buy, Suzuki's Alto. It might have been introduced back in 2009, which seems an aeon ago now, but it's retained its relevance. It's cheap and cheerful, and that's enough for most buyers.

This seventh-generation Alto landed in British dealerships back in March 2009 and was an instant hit. At launch, it laid claim to being the cleanest five-door petrol car you could buy and it was cheap too. Like many of its predecessors, this design was built in India by Suzuki's partner company Maruti, whose Delhi factory turned out enough Altos to make this model one of the subcontinent's best-selling cars. In many ways, in its light weight, eager handling and simplicity, this was the modern equivalent of the original 1959 Mini. Except of course that in real terms, it cost around half as much as that car did. There are a few milestones in this seventh generation car's history that are worth noting. Suzuki launched a couple of special edition models, the 'SZ-L' in July 2010 and the 'Play' in February 2012. The most significant update to the Alto came a few months later, in April 2012, when the engine was modified to a Dual VVT system. This helped drop emissions below the 100g/km mark, meaning free road tax. At the same time, the Alto got a new design interior colour and fabric trim, new full wheel covers for SZ and SZ3 models and a dipping rear view mirror. 'Glistening Grey' metallic was added to the range at this time as an optional colour. Suzuki kept the price of the Alto manageable and at the end of 2013 were offering the cars VAT free, with prices starting at just £5,999 for the SZ model.

What You Getword count: 348

In a land where whole families somehow cram into tiny cars, there's not much market for three-door models in this Suzuki's home country of India, so it's no surprise to find the Alto range is five-door-only, with rear seat room being surprisingly generous. Four adults can certainly be seated pretty comfortably, even if they're six foot plus, with plentiful headroom making the interior feel light and airy, despite thick rear C-pillars that could occasionally represent a parking issue. The tiny 3.5-metre length means a necessarily truncated 129-litre boot and the car has quite a high loading lip. Of course, you can extend the capacity if you're only travelling two-up (to 367-litres), though you won't get a split-folding rear seat to access the space unless you choose the plushest version. And the styling? Well, it's a little more individual than previous models with huge teardrop headlights, a large grille and a sharply rising beltline above small 14-inch wheels. Inside, it's not quite as characterful and you'll certainly be aware of how little you spent. Exposed screw heads, rear windows that pop out rather than wind down, the lack of a glovebox and plenty of cheap grey plastics see to that. Still, it all seems pretty well put together and in a funny way, the simplicity is rather refreshing. A big binnacle directly in front of the driver contains a large speedo, with an LCD display beneath it including the fuel gauge; this top of the range model gets a rev counter in a separate dash-top pod. Standard equipment includes twin front and side airbags, anti-lock brakes with electronic brakeforce distribution to maximise their effectiveness, ISOFIX child seat mountings, power steering, remote central locking and electric front windows (though unfortunately, you can't control the front passenger window from the driver's side). Predictably, you have to stretch up to the plusher versions for things like air conditioning, a rev counter, traction control, curtain airbags, alloy wheels, front foglamps, a slip-folding rear seat and ESP stability control. There's a stereo built into the fascia, but it can struggle to make itself heard. 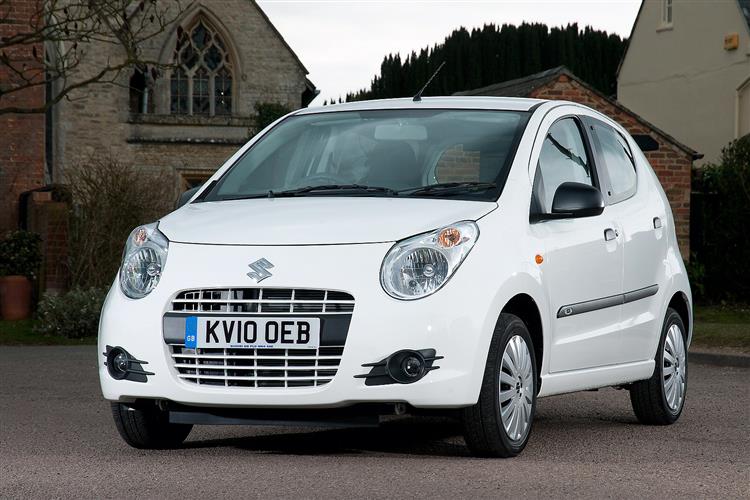