More dynamic, better equipped and cheaper to run than its predecessor, the original version of Toyota's second generation British-built Auris family hatchback offered more confident, sleeker styling, improved ride and handling and more efficient engines. Plus it continued its leadership in this segment when it came to hybrid power. The car represented a big step forward for the brand but does it represent a strong used buy?

We buy cars for all sorts of reasons, some sensible but others rather more personal. While it's the extreme designs that tend to grab the headlines, there's still a lot to be said for cars that simply work ever so effectively in the real world: like this one, the second generation version of Toyota's Auris. It's a family hatchback developed from experience that bought us the best selling car of this kind of all time, Toyota's Corolla, 35 million examples of which were sold in its lifetime before the first generation Auris model took over in 2007. This original Auris, its name derived from the Latin, 'aurum', for gold, arrived as a safe and sensible choice that built upon the strengths of its predecessor without threatening the Focus and Golf fraternity in any particular way. It did though, have the distinction of pioneering hybrid power in this segment back in 2010. But the world's biggest brand needed to do more in a market increasingly demanding more dynamic, appealingly styled, hi-tech and efficient products. With tough competition not only from the mainstream makers but also from up-and-coming Korean budget brands, it needed to bring us a car like this, the second generation Auris model, launched here at the very end of 2012. At its introduction, this model still led the way with hybrid power but could also offer more. Toyota claimed that the more mainstream choices had become more efficient and crucially, more desirable too. This car sold until mid-2015, when it was replaced by a facelifted version with a smarter interior and a much improved engine range.

What You Getword count: 674

If you're familiar with the look of the first generation Auris, then you won't be expecting what Toyota served up with this MK2 model. The original MK1 version wasn't a bad looker, just a little bit anonymous. With this replacement design though, it was as if everything had been sharpened and optimised to offer the much more extrovert visual statement that Toyota called its 'Keen Look'. The front features what in 2012 represented the brand's latest family face, with smeared-back headlight units that lent the look a bit of attitude and also visually widened things. It's not all stylist smoke and mirrors either. This car really is lower-slung than its MK1 model predecessor, the overall height 55mm lower and the chassis positioned 10mm closer to the ground to offer a more purposeful stance echoed by the more sharply raked windscreen. The belt line is angled a bit more sharply too to give a more dynamic wedge shape than the old car's frumpier profile, while blacked-out centre and rear pillars also aim at providing a sportier look. Despite an overall length increase of 30mm,Toyota is proud of the fact that this remains one of the most compact cars in the family hatchback class, though you might not think this to be a particularly good thing if you've a family of five to carry about. Fortunately, some very clever design ensured that buyers didn't tend to notice the slightly smaller dimensions. Take the reduced roof height, disguised by the way that the roof gently bulges over the passenger's heads. As usual in this class, three passengers will be a squash on the back seat, but thanks to 20mm more rear legroom and seat backrests that recline for greater comfort on longer journeys, two will be quite comfortable. Out back, there's slightly more bootspace than was offered by the MK1 model - 360-litres, which is more than you get in a Focus or an Astra of the period - or indeed other segment contenders of the time like SEAT's Leon or Peugeot's 308. That figure also applies right across the range, even to the Hybrid model, thanks to the relocation of that's car's battery pack to a position under the rear bench. It's easier to get at the cargo area too, thanks to a tailgate opening that's 90mm wider than that of the MK1 model. Once you've got your stuff in, the wide loadbay length is versatile to use thanks to a dual-level deckboard. Plus of course, if you need more room, there's the option of pushing forward the 60/40 split-folding rear backrest. If that's something you're likely to be doing quite often, then you're probably better off considering the 'Touring Sports' estate bodystyle which is 285mm longer and features a bumper sill 80mm lower for easier loading. Plenty of thought has also gone in up-front, where the seats have a wide adjustment range, plus there's a wide angle of steering wheel adjustment make it easier for drivers of all heights to find a comfortable position. As for the dash, well owners of the original Auris might be a little disappointed that the designers of this MK2 model dispensed with original version's dramatic-looking centre console that housed the handbrake and gearlever and arched up and way from the floor to form a kind of flying buttress. Instead, with the second generation version of this Toyota, they tried to smarten things up with various soft-touch plastics and brushed metallic finishes but despite all this effort, it doesn't feel as plush and up-market as some rivals. Still, build quality from the British Burnaston factory was strong, plus the layout remains ergonomically sound and is at least quite interesting than before, with the centre console in most variants dominated by an informative 'Toyota Touch' multimedia screen. Plus it's a practical interior, with four cup and four bottle holders, a sunglasses holder, a coin box, a sliding centre console armrest, three 12V accessory sockets and an AUX external input plug. A cabin, in other words, that you could really live with. 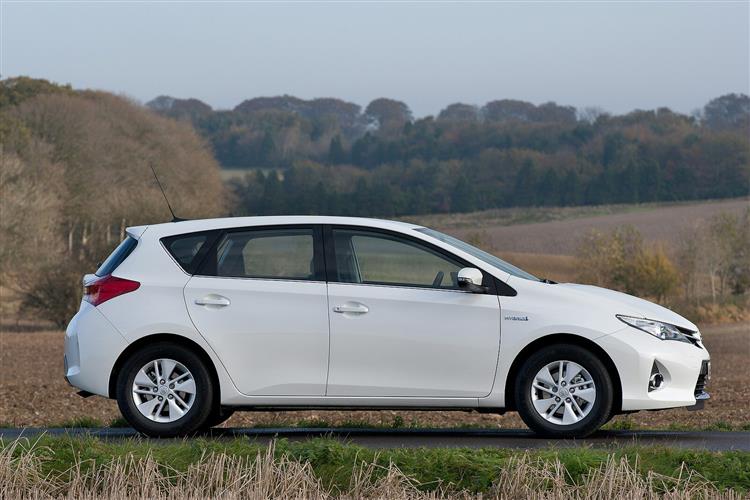