A LIKEABLE LEGACY (some text hidden)

Subaru decided to only offer its fifth generation Legacy medium range model in this country in its estate 'Tourer' bodystyle. This design was larger than its predecessor to try and elevate itself into content with executive class estates as well as Mondeo-sized models. Plus it offered the usual Subaru virtues - distinctive Boxer engines, all-wheel-drive and metronomic reliability. Does all that add up to a strong used car buy? Let's find out.

Throughout its production life between 1989 and 2014, Subaru's Legacy tried to offer family estate car buyers a different approach. Four-wheel drive security for the price of 2WD mediocrity. Flat four engines unique enough for you to miss their distinctive thrum once you'd moved to something more mundane. And a refreshing approach to design that set this design apart in a sea of ordinary alternatives. All that worked for this car in the Nineties and Noughties but by the time the fifth generation was launched in 2010, it was clear that a little more might be needed to sustain sales. Being different might no longer be quite enough. In this guise, the UK importers decided to limit themselves to the Tourer estate bodystyle and in this form, the MK5 Legacy was usefully bigger than before, making it a more realistic alternative to Executive-class 4x4 estate cars like Audi's A6 Avant quattro and Volvo's XC70 as well as a Mondeo-sized models like the Skoda Octavia Scout. This increase in size also enabled this legacy to to distance itself from Subaru's more affordable Forester 4x4 estate. So we've this longer, wider, taller and in every way bigger Legacy. Will it be a bigger draw? Let's find out.

What You Getword count: 427

With its added bulk, this fifth generation model became a more imposing sight on the road. You couldn't call it pretty but it does look lower and wider than the previous MK4 model, with muscular curves around the front end. There are the usual SUV-like prominent wheel-arches, while the strong belt line and a chrome-rimmed glass-house are intended to give a premium feel. Whether you agree with that or not, what's not in doubt is that this fifth generation Legacy was usefully bigger than its predecessor against virtually every criteria you could care to name and that shows up where it's most important - inside. Owners of older Legacys might miss the frameless doors that were a feature of previous models but once seated, they'll certainly notice the much bigger cabin, its size hardly surprising given that most of the external dimensions are up by around 50mm over the MK4 model, along with an 81mm wheelbase increase. That equates, amongst other things, to 21mm more front seat headroom than the fourth generation Legacy could provide. At the wheel, though there's nothing really to catch the eye, the dash design offered a step forward in quality from anything Subaru had offered us prior to the launch of this car in 2009. There's an electrically operated seat to help you find the ideal driving position and all the major controls fall easily to hand, though the electronic parking brake can be a little awkward to find. Rear seat passengers, like those at the front, also benefit from the extra space on offer, enjoying 99mm more rear seat legroom and the ability to recline their seats to better while away longer journeys. We've already talked about the way this car is quite the match of rivals like Skoda's Superb Estate 4x4 and Volvo's V70 AWD for interior space. We'd also add that the fifth generation version of this car is a realistic alternative to even pricier stuff like BMW's 5 Series Touring or Audi's A6 Avant. This is perhaps most obvious when it comes to bootspace: paying lots more cash for, say a BMW 5 Series Touring or an Audi A6 Avant certainly doesn't buy you any more and though this Subaru can't quite match Skoda's Superb Estate, it can in this MK5 guise equal or better the class favourite, Volvo's V70, in just about every dimension. The Legacy's space is easy to access too, thanks to the ease of seat-folding courtesy of well placed levers, located just inside the tailgate. Using these increases luggage capacity from 526 to 1677-litres. 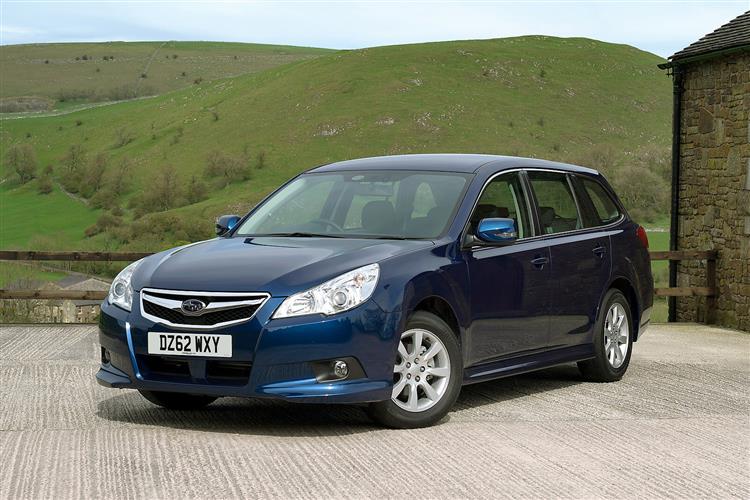