THE GERMAN OPEN (some text hidden)

Porsche doesn't build everyday sportscars. It builds sportscars for everyday use, models like this one, the 911 Cabriolet. Open topped driving is integral to the Porsche legend, dating all the way back to the convertible 356 of 1948 and its descendant, the 550 Spyder. Will this seventh generation '991' series 911 Cabrio be as sought after in half a century's time? Don't bet against it. Let's check it out as a used car buy.

The 911 Cabriolet. Enthusiasts take its existence for granted today but in truth, it took them a very long time to come to terms with the idea of a fully open-topped version of this iconic sportscar. Almost as long in fact, as it took Porsche to create one in the first place. You can understand why. After all, the easiest way to spoil the handling balance of any vehicle is to chop the top off it, something Stuttgart's engineers were very nervous about doing. Three years after the 911 coupe's original launch in 1963, they brought us a compromise solution in the form of a Targa model, a kind of halfway house between coupe and convertible which used an ugly stainless steel rollbar to preserve that all-important torsional rigidity. But it wasn't enough to dull a clamour that continued over the next fifteen years for a proper open-top. Finally, in 1982 as production of the second generation G-Series model wound towards its close, the factory at last felt confident enough to give us a proper 911 Cabriolet. Initially, this model was seen as a 'softer' type of 911 - the kind of car likely to appeal to people who might otherwise buy sporting Grand Tourers like Mercedes' SL or maybe a 6 Series BMW. But as the 911 generations came and went, the factory continually perfected the cabriolet concept and by the time of the launch of the sixth generation '997' model series in 2004, there was virtually no discernible difference in the handling stiffness of fixed and soft-top models. In fact, just about the only thing that was missing from the fully open version was the iconic curving 911 roofline. With the launch of the seventh generation '991' series version in late 2011, fresh convertible top technology enabled even that to be added to Cabriolet models: never before had Cabrio and Coupe been so similar. And never had the 911 been better, with fundamental changes that went deeper than any since the old air-cooled versions. This is the 911 Cabriolet model we look at here as a used car, a model that lasted until the all-turbocharged 911 Cabriolet range arrived in late 2015.

What You Getword count: 844

Traditionally, the Porsche 911 has always offered buyers one of the most distinctive shapes on the road - or at least it has in fixed-top form. The Cabriolet version though, has long lacked the same visual uniqueness for until the launch of this seventh generation model series, the designers were unable to replicate the distinctive sweeping roof curvature that has always set the Coupe version apart. That all changed with this '991' series model. Thanks to a cleverly designed panel bow top, this version looked every inch a proper 911, the fabric roof tensioned in an elegant arc from the front window frame to the convertible top compartment. This was still the most compact car in its class, with the curvy shape and the trademark wide-arched wings both present and correct. Perhaps the evolutionary styling undersold quite how dramatically different the engineering that underpinned this 991 series seventh generation car was. Ninety per cent of the ingredients were different after all. Still, 911 buyers tend to be a conservative bunch and the aesthetic continuity protected the resale values of the old 997 generation car, which made a lot of loyal customers very happy indeed. This seventh generation model was a bigger car than before with a wider track, less overhang at the front and rear and a ride height that sat it 3-4mm closer to the ground in Cabriolet form. There was a slippery 0.30cd drag factor and a lightweight approach too, with the use of aluminium-steel composite construction that made the body up to 18% more torsionally rigid, yet shaved up to 60kg from its total bulk. Some of the most obvious changes were made at the rear, where the triple-slatted engine cover and slit-like LED rear lights were obvious departures from the previous model. The front revisions were a little more subtle, with reshaped larger side air intakes and repositioned door mirrors. On to that redesigned hood, made up of four magnesium segments and able to be raised or lowered in 13s either with a button on the keyfob or by pressing a switch between the front seats, the one you'll be using when operating the top at speeds of up to 31mph. When retracted, it fits into an impressively small space below a neater compartment lid that now extends back to the rear spoiler for a cleaner look. Top-down, the other clever innovation you'll notice is the built-in electric wind deflector that really cuts down cabin wind buffeting when you're not using the rear seats. No need here for the fiddly extra cost contraptions you have to have with rivals, fiddly things you're normally forced to store in the boot, then slot into place like a Mecano set as you break your fingernails on the catches. Instead here, the deflector glides out of a space above the top of the rear seats and slots itself into place at the push of a button, something you can do at speeds of up to 75mph. It's one of the things that would really sell us this car. And inside? Well if you're familiar with the old sixth generation 997 series 911 model, you'll find that everything's changed - yet nothing is different. So, as ever, you slide behind the wheel to find traditionally upright dash with an instrument cluster dominated by a large central rev counter, flanked by two circular dial spaces either side. But look a little closer and the changes start to become evident. For a start, it feels a slightly bigger car as the windscreen is now a touch further away and you're hemmed in by a high centre tunnel. And then there are all the modern touches. The electronic handbrake. And the read-out to the right of the rev counter that isn't actually a dial at all but instead turns out to be a high resolution multi-function screen that can display anything from a sat nav map to a G-forces meter. The rising centre console design echoes that used in the old Carrera GT supercar and includes a larger 7-inch colour touchscreen for the Porsche Communications Management system that controls a vast array of functions. Most importantly, everything is of significantly higher quality than before, truly a cabin now worthy of a six-figure sportscar. Unlike Porsche's other convertible model, the smaller Boxster, 911 buyers get a pair of occasional rear seats and we'd hoped that the 100mm increase in wheelbase you get in this seventh generation design might have made them more usable. Sadly not. Though there's a bit more headroom here than there was before with the top up, a marginal 6mm more legroom means that they're still really for child use only, though for a family buyer, very useful at that. The extra wheelbase does tell however, when it comes to bootspace here, as in every 911, located beneath the bonnet. As with the Coupe version, there's 135-litres on offer - or at least there is in the 2WD models. In Carrera4 variants, you'll need to bear in mind that the space available falls to just 125-litres. 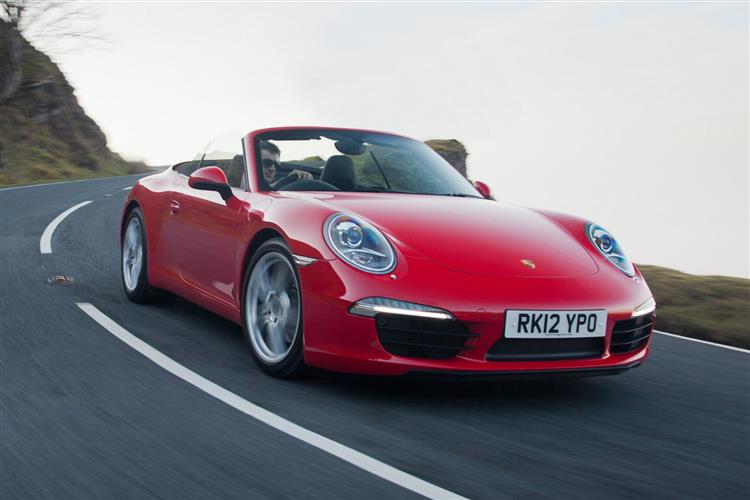