A JOURNEY INTO SPACE (some text hidden)

You'd think that space, value and sheer capability would be priorities for MPV buyers. The sales figures might suggest otherwise but if these remain key criteria in your search for a truly practical used seven-seat People Carrier, then it's well worth considering this one, SsangYong's Turismo. Based on the brand's old Rodius model but far smarter looking, it's certainly not a conventional choice and it comes from a Korean maker that may be unfamiliar. Still, in terms of sense and sensibility in this segment, there's not a lot to touch it. Here, we're going to look at the original version of the post-2013 model.

Searching for a properly spacious family People carrier can be a frustrating process. Let's assume that, quite reasonably, you want a seven-seat MPV that can actually seat seven people, not five adults and two midgets at the very back. So a Grand Scenic-sized compact model won't suit. And that, just as reasonably, you want those seven folk to be able to bring a decent amount of luggage with them. So a Ford Galaxy or a Volkswagen Sharan still won't be quite big enough. You'll need a diesel engine to keep running costs down - and a reasonably sized one so that there's plenty of pulling power when heavily laden or when towing. You a want a proper car, not a van with seats and windows. And you'll need to keep within a realistic family or business budget. It's a perfectly reasonable set of requirements that very few models can meet. Here's one of them. For SsangYong, being able to achieve all of this with one product is nothing new. In 2004, the brand introduced the Rodius, a huge People carrier built on a 1990s Mercedes E-Class platform that shared its chassis with a luxury saloon called the Chairman that the company had made for its home South Korean market. A Rodius could tick all the buying boxes we've just listed, which ought to have made it a huge worldwide hit. Which it might have been but for ungainly styling which continued to prove a sales impediment even when SsangYong replaced the car's thirsty old five cylinder Mercedes diesel engine for its own far more efficient four cylinder unit in 2012. Cue the £100 million investment that in 2013, brought us the Rodius as it always ought to have been, with a new name - the Turismo - and smart sensible styling that now clothed the previous model's hugely practical '2-2-3' seven-seater cabin layout. Thanks to the restyle, dealers found it much easier to get potential customers behind the wheel to experience SsangYong's more efficient e-XDi diesel engine. Once there, sales folk could point out to them not only all of the space and value boxes this car could tick but also the fact that almost uniquely, this MPV could be ordered with high and low ratio 4WD, opening up People Carrier ownership to buyers who previously, in the search for a seven-seater tow car, had to put up with a clunky large SUV. On paper, it all added up to one of the best value, the most capable and the most practical 7-seat MPV on the market. In the 2013 to 2015 period though, SsangYong remained an unfamiliar brand in the UK and buyers were wary, so this original version of the Turismo remains a relatively rare sight on our roads. In early 2016, this car's 2.0-litre e-XDi diesel engine was replaced by a more efficient, more powerful 2.2-litre unit. What You Pay 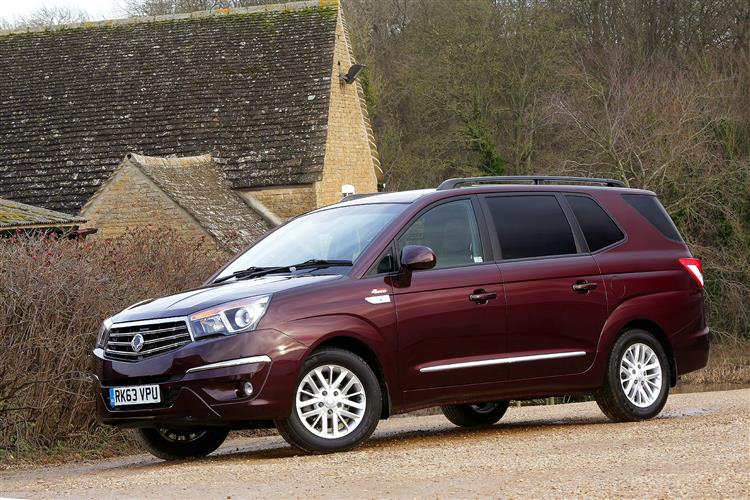