VALUE TO THE OPTIMUM? (some text hidden)

If you've never considered owning a medium range Mondeo-sized car with a Kia badge on the bonnet, then you're not alone. But you've probably reckoned without the brand's striking-looking Optima, a car launched in 2012 with the aim of winning new friends for the Korean maker in this segment. How does the original version stack up as a used buy?

We think differently about Kia these days - or at least many of us do. Those who've taken the trouble to note the Korean maker's increasing excellence when it comes to cutting edge citycars, superminis and SUVs. Prior to 2012 though, the broadly business-based market for Mondeo-sized medium range models had never taken Kia seriously, so the Korean brand launched this car, the Optima. Sleek, head-turning looks added the 'want one' factor previously missing from Kia's unremarkable offerings in this sector. But there was plenty of sensible stuff too, frugal diesel power matched with this rising brand's usual attributes of high equipment levels and strong value. All of which was just as well, for products like Ford's Mondeo and Volkswagen's Passat set the bar high in this segment. Kia reckoned it was fine with that, pointing to this model's great success in other markets, especially Korea and the USA. In the UK though, the Optima's prospects were limited by the availability of but one saloon bodystyle and a single diesel engine. For that reason, the original 2012 to 2015 first generation version is a relatively rare sight on the used market - but a potentially tempting one.

What You Getword count: 460

Once again here, Kia has much to thank Chief Design Officer Peter Schreyer and his team for. Conceived in Frankfurt and California, this Optima's clean-sheet design approach offered us something longer, lower and wider than anything the Korean brand had previously bought us in this segment. True, not everyone will like the big expanse of metal around the rear C-pillar but it is unusual and offers just a hint of the coupe-like feel that Schreyer was apparently seeking. Overall, the wedgy shape with its high, hunched shoulders and low glasshouse would suit a premium badge. And that pretty much says it all. Take a seat at the wheel and there's a musical welcome you can't imagine receiving in a Passat. And cabin materials more suited to the lower family hatchback segment. But if a premium feel is missing, then compensation comes in terms of careful design, plenty of features and solid build quality suggestive of Kia's consistently strong rankings in the annual JD Power Customer Satisfaction surveys. This is one of those so-called 'aircraft cockpit-inspired' cabins - which broadly means that the fascia has been slightly canted towards the driver so that all the major controls are in your sight-line for best visibility and ease of use. Personally, we're keener on the little touches. The clever auto de-fogging system for the solar glasswork, the sunglasses holder, the cooled glovebox that you get right across the range, not just on the plushest models. Oh, and the aero blade wipers which have been specifically designed not to squeak in the rain. On top of that, there's the purpose-designed 12-speaker premium Infinity audio system that's fitted to plusher models and for us is an Optima must-have, far better than the much pricier systems you get on many luxury cars. Move into the back and the good news continues. Thanks to a longer wheelbase than anything Kia had previously provided in this sector, this car is up with Ford's Mondeo and Skoda's Superb in the amount of rear sat space on offer - and that means there's a great deal. Not so much in terms of width - though there is more elbow room than you'd get in an Insignia or a Passat. More in terms of legroom. Someone 6ft 4ins can easily sit behind someone else of the same size and as a result, more modestly proportioned folk will really feel as if they can spread out. Luggage room isn't quite as expansive, but get through the rather narrow loading aperture and you should find 505-litres will be quite enough for your ordinary day-to-day needs. If it isn't, you can as usual, push forward the split-folding rear bench to extend the space, though the backrest don't fold anywhere near flat when you do. 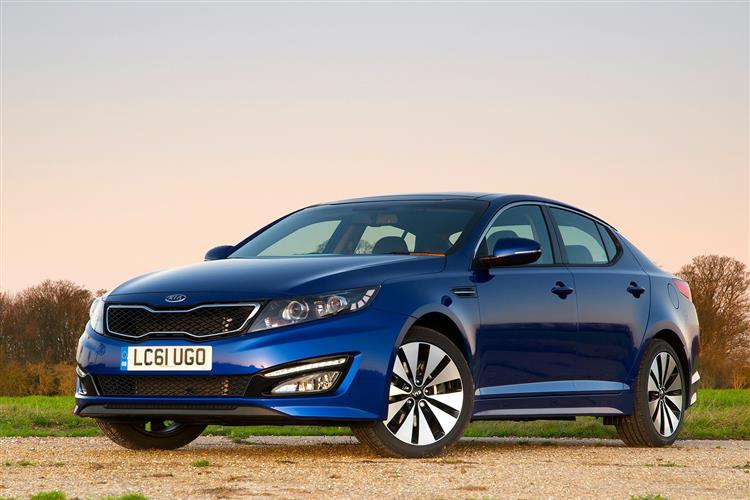