Following its original launch in 2010, Citroen's DS3 supermini proved to be the strongest Citroen sales success story of recent years. In 2014, to keep its appeal current, it was lightly refreshed with more efficient Euro6-compliant engines, smart new lights on selected versions and some extra hi-tech equipment options. Otherwise, the recipe was much as before, with a three-door-only range of hard-top or Cabrio models, striking practical design both inside and out, a range of proven engines and a huge variety of personalisation options. The car sold in this form until re-branded as a fully-fledged 'DS' model early in 2016. Do these later 'Citroen'-badged versions make good sense as a used buy?

'DS' stands for 'Different Spirit', two words first associated with Citroen back in 1955 with the launch of the very first DS, the iconic original model, at the Paris Motorshow. Not only was it gorgeous but with features like disc brakes, hydropneumatic suspension, a semi-automatic gearbox and power steering, it was years ahead of its time. When, just over half a century on in 2010, Citroen once again brought us a car badged DS, this DS3, it got people talking in just the same way. As you may already know, the DS3 is a trendy small car in the MINI or Fiat 500 mould. Nothing especially ground-breaking about that, you might think - but stop and consider for a moment. Before this Citroen arrived, established thinking suggested that a fashionable little urban trinket of this kind had to have a 'retro' look, with style harking back to an older classic model: all very nice but also pretty cramped when it came to carrying people and packages. So the DS3 has set out to turn that thinking on its head, fresh in style and practicality but also as interesting and innovative as anything else in the trendy small car segment. Other brands have tried the same thing but with this model, only Citroen truly succeeded. Following this design's original launch, the DS range was quickly expanded with larger offerings, first the DS4 in 2012 and the DS5 in 2013. It was this DS3 though, that continued to sell most strongly, the range expanded with the addition of a cute fabric-topped Cabrio version in 2013. In 2014 though, the model faced its toughest challenge yet with the introduction of an all-new version of its closest rival, BMW's MINI. At the same time, substantially revised versions of two of its other close competitors, Fiat's 500 and Alfa Romeo's MiTo, also hit the market. Citroen's response was to smarten the looks, add some clever hi-tech equipment options and add a couple of highly efficient diesel engine options. All that created the 2014 to 2015-era DS3 range we're going to look at here, the models that were the last to sell under Citroen badges before the car was re-branded as a full 'DS' product early in 2016.

What You Getword count: 784

To the uninitiated, the DS3 is still quite a sight. The basic shape of the car is traditional supermini with gentle curves marking its extremities and the wheels pushed out to the corners producing a squat, purposeful stance. The real drama, however, is in the detail. From that 'shark fin' B-pillar and the contrasting roof panel to the vertical strips of LED running lights that flank the front grille and the distinct sill line connecting the wheelarches, the DS3 is ferociously unconventional. With this updated version, buyers of D Sport variants got even trendier LED Xenon headlamps with smart sequential indicators and greater efficiency. As with a MINI, original buyers got endless possibilities for personalisation - even your key could be matched to the paintwork - and there was plenty of scope for customers' cars to look as stunning (or as stunningly bad) as they liked. Take the roof. On fixed-top versions, it could be ordered not only with a contrasting colour but also with decals - leopard print and polkadots for example. Those who went for the Cabrio model could choose from three different roof designs: the standard Black, 'Moondust Grey' - which features the DS logo - and so-called 'Infinite Blue' with fabric that weaves in different coloured threads of blue and violet, each reacting differently to the light. Talking of the Cabrio version, at first glance you'd be forgiven for not realising this to be a soft top variant at all. After all, the profile of this model is identical to that of its fixed-top counterpart, the fabric opening section limited to the very top of the car. Actually though, the roof mechanism is quite sophisticated, made up of over 180 different parts and electrically operated by a button on the overhead console that works to three main settings - 'intermediate', 'horizontal' and 'total' - all of which, impressively, are accessible at any speed up to 75mph. Prodding the button once will slide the canvas back so that it concertinas like a busker's accordion above a rear screen which, if you continue to press the button, will hinge forward to lie on the parcel shelf, before the folded canvas sandwich motors back to take its place. As with the folding tops provided by most rivals, you'll find that when retracted, this one almost totally blocks rearward vision - hence the standard parking sensors. The roof acrobatics take only 16s from start to finish and when the whole thing's open, there's a pop-up wind deflector that springs out of the top roof rail to quell the worst of the turbulence. Of course, when you do have the roof down, you don't want it to take up so much space at the back that there's no room for people or packages. In this DS3 it doesn't. Take rear cargo space, accessible via a cantilevered bootlid that rises neatly outwards and upwards in a circular motion that means you can open it even when parked close to obstructions. It's unfortunate that once it is open, the aperture available is pretty small, though actually, the capacity on offer is greater than it first appears - 245-litres in all, just 40-litres less than you'd get in the ordinary hatch version. That's 30% more than you'd get in a rival Fiat 500C and twice as much as you'd find on a rival MINI Convertible. Plus you can extend it by folding down the same 60/40 split-folding rear bench you'll find on the DS3 hatch, revealing up to 980-litres. Even more impressive, given the size of this car, is the rear seat space on offer. Getting into the back isn't quite as easy as it would be in a full-blown soft-top like a MINI Convertible because you have to duck under the roof pillar as you would in any three-door hatchback. Once you're there though, there's an unusual bonus. This is the only model its class - and one of the very few convertibles you can buy - that can actually take three people across the back seat. True, space is fairly tight back here, but it's OK for short journeys and fine for kids. At the wheel, you get the high quality cabin ambience that's always marked out this DS3, with its piano black finishes and cool white lighting. The instruments are set into a trio of circular dials, in a motif that appears again in the round clusters of ventilation controls on a centre console you can colour-match to your own personal choice. With the exception of an armrest that slightly impedes the handbrake, the control layout is pretty faultless with an upmarket feel and a small, grippy leather-covered steering wheel that feels good to hold. 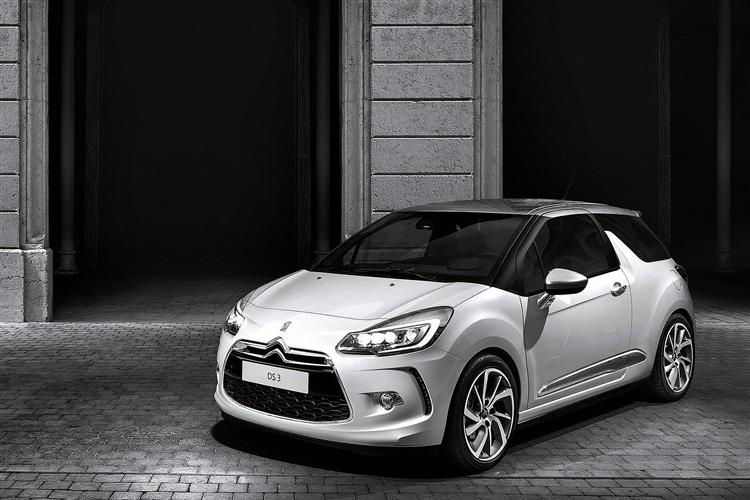