The facelifted post-2011 version of Volkswagen's first generation Tiguan targeted compact SUV and Crossover customers alike with a high quality, well priced package that was smarter and more efficient. All the 4x4 you'll ever really need? Many saw it as just that. Let's check this model out for used car customers.

If you're looking for a compact SUV or family-sized Crossover from the 2011 to 2016 era, then you'll certainly not be short of choice. But choice can sometimes be a compromising thing - and so it is here. So for the premium badge you'd like on a car of this kind, you have to compromise on equipment. For the practicality you'll need, you have to compromise on trim and build quality. And for the all-wheel drive ability you'll maybe sometimes want, you've to compromise on tarmac driving pleasure. Volkswagen understands this, which is why in 2008, they brought us this car, the Tiguan, a contender in this class that was arguably less compromised than any other. Especially in the rejuvenated guise that arrived here in the middle of 2011, the model we're focusing on here as a used buy. The Tiguan proved to be a hugely successful car for Volkswagen and the reasons aren't hard to fathom. Here, you got all the class of a Land Rover Freelander or a Toyota RAV4 at a significant saving in cost, pricing being not too much more than Far Eastern budget brand models in this segment. The dynamics strike an appealing balance too, with tarmac travel to a standard not too far off a Qashqai or Kuga-like pretend-SUV Crossover model matched with off road ability far in excess of what cars of that kind could ever consider. It all meant that, with not too much being broke, there wasn't a great deal to fix when the time came for VW to facelift this MK1 model Tiguan in 2011. In the end, we got a smarter look, a range of slightly pokier more efficient engines and some useful splashes of high technology. Would that be enough, commentators at the time wondered, to keep this model competitive in a sector brimming with ever-toughening competition? It turned out to be. This improved Tiguan sold steadily for the brand until its replacement by an all-new MK2 model in the Summer of 2016.

What You Getword count: 418

The Tiguan has always been smartly but inoffensively styled. Hardly 'powerful and muscular', apparently the qualities that the design team were aiming at. You couldn't really apply those adjectives to the look of this revised post-2011 version either, but its looks were an improvement, Klaus Bischoff and his stylists neatening up the front end with the same kind of horizontally-lined grille used on the larger Touareg luxury SUV. Double-chromed louvers and daytime running lights in the optional bi-xenon headlamps completed the more up-market look. Moving towards the rear, there are some thoughtful touches. Like the small plastic surrounds on the squared-off wheelarches that can be unclipped for off-road use and, if necessary, replaced afterwards. Most models have classy chromed roof rails and there are sharply-lit LED lights at the rear. Under the skin, as with the original version, it's all Golf hatchback-based, but this improved design uses a tougher modular sub frame that's partly steel and should be better able to withstand off road buffeting. At the wheel, you'd certainly think you were in a Golf were it not for the slightly raised driving position. The leather-trimmed wheel feels good to hold, is adjustable for both reach and rake and is perfectly positioned for quality switchgear that falls nicely to hand. It's a practical cabin too, with door bins that can accommodate a sizeable drinks bottle, plus there's a cooled glovebox, plenty of cupholders and most models feature under-seat drawers for both front seat passengers. At the rear, Volkswagen built in some of the flexibility used in its Touran mini-MPV. So the back seat bench can slide fore and aft by up to 16cm and recline by up to 23-degrees for greater comfort on longer journeys. If you're not using the middle part of the seat, it can be folded down to make an armrest with cupholder. As usual in this class of car, three adults would be a little squashed on the back seat but two will have decent standards of head, leg and shoulder room and three kids will be fine. Out back, there's 470-litres of total boot space and the option of a ski-hatch for longer items. If that's not enough, pushing forward the 60:40 split-folded rear bench frees up a total of 1510-litres. You can carry quite heavy loads too, thanks to a payload capacity of 670kg. And there are neat touches like extra under-floor storage, a 12v power socket and an optional luggage net to stop your eggs mixing with you Iron Bru. 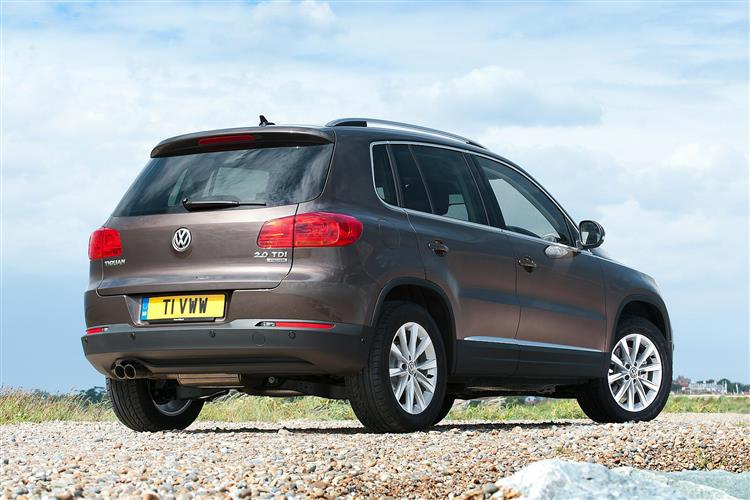