Designing Porsche's third generation '981' series Boxster can't have been easy. It needed to be better to drive than any of its key rivals, yet also affordable enough to slot comfortably below the Stuttgart brand's seventh generation 911 model. It would need to appeal to the German intent on thrashing it around the N??rburgring, the Floridian retiree with a golf bag in the boot and those inching through the Beijing rush hour. And, as with any new generation model, it would need to pull off the trick of being better built but lighter, quicker yet more economical and offering more equipment while issuing fewer tailpipe emissions. That's one heck of a balancing trick. Thing is, Porsche pulled it off. So does this car also make sense s a used buy? Let's find out.

Today, Porsche is a significant world automotive player. But the reasons why have less to do with the car everybody knows it for - the iconic 911 - and more to do with this one, the Boxster. This was the car that brought Porsche ownership within reach of the man in the street, offering the marque's classic design, technology and handling prowess at relatively affordable prices. Whilst the original version, launched in 1996, was no ball of fire, progressive incarnations have just got faster and faster. Purists used to Porsche sportscars with their engines slung out over the rear axle took a little time to adjust to the Boxster concept, forgetting that the very first car to bear the name 'Porsche' was in fact a mid-engined sports car, the legendary 356 No1. Those with ready chequebooks had no such hang-ups and were even prepared to put up with a few initial build quality glitches from the Finnish factory before the Germans tightened things up for the second generation design which arrived in 2004, shortly before a Cayman coupe version debuted a year later. There was a power upgrade in 2006 and a hi-tech PDK semi-automatic gearbox added in 2009. But all these tweaks were really just aimed at keeping this car ahead of lesser German rivals like BMW's Z4 and Mercedes SLK. A Porsche should be on a different plane entirely, a different proposition to match its very different price tag. With the introduction of this MK3 model in early 2012, that goal seemed in sight for the Stuttgart brand. This higher quality third generation '981' series design was, buyers were told, the ultimate Boxster, slightly bigger and a lot lighter, slightly faster and a lot more efficient. In other words, the car it always should have been. A more powerful 3.4-litre GTS model was introduced in 2014 and a 3.8-litre Spyder version arrived in 2015. The '981 Series' Boxster line-up lasted until 2016 when the normally aspired flat six engines of this '981' were replaced by the turbo flat four units used in the restyled '982' series car.

What You Getword count: 475

If you come to this car fresh from the previous MK2 model '987 Series' Boxster, the big news from a design perspective will be the way that this much improved car asserts itself more stridently. Boxsters always used to borrow body panels like the doors from the 911 but this one didn't - which is why it has more of a look and feel of its own. These deeply indented flanks, the massive side intakes and the wheel-at-each-corner stance ensure that the third generation Boxster could never be mistaken for a 911 drop top. When designing this model, Porsche aimed to keep a firm cap on weight. Extensive use of aluminium in the chassis is coupled with magnesium and steel where it's needed. The net result is that the chassis is 40% stiffer then before but weight is anything from 35kg to almost 100kg lighter, depending on which model and options you choose. The cabin feels relatively spacious, helped by the fact that an extra 60mm was grafted into this MK3 Boxster's wheelbase. As before, there are no rear seats but despite the car being 13mm lower than its predecessor, there's actually a little more headroom, thanks to a lower mounting position for these surprisingly broad seats. But what you really notice here is the greater feeling of quality, enough to lift this Porsche clear of Mercedes and BMW rivals from this era. Fit and finish are of course impeccable, the days being long past when Boxsters struggled on that score. And the choice of materials is faultless. You feel special in this car. The dashboard design is better too, with a slimmer centre console and a tidier look thanks to the fitment of an electrically operated handbrake and movement of the cupholders off to a slot by the glove box. Then there's the electrically operated hood, no longer covered by a separate panel when retracted and completely redesigned for this generation of Boxster with a sleeker profile that stretches further back along the car. Raise it, a process that takes nine seconds and can be done at speeds of up to 30mph, and you'll notice the fleece lined finish that claims to improve both thermal and noise insulation. You'll also notice that there's a proper glass rear window much bigger than before. The mid-mounting of the Boxster's flat-six engine has always been a big plus when it comes to practicality. Okay, so your service technician might not immediately agree, but you'll value the utility of having a boot at the front and one at the back, plus it's twin-boot layout leaves it with a luggage capacity of 150 litres in the front compartment and 130 litres behind the engine. Neither is as broad or practical as a hatched rear in a front-engined car, but such are the compromises one makes for mid-engined handling purity. 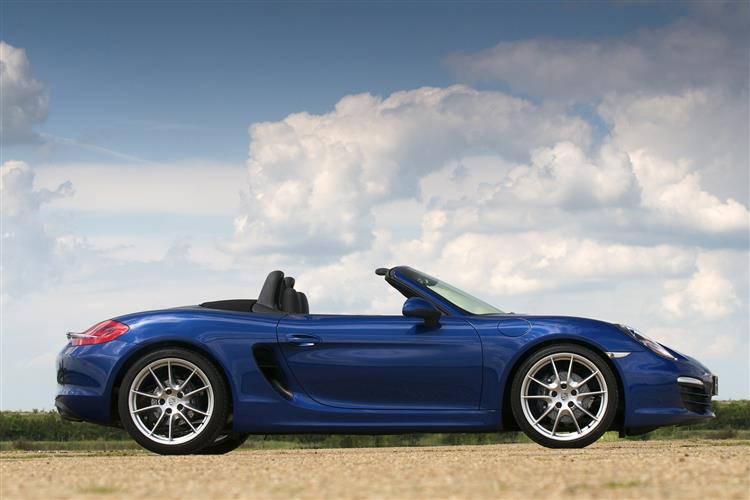