Renault's third generation Scenic five-seat MPV was further improved in 2013 to last it through to the launch of the fourth generation model three years later. Going for one of these last-of-the-line MK3 models might make very good sense for used car buyers looking for spacious family transport. A few of them might even be interested in the curious XMOD version that was introduced to generate some interest in this car in its aging years, this variant featuring SUV styling cues and a grip control system.

Renault likes to think it created MPV people carriers when it launched the Espace in the Eighties, though actually, that's not really true: the Americans were doing it long before. It is true however, to credit the French brand with originating the category we recognise with this car, that of the compact mini-MPV. The Scenic it launched back in the mid-Nineties has been through several very different generations, with the third generation design we look at here first launched in 2009. An upgrade in 2012 bought new engine options, extra equipment and a slightly smarter look but it wasn't enough to sustain sales in an MPV market fragmenting from all sides. So the brand gave this car a further significant wash 'n brush-up in the Spring of 2013 that included a more far-reaching facelift, extra new engine options and, most notably, the option of an SUV-orientated XMOD bodystyle including a Grip Xtend function for extra traction on poor surfaces. It's that car we'll be looking at here, which lasted until the MK4 model Scenic was launched in late 2016.

What You Getword count: 532

You probably won't be buying this car because of how it looks, but its shape remains sharp and clean, with a more contemporary front end in this 2013-2016 guise. This facelifted version got a larger Renault badge taking centre stage on the smarter bonnet. The A-pillars, the wings, the bumper and the headlights were also re-styled in pursuit of what the brand hoped was a stronger, sportier look. Details include black high gloss elements around the grille and the use of chrome trims around smarter LED daytime running lights. Go for the XMOD version and you get chunkier bumpers with silver skid plate-style inserts front and rear, special wheels, sill guards and chrome-finished roofbars. Whichever variant's right for you though will come with what Renault calls its 'flame-effect' line, a crease that starts beneath the headlights then sweeps rearward, further emphasising the plunging roofline. As before, this five-seat Scenic model is only 216mm shorter than its 7-seater Grand Scenic stablemate, which bodes well for the room on offer inside. And so it proves in the spacious, airy cabin with its large wide windscreen. At the wheel, the commanding driving position is complemented by a soft-touch sweeping dashboard design that shows how far Renault has come in recent times in its pursuit of perceived quality. As with previous Scenics, the three rear seats can be slid either backwards or forwards to maximise either back seat legroom or luggage space - and of course they can be tumbled forward with a relatively simple, if rather clunky three-point manoeuvre to increase luggage space to from 437 to 1837-litres, just 226-litres less than the Grand Scenic model. To put that into context, the top figure is about 100-litres more than you'd get in a rival Citroen C4 Picasso from this period. You can take the seats out completely too to free up yet more space, but even if you've got somewhere to put the things, the procedure is so complicated and awkward that you'll be finding excuses not to do it. Rivals with seat systems folding flat into the floor do it better. But then, the seats-folded 1837-litre capacity is probably about as much as most families will ever need and the Scenic builds on this with a further 92-litres of oddment space. Under-floor compartments, under-seat drawers, a huge chilled glovebox, centre console cubbies, door pockets and trays on the seat backs should help to keep the family's paraphernalia in check. We also like the way that the centre storage unit between the front seats slides forward so that it doesn't get in the way if you've pushed the middle rear seat right forward, as you might do to keep a better eye on a child in a booster seat. Talking of parental supervision, many original buyers also specified a useful extra mirror, mounted for the driver to more easily watch what the little horrors are doing. To keep them all quiet, there are three 12-volt power sockets around the cabin so that games consoles and MP3 players can be topped up. Overall then, if you don't need seven seats, there's probably enough flexibility here to justify this Scenic's premium over a conventional Megane-sized family hatch. 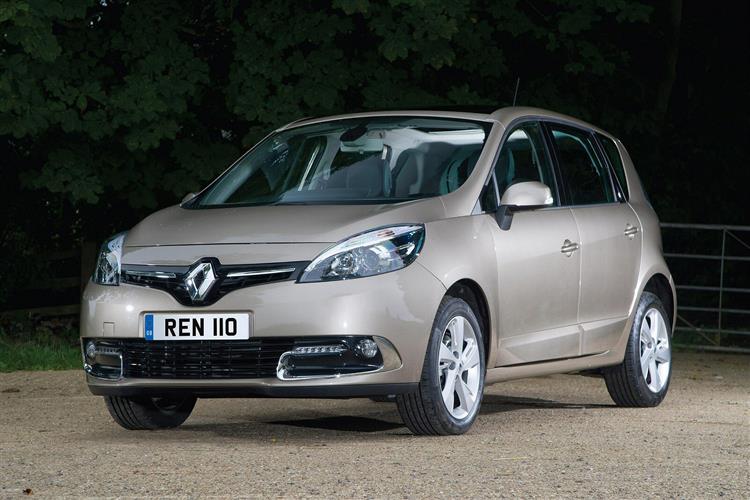