PICK UP A BARGAIN (some text hidden)

SsangYong's Korando Sports pick-up aimed to redefine the value proposition for customers in this commercial segment and provide them with rugged but car-like transport. Better to drive and more affordable than its competitors, yet better equipped, it was a five-seater Double Cab design that was as practical as buyers needed it to be and which came complete with the support of arguably the best after-sales warranty package in the business. But can it make good sense as a used buy? Let's see.

SsangYong's Korando Sports pick-up had a slightly easier time of it in the market than this Korean brand's passenger cars in the 2012 to 2016 era. Those models had to battle with badge prejudice against more established rivals, but this product sold happily to pick-up people who usually had no such hang-ups. They simply wanted the toughest, best value vehicle their funds could give them. And in many ways, this was it. SsangYong liked to promote the Korando Sports pick-up less as a commercial carrier and more as a passenger car with pick-up versatility. A blend of the suspension, engine and cabin finesse of a passenger car, the silhouette, space and seating for five that's typical of a double cab and the rugged workmanlike ability of a commercial pick-up. It all sounded good but what you got didn't quite deliver the finesse of pricier mainstream brand pick-ups in this segment. The Korando Sports was very affordable though and it sold steadily until it was facelifted and re-badged as the 'Musso' pick-up in the Autumn of 2016. What You Pay

What You Getword count: 434

SsangYong design has come a long way since the awkwardly styled Ken Greenly-penned Musso pick-up that was this Korando's predecessor. Premium brands don't usually sell in this sector, but if they did, a dynamic yet sophisticated look would epitomise the kind of shape they would want to deliver. Something like this? You might well think so. The mesh front grille, the trapezoidal bumper and the smart black headlamp bezels combine to create a purposeful front end, while in profile, a sharp belt line runs to the rear bumper, emphasising a sleek and, to some eyes, even mildly sporty stance. Inside, there's a light and airy environment thanks to large front, side and rear windows, while the careful blending of black and metallic finishes along with an LED illuminated cluster has created quite a smart and refined interior. It's at the rear though, where this Korando Sport holds an important advantage over its most direct rivals. The back seat in many a Double Cab pick-up seems often to be something of an after-thought, cramped for the feet and uncomfortably upright for the back. Some don't even provide the middle occupant with a proper three-point belt. There's none of that here. Not only is there plenty of room for head, shoulders, knees and feet but, rather uniquely, you can recline the rear seat back by up to 29-degrees. SsangYong's car-like claims for this Korando Sport might to some be suggestive of compromise in commercial practicality. That's not the case when it comes to size. A large, flat rear deck provides a 2.04m2 load area complete with a standard load deck liner and anchor points so that you can easily tie things down. And can those items be really heavy? Well yes - to a point. The use of car-like coil springs rather than a utilitarian leaf-sprung set-up means that early versions of this Korando couldn't match the one-tonne payload boasted by some rivals: this was put right later in the production run, so make sure you know what you're getting. Early variants offered a total payload that could be anything between 630 and 645kgs, depending on your choice between manual and automatic transmission. That may well be sufficient for most. Many original owners decided to add the optional rigid hardtop for all-weather protection and load bay security. It comes with a hinged rear window that closes behind the tailgate so that the car's central locking secures and protects the contents. And it's been styled and colour-matched to complement the rest of the car, so it doesn't look like a tacked-on after-thought, as do many retro-fit hardtops. 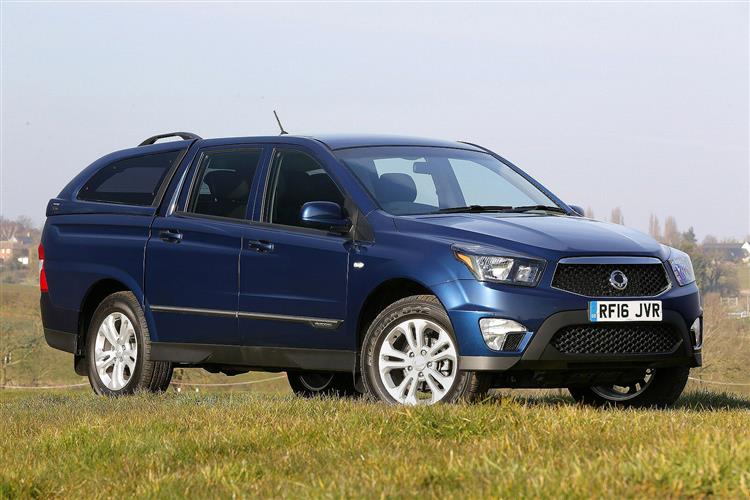